What older Americans need to know about taking Paxlovid 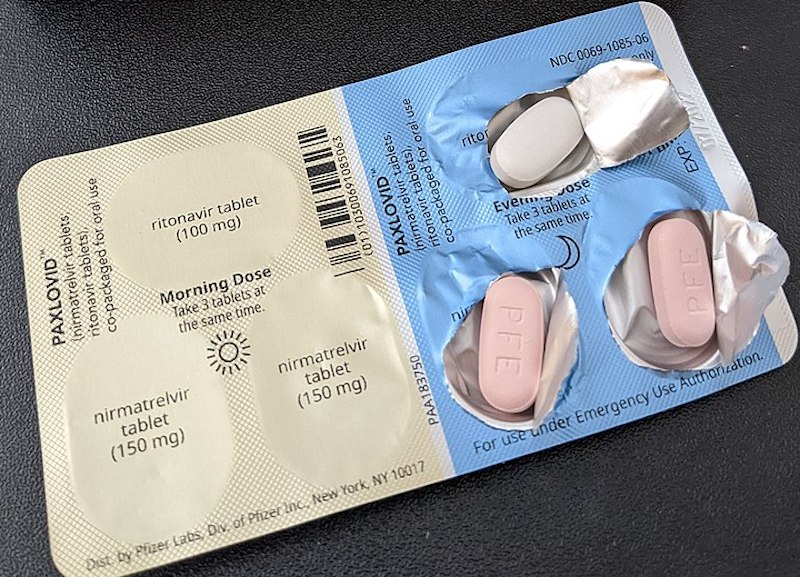 This article was originally republished by Kaiser Health News.

A new coronavirus variant is circulating, the most transmissible one yet. Hospitalizations of infected patients are rising. And older adults represent nearly 90% of U.S. deaths from covid-19 in recent months, the largest portion since the start of the pandemic.

What does that mean for people 65 and older catching covid for the first time or those experiencing a repeat infection?

The message from infectious disease experts and geriatricians is clear: Seek treatment with antiviral therapy, which remains effective against new covid variants.

The therapy of first choice, experts said, is Paxlovid, an antiviral treatment for people with mild to moderate covid at high risk of becoming seriously ill from the virus. All adults 65 and up fall in that category. If people can’t tolerate the medication — potential complications with other drugs need to be carefully evaluated by a medical provider — two alternatives are available.

“There’s lots of evidence that Paxlovid can reduce the risk of catastrophic events that can follow infection with covid in older individuals,” said Dr. Harlan Krumholz, a professor of medicine at Yale University.

Meanwhile, develop a plan for what you’ll do if you get covid. Where will you seek care? What if you can’t get in quickly to see your doctor, a common problem? You need to act fast since Paxlovid must be started no later than five days after the onset of symptoms. Will you need to adjust your medication regimen to guard against potentially dangerous drug interactions?

“The time to be figuring all this out is before you get covid,” said Dr. Allison Weinmann, an infectious-disease expert at Henry Ford Hospital in Detroit.

Being prepared proved essential when I caught covid in mid-December and went to urgent care for a prescription. Because I’m 67, with blood cancer and autoimmune illness, I’m at elevated risk of getting severely ill from the virus. But I take a blood thinner that can have life-threatening interactions with Paxlovid.

Fortunately, the urgent care center could see my electronic medical record, and a physician’s note there said it was safe for me to stop the blood thinner and get the treatment. (I’d consulted with my oncologist in advance.) So, I walked away with a Paxlovid prescription, and within a day my headaches and chills had disappeared.

Just before getting covid, I’d read an important study of nearly 45,000 patients 50 and older treated for covid between January and July 2022 at Mass General Brigham, a large Massachusetts health system. Twenty-eight percent of the patients were prescribed Paxlovid, which had received an emergency use authorization for mild to moderate covid from the FDA in December 2021; 72% were not. All were outpatients.

Unlike in other studies, most of the patients in this one had been vaccinated. Still, Paxlovid conferred a notable advantage: Those who took it were 44% less likely to be hospitalized with severe covid-related illnesses or die. Among those who’d gotten fewer than three vaccine doses, those risks were reduced by 81%.

A few months earlier, a study out of Israel had confirmed the efficacy of Paxlovid — the brand name for a combination of nirmatrelvir and ritonavir — in seniors infected with covid’s omicron strain, which arose in late 2021. (The original study establishing Paxlovid’s effectiveness had been conducted while the delta strain was prevalent and included only unvaccinated patients.) In patients 65 and older, most of whom had been vaccinated or previously had covid, hospitalizations were reduced by 73% and deaths by 79%.

Dr. Christina Mangurian, vice dean for faculty and academic affairs at the University of California-San Francisco School of Medicine, encountered several of these issues when both her parents caught covid in July, an episode she chronicled in a recent JAMA article.

First, her father, 84, was told in a virtual medical appointment by a doctor he didn’t know that he couldn’t take Paxlovid because he’s on a blood thinner — a decision later reversed by his primary care physician. Then, her mother, 78, was told, in a separate virtual appointment, to take an antibiotic, steroids, and over-the-counter medications instead of Paxlovid. Once again, her primary care doctor intervened and offered a prescription.

In both cases, Mangurian said, the doctors her parents first saw appeared to misunderstand who should get Paxlovid, and under what conditions. “This points to a major deficit in terms of how information about this therapy is being disseminated to front-line medical providers,” she told me in a phone conversation.

Michael Osterholm, director of the Center for Infectious Disease Research and Policy at the University of Minnesota, agrees. “Every day, I hear from people who are misinformed by their physicians or call-in nurse lines. Generally, they’re being told you can’t get Paxlovid until you’re seriously ill — which is just the opposite of what’s recommended. Why are we not doing more to educate the medical community?”

The potential for drug interactions with Paxlovid is a significant concern, especially in older patients with multiple medical conditions. More than 120 medications have been flagged for interactions, and each case needs to be evaluated, taking into account an individual’s conditions, as well as kidney and liver function.

The good news, experts say, is that most potential interactions can be managed, either by temporarily stopping a medication while taking Paxlovid or reducing the dose.

“It takes a little extra work, but there are resources and systems in place that can help practitioners figure out what they should do,” said Brian Isetts, a professor at the University of Minnesota College of Pharmacy.

About 10% of patients can’t take Paxlovid because of potential drug interactions, according to Dr. Scott Dryden-Peterson, medical director of covid outpatient therapy for Mass General Brigham. For them, Veklury (remdesivir), an antiviral infusion therapy delivered on three consecutive days, is a good option, although sometimes difficult to arrange. Also, Lagevrio (molnupiravir), another antiviral pill, can help shorten the duration of symptoms.

Many older adults fear that after taking Paxlovid they’ll get a rebound infection — a sudden resurgence of symptoms after the virus seems to have run its course. But in the vast majority of cases “rebound is very mild and symptoms — usually runny nose, nasal congestion, and sore throat — go away in a few days,” said Dr. Rajesh Gandhi, an infectious-disease physician and professor of medicine at Harvard Medical School.

Gandhi and other physicians I spoke with said the risk of not treating covid in older adults is far greater than the risk of rebound illness.

Side effects from Paxlovid include a metallic taste in the mouth, diarrhea, nausea, and muscle aches, among others, but serious complications are uncommon. “Consistently, people are tolerating the drug really well,” said Dr. Caroline Harada, associate professor of geriatrics at the University of Alabama-Birmingham Heersink School of Medicine, “and feeling better very quickly.”