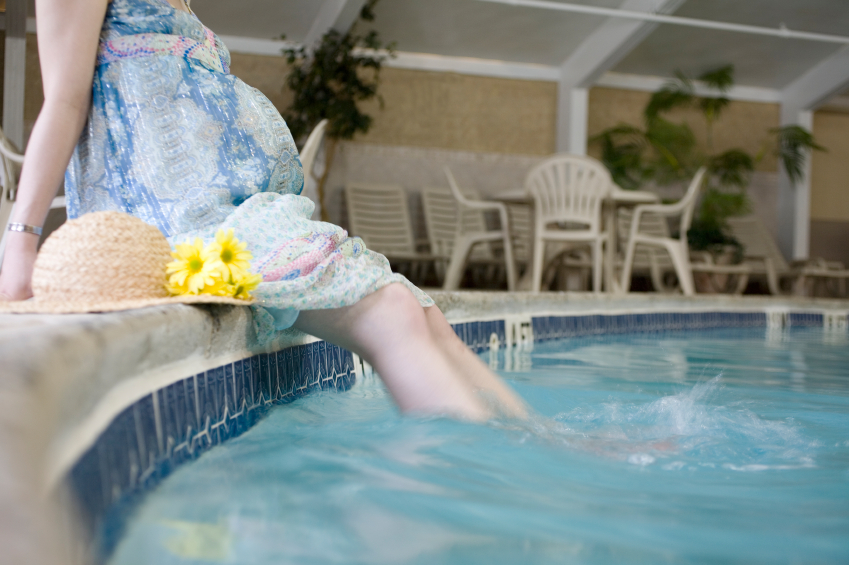 When Augstine Colebrook, a certified professional midwife, was starting up a new independent clinic, she was surprised to discover that alternative birthing options had gone mainstream.

“The only reason we have ‘waterbirth’ in our name is to find a way to distinguish ourselves from the hospitals, who have co-opted our name” as a birth center, said Colebrook, the executive director of the Trillium Waterbirth Center. “This is about attracting members.”

That point of differentiation has paid off. Business has been growing, and Trillium now operates a clinic in Grants Pass and another in Medford, which oversees about 100 births per year; about 90% of mothers labor in water, with 60% giving birth in the water.

“‘Water’ is the only modifier that when you add it to ‘birth’ is really innocuous; no one has anything bad to say,” Colebrook said.  “The imagery of a gentle water-like environment for mother and baby has surpassed everything.”

That’s not entirely true. A Portland couple is suing Legacy Health System for alleged negligence three years ago during the water birth of their son, who suffered a brain injury and was later diagnosed with cerebral palsy. In addition to $35 million in damages, the amended lawsuit, filed Jan. 14, seeks court action to stop Legacy from performing water births except as part of a clinical trial.

More and more women in Oregon and across the country are choosing to give birth outside of a hospital. Home births rose 41% nationwide between 2004 and 2010, and the number of babies born in a birth center jumped 56% from 2007 to 2013. At the same time, the number of water births is also rising, though the numbers are harder to track.

In fact, Oregon has one of the highest rates nationwide of mothers giving birth out of the hospital. The Oregon Section of the American College of Obstetrics and Gynecology reports that about 4% of the 42,011 live term births in Oregon in 2012 occurred out of a hospital setting, The women who plan to give birth this way tend to be older, white, married, college educated, less likely to smoke, and more likely to have inadequate prenatal care or none at all.

The out-of-hospital birth rate is as high as 10% in Portland, said Pamela Hines, the office manager in Tualatin for Andaluz Waterbirth Center, which has three locations in the Portland metro area. Together, they administered to 155 births in 2013, and 90% of mothers chose to be in the water at some point during their delivery.

There are plenty of options to choose from in Portland for a water birth. There are two other non-hospital birth centers, Alma Midwifery Services and Canyon Medical Center, and about 20 independent home-birth midwives, in addition to two hospitals.

“Water is another technique or option, like massage or positioning” during labor, Colebrook said. “It comes down to fetal risk assessment and fetal monitoring. That can occur in any location, whether in the hospital, at home, or in a birth center.”

Despite the lawsuit, Legacy continues to offer water births at its five family birth centers, according to the company’s website.  Oregon Health & Science University has offered the option for more than 15 years. Spokesmen for both organizations declined to provide any details or comment for this story.

Legacy invested in water birth as recently as last February, when it opened two water birth suites at Legacy Good Samaritan Medical Center in northwest Portland. In a press release announcing the new option, the hospital said that the known benefits of water birth include improved mobility for mothers, a more comfortable birthing experience, and a reduction in blood pressure, cesarean rates and the need for drugs and interventions, including episiotomies.

“Water births are known to speed up labor, promote relaxation, conserve energy and provide significant pain relief,” Legacy said in the statement, adding that the option is “recommended for women with low-risk, single pregnancies and who are physically able to get in and out of the birthing tub on their own.”

In their lawsuit, parents Matthew Marino and Amy Benton allege that Legacy misrepresented the safety of water births and cite a joint statement by the American College of Obstetricians and Gynecologists and the American Academy of Pediatrics last spring that advised against water births except as part of a clinical trial.

Richard Rogers, the attorney for Marino and Benton, told The Lund Report that Benton was an inappropriate candidate for a water birth because she had developed high blood pressure during her pregnancy, a condition known as pre-eclampsia.  In addition, she had never even heard of water birth before meeting with the hospital.

“Legacy told her that water birth was more safe than a traditional birth,” Rogers said. “Complete nonsense, totally untrue, but she believed it.”

However, a strenuous debate is currently underway about the safety of water birth. Soon after the joint statement by American College of Obstetricians and Gynecologists and the American Academy of Pediatrics, other organizations spoke up in defense of the practice.

Melissa Cheyney, an Oregon State University professor and a certified professional midwife, is also the chair of Midwives Alliance of North America division of research. Last year she found that “Being born underwater confers no additional risk to the newborn; however, water birth is associated with increased perineal trauma for the mother.”

The American Association of Birth Centers also found no evidence of risk. It analyzed data from 3,998 water births that occurred between 2007 and 2010 and were part of a sample of 15,574 obstetrically low-risk women eligible for birth center birth at the onset of labor.

"These data demonstrate that water birth, with careful selection criteria and experienced providers, does not negatively affect mothers or newborns,” the group said in a statement.

The association found that the rate of newborn transfer to a hospital following water birth was 1.5%, nearly half the rate for non-water births. There were also fewer incidences of transferring the mother to the hospital, or needing procedures for the newborn.

“It shows that midwives are making appropriate decisions. They’re getting the women out [of the water] who need to be out,” Colebrook said, explaining that a provider with proper training should be able to gauge when a labor is not progressing smoothly.

“These data do not show any difference in newborn outcomes between water birth and non-water birth,” the association found. “In fact, as seen in the present data, there are no reports of serious newborn outcomes, newborn morbidity or mortality and any neonatal intensive care unit admissions were typically resolved and discharged in 24 hours, but no more than seven days. There are reports of umbilical cord rupture, but not at a rate higher than seen with non-water birth.”

Midwives insist that even if the statistics prove that water births are safe, they still miss a larger point about the mother’s emotional well being.

“The hard thing to communicate in numbers and facts is that childbirth is a complex, hormonally driven, physiological experience. It’s a very emotional, mental experience,” Colebrook said.