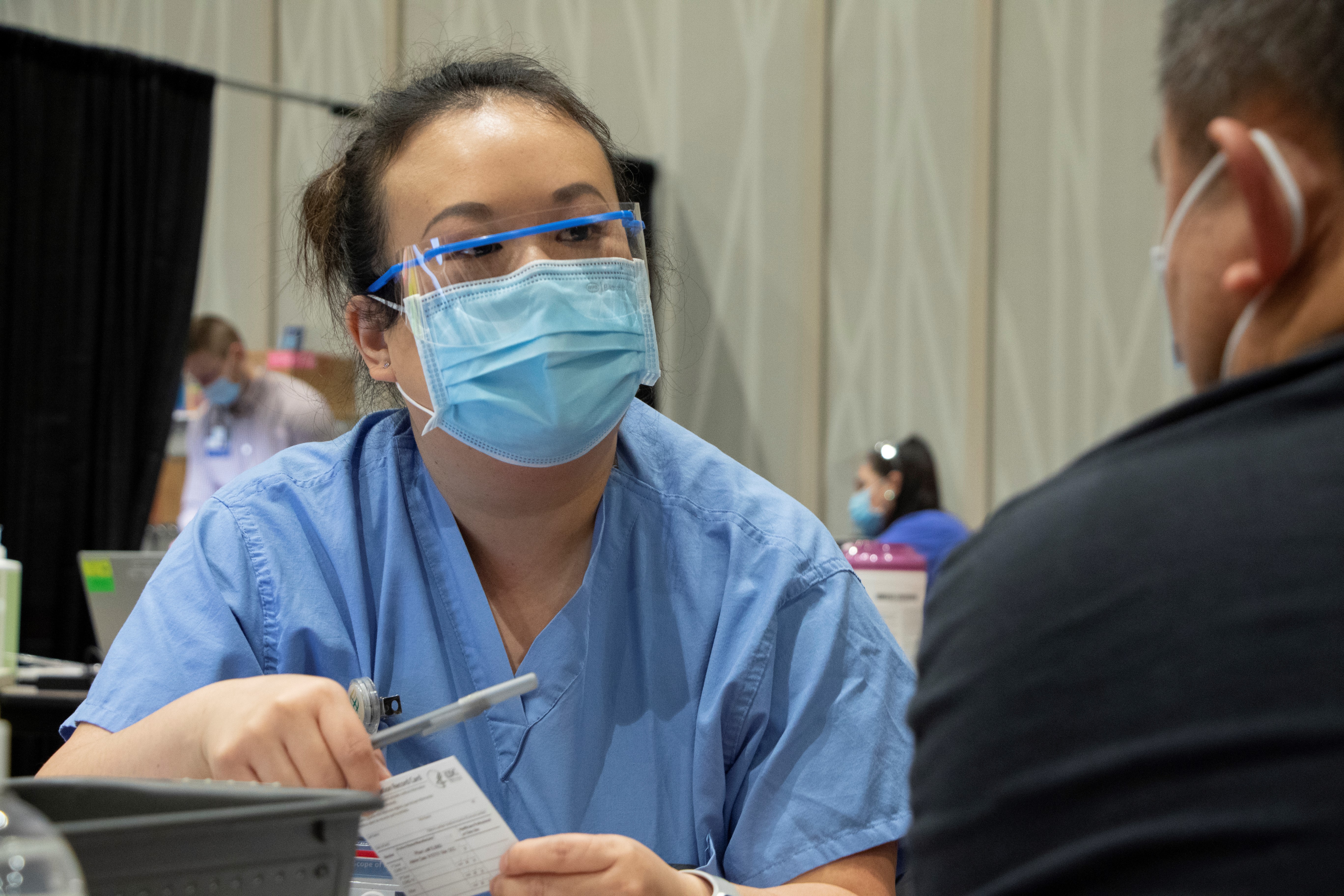 Oregon has identified four so-called breakthrough cases of people who tested positive for COVID-19 after they received both doses of the vaccine.
Public health officials on Friday said they’re not surprised, and the cases are a reminder that the vaccinations are not 100% effective. However, the vaccines do provide protection about 95% of the time, they said. And vaccinated people who then catch the virus experience weaker symptoms, they said.

Two of the breakthrough cases were in Yamhill County and two in Lane County; the people had either no symptoms or mild symptoms, state epidemiologist Dr. Dean Sidelinger said.

A case is labeled a breakthrough only after the person tests positive at least two weeks after full vaccination. Sidelinger said the breakthrough cases “are not unexpected,” but the state will do genomic sequencing to glean more information. So far, nearly 178,000 people in Oregon have received both doses, so the number of identified breakthrough cases is small.

Meanwhile, Oregon’s vaccine rollout continues to gain speed. Oregon Health Authority Director Patrick Allen said Friday the state is “on pace to administer first doses to all seniors by early April.” The vaccine requires two doses spaced several weeks apart. Next week, the state will start vaccinations for people 75 and older. This week, the state started vaccinating people 80 and older. By the week of March 1, seniors age 65 and up will be eligible.

“I know many of you were disappointed you couldn't get a vaccination appointment, but I want to let you know I stand by my promise you will get vaccinated,” Allen said.

So far, Oregon has administered nearly 650,000 doses, either first or second, to seniors, K-12 employees and early childhood workers, and the priority group 1a, which includes health care workers, staff and residents in long-term care facilities, people with disabilities and inmates. Hospitals, clinics and public health agencies have received 884,275 doses to administer.

By the end of this week, more than half a million Oregonians will have received first doses, unless the snowy weather forces postponements, Allen said.

The state’s rolling seven-day average is 17,341 doses per day.

Assuming an adequate supply from the federal government, Oregon will need to reach and maintain more than 25,000 doses a day to achieve community immunity before autumn, Allen said. Community immunity will be when 70-80% of the state’s population of 4.2 million is vaccinated, officials said. At that point, the virus may begin to recede as it fails to find enough hosts.

As part of the vaccination drive, the state will give predictable allocations to vaccination sites so they can plan appointments several weeks out, Allen said. Counties will get doses based on population and retail pharmacy distribution will be prioritized, Allen said.

More supplies are on the way. The federal retail pharmacy program is putting more doses into Oregon’s system, along with 6,000 doses to the state’s federally qualified health care centers, which provide primary care to under-served communities. The federal government will be counting six doses instead of five doses in each vial, which will help boost the state’s weekly allocation from 75,000 doses to more than 82,000. The amount of vaccine in the vials is unchanged, but officials have determined they were consistently able to get six injections worth of vaccine from each vial.

The federal retail pharmacy program has launched in the state. It encompasses 103 Safeway and Albertsons pharmacies, 13 Costco pharmacies and 11 Healthmart pharmacies. Each pharmacy has received about 100 doses to start.

Stephen Certo, director of pharmacy operations for Safeway and Albertson’s stores in Oregon and Southern Washington, on Friday said the company’s 103 pharmacies in Oregon have doses and an online scheduling tool that allows people to sign up. Certo said people can also call the pharmacy directly if they cannot access the scheduling tool.

The tool is at the corporate website. However, it does not show any appointments available yet in Oregon.

Mass Vaccination Sites Are Revving Up

Mass vaccination sites are another avenue. Wendy Watson, chief operating for Kaiser Permanente Northwest, said the mass vaccination work at the Oregon Convention Center has put more than 54,000 doses in arms during the last 18 days. That effort includes other major health care partners, including Oregon Health & Science University and Providence Health & Services. It’s administering about 4,000 doses daily and will step up to about 6,000 doses as health officials layer in second doses.

Administrators canceled the convention center vaccinations for Friday and Saturday due the weather and will reschedule those people into next week. Watson said they are doing direct outreach to those people with phone calls, emails and health account notifications.

Watson said that work will not lead to changed or canceled appointments for other people who already have appointments next week.

The Oregon Health Authority has online tools for people to get information -- https://covidvaccine.oregon.gov/ -- but seniors and others without Internet access must make phone calls.

They can call their public health department, pharmacy or 211, a health information line.

Dan Herman, chief executive officer of 211info, said his agency has received 30 members of the Oregon National Guard to help handle calls at the center. They arrived at the call center during the weekend and started Tuesday afternoon after training.

Overall, the COVID-19 picture is brightening in Oregon. Based on case count trends, the state shifted 12 of Oregon’s 36 counties this week from the worst level -- extreme risk -- to high risk, which allows restaurants to have limited indoor dining and fitness studios and indoor entertainment venues to expand capacity.

Sidelinger, the state epidemiologist, said cases and deaths have been trending downward since mid-November. Overall, nearly 2,100 people in Oregon have died of COVID-19 since the pandemic started and almost 150,000 people have tested positive.

“Make no mistake about it,” Sidelinger said. “The virus remains a threat to all of us.”

The U.K. variant -- which is more contagious and another source of concern -- is in Oregon.

Even as more people get vaccinated, Oregon’s path to full reopening remains long.

“Masks are not going away anytime soon,” Sidelinger said.

Many Residents Still Hesitant About Vaccine

Meanwhile, state officials recognize that the high demand for vaccines will taper off.

Allen said the state knows from its surveys that about 40% of residents definitely want the vaccine and another 40% are open to it but less certain.

“There is a point where we’re going to flip over from more people and not enough vaccine, to really needing to work hard to get into that 40%” who are hesitant about the vaccine, Allen said.

Key to achieving community immunity will be approval of a vaccine for children and youth, Allen said. The Pfizer vaccine is for people ages 16 and up; the Moderna vaccine is for ages 18 and up. Both companies are testing how well their vaccine works on young people.

Currently, national studies are underway to vaccinate children as young as 12 years old. Allen said it’s critical that younger children become eligible for vaccinations to help the state reach the threshold needed for community immunity. Otherwise, hitting the 70-80% mark for the overall population would require nearly universal buy-in from the adult population, he said. About 840,000 Oregonians, or 20% of the population, are under 18, according to the U.S. Census.

As vaccine supplies increase, Oregon has capacity to expand daily vaccinations. Allen said the state has had several days in which about 25,000 people were vaccinated.
“We’ve got ample capacity to reach that level” and beyond, Allen said.

The headline and the first part of the text regarding the vaccines is much too negative, and perpetuates unneccessary fear among people. As pointed out by Sheila Hamilton, @PDXBizJournal, a better headline would have been,  “Four vaccinated people get COVID-19 and barely notice.” The point is that the vaccines are nearly 100% effective against severe disease, even though 'only' 90-95% against symptomatic disease. That is what we should be emphasizing IMHO.