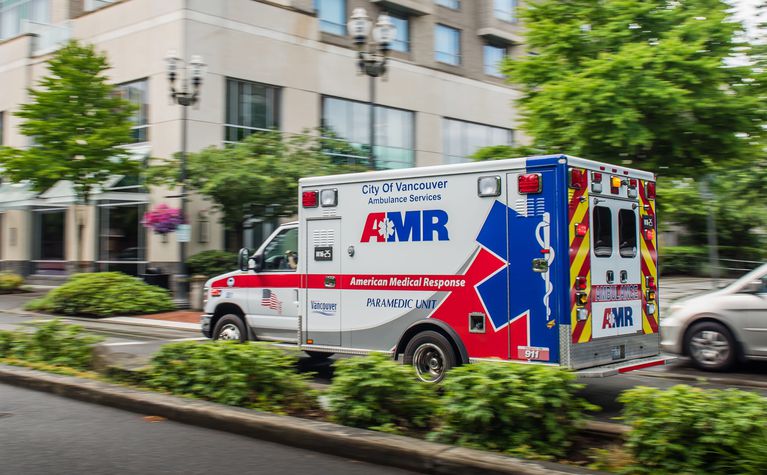 An ambulance drives through Vancouver, Washington in August./Courtesy of the City of Vancouver

Study analyzed tens of thousands of 911 calls to find disparities in how medics treat pain in patients of different races, genders and insurance coverage.

An Asian or Hispanic person calling 911 for emergency medical care in Vancouver is less likely than white peers to receive vital care, according to a new report commissioned by the city.

Medics are less likely to assess their pain, the report found, and less likely to take measures to reduce that pain, such as drugs, oxygen or an IV drip.

Almost all cases studied involved patients whose pain required a trip to the hospital, said Vancouver Fire Chief Joe Molina. He said a pain assessment can be the difference between life and death.

“Ultimately that affects the care and that ultimately can affect the outcome,” he said. “Literally, and I don’t do it for drama, but it can literally lead to people not surviving the emergency.

“When I got the report, believe me, I was very troubled by it,” Molina said.

The report, released Monday, was conducted by Portland-based Healthcare Equity Group. The organization studied 18,000 times patients called 911 for pain between 2015 and 2019, and another 5,100 times a patient called specifically about chest pain — potentially for a heart attack.

Then, Healthcare Equity Group analyzed the data to discover any disparities for patients of color when compared with white patients.

Disparities appeared based on patients’ insurance type, as well. Medicare and Medicaid patients, who are more likely to be elderly or low-income, were less likely to get assessed and treated than patients with private insurance.

Deciding when to assess pain is more often left to a medic’s judgment than other protocols in the field, Molina said, and that makes room for unconscious bias.

“We’re all products of our upbringing in our society, we can’t help but have biases,” he said. “And, based on the report, I have to believe we’re not treating everybody equitably.”

Medics have less wiggle room when someone calls 911 for chest pain, but disparities appeared there, too.

Patients described as Asian or “other” were 58% and 46% less likely, respectively, to have their chest pain assessed than white patients. “Other” race patients and female patients, too, were less likely to undergo heart tests.

Molina said he was surprised by the findings because calls for cardiac chest pain are more regimented.

“The belief that we have a protocol and we write it very strict — so we can control for bias — doesn’t appear to be correct,” he said.

Jamie Kennel, co-founder of Healthcare Equity Group, said the study focused on responses, instead of outcomes, in part to control for socioeconomic factors.

For example, a person living in a wealthier neighborhood may be likelier to have a positive outcome for cardiac chest pain because they have had better access to nutrition in recent years or have a neighbor with defibrillators.

“If we only look at outcomes, it’s easy to confuse and misinterpret that the care the patient was provided led to that outcome,” Kennel said. “The question is, When someone calls for pain, do we treat them the same?”

Disparities in how doctors in emergency rooms treat different races has long been documented, Kennel noted, but only recently have practices of paramedics and EMTs been put under a similar microscope. Last year, he led a similar study showing black patients in Oregon were 40% less likely to get pain medication than white peers.

Kennel, who is also head of emergency medical services programs at Oregon Health and Science University and the Oregon Institute of Technology, said the findings point to a systemic issue.

“It’s not that paramedics or EMTs are broken,” he said. “It’s that they are human.”

The findings come as communities across the country, including Clark County, are grappling with the concept of systemic racism.

Ed Hamilton Rosales, president of the Southwest Washington branch of the League of United Latin American Citizens, said the report puts the problem in sharp relief.

“This is what systemic racism looks like. It’s not about a person, it’s about a process,” he said. “How you hire staff, and mobilize, can affect a person’s life because of that.”

Rosales, himself a former paramedic, said non-native English speakers are less likely to call 911 because even if they know some English, a person may not be able to speak it as well during a crisis.

“I feel just as bad as paramedics out in the field,” Rosales said. “These people may not trust them, and they may not speak the same language.”

Vancouver commissioned the report in 2019, paying Healthcare Equity Group $48,000, according to a city spokesperson. Molina said ordering the report was due to a “confluence” of factors, including staff interested in doing such a study and the city government examining its own inclusiveness.

In Vancouver, medical emergencies are answered both by the fire department and a contractor, American Medical Response, Inc.

Both organizations are overwhelmingly white and male, Molina said. The Vancouver Fire Department has 176 staff — five of whom are Black and seven are women. Molina told OPB this latest report highlighted shortfalls that need to be fixed.

“There’s a whole segment of the community that’s probably not even calling us, and just going to the hospital, because they feel that’s a better option than getting the care in the field we provide,” he said.

This story was first published by Oregon Public Broadcasting and is posted here through a Northwest media content-sharing agreement.