Urban Hospitals In Oregon Lose Hundreds Of Employees Over Mandate 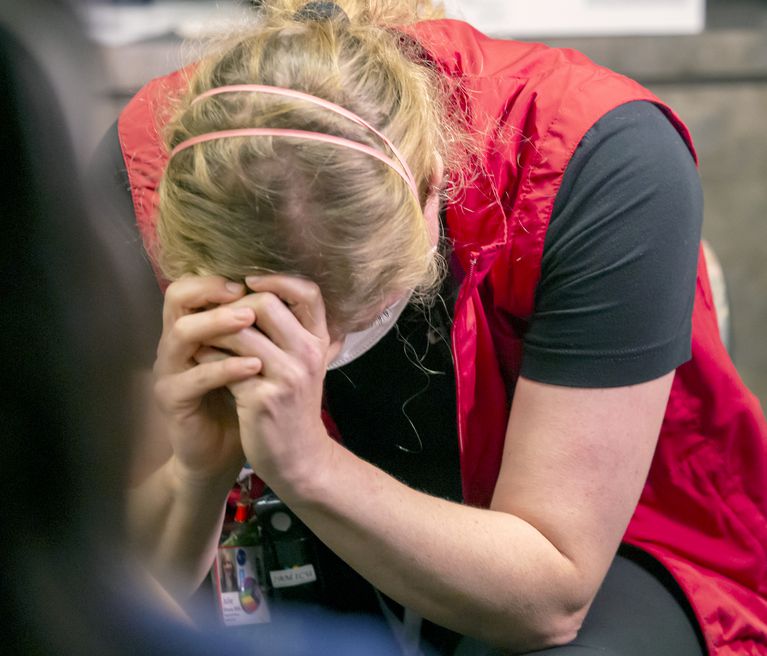 Julie Kleese, RN, cries after sharing her experiences as an ICU nurse at OHSU Hospital./Hanin Najjar/OPB

Oregon’s urban hospitals have lost hundreds of employees and some have consolidated services over the state’s vaccine mandate but they’re continuing to admit patients, perform necessary surgeries and conduct lab tests, they reported on Monday.

Rural hospitals, which play a bigger role in their communities, have dealt with the mandate by largely accepting claims from employees that they should be exempt for religious or medical grounds.

Though some patients might face longer wait times during a busy day in an emergency room or for a non-urgent procedure, the impact of the mandate is likely to be invisible for most patients, health experts predicted.

The Oregon Health Authority said in an email that it is “not seeing evidence there will be a large number of vacancies in health care staffing” after Monday’s deadline.

“We are hearing from health care partners that the number of vaccinated health care workers continues to rise with many health care systems reporting more than 90% of their staff vaccinated,” a spokeswoman said in a statement. “That said, we don’t yet know the full impact of the vaccination requirement on the state’s health care workforce, and won’t for at least the next several days to a week.”

The agency has asked employers to give staff flexibility in getting vaccinated or requesting an exemption.

“Staff can be asked to work remotely, take vacation time or unpaid leave until they have met the vaccination requirement. We also encourage employers to keep at it, and encourage their employees to complete vaccination,” an agency spokeswoman said.

Monday’s mandate, which applies to health care staff, school employees and volunteers and state employees, was declaredin August to curtail the surge of the Delta variant which sparked the biggest spike in hospitalizations and death since the pandemic began.

The mandate prodded many health care workers to get inoculated with the Pfizer, Moderna or Johnson & Johnson vaccines.

“The vaccination requirement worked,” Legacy Health said in a statement.

At Oregon Health & Science University, more than 450 people are being laid off or are on unpaid leave while the institution reviews their exemption requests. About 7% of staff at Providence Health & Services, the largest health care system in Oregon, were still not compliant on Monday and St. Charles Health System, based in Bend, reported it has lost 180 employees, with most of them resigning last week.

Kaiser Permanente had already adjusted to the mandate by Monday, while Santiam Hospital and Clinics, which employs about 550 people in Stayton, reported a vaccination rate of nearly 85%.

“About 20 hospital employees have chosen unpaid leave, termination or early retirement rather than get vaccinated,” said Lauren Benjamin, the hospital’s spokeswoman. “We have not had to consolidate or postpone our services.”

Providence, based in Portland with 23,000 employees, echoed that message.

“We are confident that we will be able to minimize any potential impacts on our patients and their families,” said Gary Walker, a Providence spokesman.

Hundreds of employees on leave

Asante, with three hospitals in southern Oregon, has lost dozens of employees among a staff of 6,100, and Legacy Health, with more than 13,000 employees, has nearly 600 on unpaid leave.

The state health authority left health care companies with the responsibility for approving medical or religious exemption claims. Some companies were more generous than others in their approvals.

The Oregon Nurses Association complained about religious rejections at Legacy Silverton Medical Center, the only Legacy hospital where it has members. The company acknowledged that “the denials were upsetting for some employees.”

There appears to be less controversy in rural areas, however, where hospitals cannot afford to lose even a single employee.

“We’re not just a hospital,” Charlie Tveit, CEO of Lake Health District, told the Capital Chronicle. “We are responsible for the county public health, county mental health. We have a couple of long-term care and assisted living (facilities). We provide the EMS service for our area now. So we do a lot of things other than just a hospital.”

The district, based in Lakeview near the border of Nevada, has 400 employees and volunteers, and only about 60% are fully vaccinated. Almost all of the rest have been approved for their exemptions claims, Tveit said.

“As of an hour ago, we had less than 1% who are undecided,” Tveit said Monday afternoon. “For some people, they either couldn’t make up their mind as to (whether) they should get vaccinated. But the date helped solidify that for those who elected to get an exemption.”

Only 1% of his workforce had not been inoculated or requested an exemption by late Monday. Tveit said he hopes he won’t lose anyone.

“The workforce is critical in rural settings,” Tveit said. “We’re fortunate if we can get people to work for us, and it’s hard to recruit if somebody leaves. So we’ve elected to keep everyone safe and accept their exemptions. We’re not in a position to challenge somebody’s medical reason or their religious beliefs.”

Although unvaccinated health care employees are not supposed to be involved in patient services after Monday, Tveit said the health care district will carry on as before, with health care staff masking, sanitizing surfaces and wearing appropriate protective gear.

Less than 40% of the population in the county – only about 8,000 people – is inoculated but only 11 people have died from Covid-19, the fourth lowest number in Oregon after Gilliam, Sherman and Wheeler counties.

“I think we have done a really good job in Lake County,” Tveit said. “We don’t have a high incidence of hospitalization in our county … and we haven’t had employees getting sick from exposure while at our health and our facilities.”

He said that other rural hospitals, even in counties with a much higher number of cases and fatalities, are also approving all exemptions.

Good Shepherd Health Care System in Hermiston, in a county with nearly 145 deaths, more than 14,000 Covid-19 cases and an overall vaccination rate of 50%, said last week it would meet the mandate. It did so, said Caitlin Cozad, who oversees hospital’s communications and marketing.

“Good Shepherd is fully compliant with the state mandate and fully operational,” she told the Capital Chronicle in an email.

An official at Blue Mountain Hospital District, which includes a hospital in John Day, said the facility has seen a “significant increase” in vaccinations leading up to the mandate. The hospital has created an internal pool of cross-trained employees to give it greater flexibility and has asked the state for staffing help to fill any gaps.

“Our patients should expect to continue to receive safe, high quality care without disruption when they come to any of Blue Mountain Hospital District’s facilities,” said Var Rigby, director of human resources at the district.

She said unvaccinated staff with an exemption will be required to undergo regular Covid-19 tests. The few people who are not inoculated or who have not submitted an exemption request will have until Jan. 31 to become compliant.

Wood said patients can choose to be treated only by vaccinated staff.

“Salem Health does not anticipate any disruption in patient care as a result of the vaccine mandate deadline. As we have throughout the pandemic, we have contingency plans in place to meet staffing needs and continue serving the community.”

Susan Mills, a spokeswoman with the Oregon Health Authority, said the state has not received any reports of problems among paramedics and emergency medical technicians. “As of now, no EMT or paramedic shortages have been reported as a result of the vaccine,” Mills said.

Officials in some rural areas had warned that ambulance services would be severely impacted by the mandate. But that is not the case in Jefferson County, where just over 50% of residents are vaccinated. The county has 42 paramedics and other emergency staff and volunteers.

Only two are being laid off and they’re both inactive anyway, said Michael Lepin, chief of the Jefferson County EMS District.

“The vaccine mandate has not (and) will not interrupt our operations,” he wrote in an email. “I have not heard from other agencies, only rumors and speculation. The agencies closest to me, I know, are still in operation.”

Another sector affected by the mandate – long-term care services – also appears to be in good shape.

“There are no reports that the vaccine mandate is affecting services to residents in long-term care facilities,” Lisa Morawski, communications director for the Oregon Department of Human Services, told the Capital Chronicle in an email.

“We have not heard of facilities postponing admissions, although that would be one tool they could use if they are unable to maintain their current capacity,” Morawski said.

The department has been working for months to ensure that those with developmental disabilities see no disruptions, including hiring 110 temporary workers to staff a crisis and stabilization unit.

The Oregon Health Authority has spent more than $133 million for hundreds of temporary health care workers for hospitals and other facilities. Asante, which has 700 open positions, has 400 contract staff, including about 150 through a state contract. National Guard troops are helping out as well, as they are at St. Charles Health System, which has 940 open positions but is in the process of hiring 200. The health care system has benefited from OHA contract staff, with about 120 spread among its four central Oregon hospitals.

Dr. Jeff Absalon, executive vice president and chief physician executive at St. Charles, said the system is stabilized now, but he’s concerned about later in November when the state contracts run out and the military help leaves.

“We’re anticipating that there may be some adjustments come the latter part of November,” Absalon said during a news conference on Monday. “We’re very fortunate to have the National Guard and our contracted workers here for some time in front of us, but we’re still working on understanding what we will need to pivot to or whether there may be some service impacts as a result of our staffing challenges.”

The current crunch comes amid a health care workforce shortage around the state and across the country. Companies have offered sometimes thousands of dollars in retention bonuses to attract staff. Others have raised rates.

These are unprecedented times,” Absalon said. “The challenges faced by our workforce gaps and challenges both for us as well as health systems across the country are significant now to a degree that I’ve never seen before.”

CORRECTION: An earlier version of this article misstated the number of Legacy Health employees.