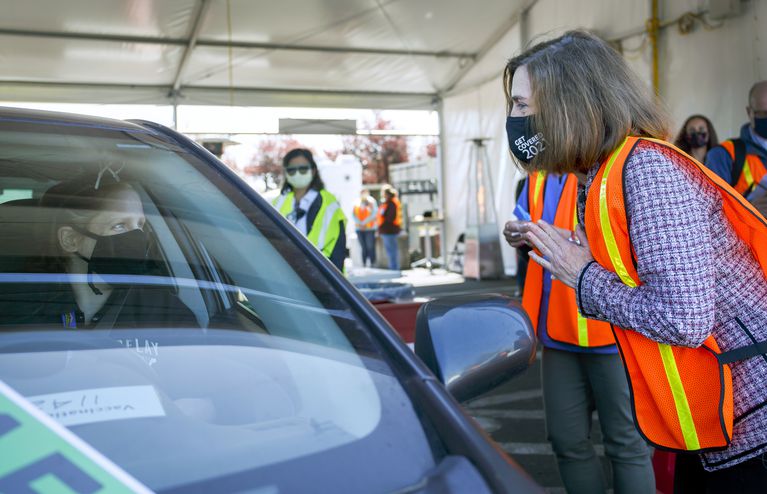 Two of Oregon’s most influential unions have bargained with the state to allow employees of the state executive branch more time to comply with Gov. Kate Brown’s mandate, which requires them to be vaccinated by Oct. 18 or risk losing their job.

According to Liz Merah, press secretary for Brown, the governor has agreed to a process which will allow employees represented by SEIU Local 503 and AFSCME Council 75 who have received at least one dose of COVID-19 vaccine by Oct. 18 to complete their immunization by Nov. 30.

The agreements with two of the state’s largest public employee unions will provide an extra six weeks for just over 26,800 workers to comply with the mandate.

“This is a more productive path than someone not getting vaccinated at all and leaving state service,” Merah said in an email Wednesday.

An addendum to the statewide policy issued Oct. 1 will give the same grace period to an additional 7,156 state employees who are unrepresented by a union or are considered management and executive service.

That means a majority of the approximately 43,000 state workers who fall under Brown’s mandate will be granted more time to complete their vaccination requirement. In the meantime, those who aren’t fully inoculated will be allowed to work remotely or use paid leave time as a stopgap while they get vaccinated.

According to Ben Morris, communications director for SEIU Local 503, the union’s intent through this bargaining process was to ensure the state listened to the concerns of frontline workers who feel that, until now, they haven’t been a part of the conversation.

“One of our biggest issues going into negotiations was making sure there was a clear process in place for people who were not fully vaccinated by Oct. 18, those who are most impacted by this mandate,” Morris told OPB. “The goal of this mandate was to get as many people vaccinated as possible. The grace period encourages that because people can start the process at the last minute.”

Morris said that state employees represented by SEIU — which includes workers within divisions such as the Department of Human Services, Department of Transportation, Department of Justice and State Parks, among others — have varying opinions on and degrees of comfort with the vaccine.

According to Morris, SEIU leadership has fielded concern regarding side effects of receiving the shot, a lack of fear over getting the virus and even the spread of misinformation as reasons for hesitancy.

“State employees as a group aren’t any different than the general population when it comes to their views about the vaccine,” he said.

Morris also said that workers are extremely busy in balancing both their personal and professional lives. Many have families they’re caring for while also trying to serve the state the best they can, causing delays in their ability to receive the shots.

Part of the agreement between the unions and the state will provide employees with paid leave to take the vaccine and recover from any side effects, a major barrier that the unions hoped to clear in negotiations.

“I think it’s really important to note that when employers listen to their workers and negotiate with them over these kinds of things, you get a better outcome,” Morris said. “We’re going to see more state workers get vaccinated, and we are going to see a smoother process in terms of the functioning of state services as a result of this agreement.”

According to Morris, his organization is also advocating for employers to meet staff where they’re at by providing opportunities to be vaccinated in the workplace when that makes sense, such as people who work in hospital settings.

That advocacy is part of a larger communication effort to members focused on education, as well as providing a forum through which questions and concerns can be shared with management and addressed. The union continues to communicate using text messages, virtual town halls, worksite meetings and regular email updates to connect with members.

AFSCME Council 75 Executive Director Stacy Chamberlain confirmed Wednesday that her organization is also currently engaged in a robust messaging initiative to notify members of what their options are moving past Oct. 18.

Chamberlain’s organization represents a variety of state employees across departments such as the State Fire Marshal’s Office, Oregon Liquor Control Commission, Office of Emergency Management, Department of Environmental Quality and others.

Public safety employees within the state’s Department of Corrections are also represented by AFSCME, but were excluded from the agreement the union just negotiated with the state.

Separate negotiations for those employees are ongoing, as well as for unions representing police officers, firefighters, pharmacists, nurses and others employed by the state of Oregon.

AFSCME leadership has even made use of its internal connections among members who are physicians or other medical professionals who have volunteered to speak with unvaccinated members to answer their questions.

The idea is to provide resources for those members who remain curious about the manufacturing process and potential impacts of the shot or who want more information as they decide whether to receive the vaccine.

“Trying to find a trusted messenger was really important to us,” Chamberlain said.

Despite those efforts, many employees have remained adamant in their opposition to receiving the vaccine.

In some cases, that reluctance toward the vaccine is teeing up potential chaos for state workers who have chosen to get vaccinated, but potentially face even longer hours as they fill in the gaps that will be left by co-workers impacted by Brown’s mandate.

Christina Sydenstricker-Brown is a AFSCME member who serves as a direct support crisis specialist with the Oregon Department of Human Services’ Stabilization and Crisis Unit (SACU).

She works at a SACU group home near Salem where she provides care to adults with intellectual and developmental disabilities; in some cases, her clients are also dealing with mental health issues.

Sydenstricker-Brown said she received her vaccination back in January when it was made available to her as a frontline healthcare worker. Although she made the decision to protect herself and her family from coronavirus by getting vaccinated, she believes it’s a personal choice, and respects her co-workers who have decided not to take the shots.

She said that staffing shortages have been a problem for the state’s SACU facilities throughout the pandemic. But now that the deadline for the governor’s mandate is imminent, the situation is about to get much worse.

At her facility, workers who are unvaccinated will only be able to take accrued paid time off while they complete their vaccination since the work they do can’t be completed remotely.

“For a lot of our (union members) to get vaccinated has caused a headache because they feel they have to in order to keep their job,” she said. “A lot of them are trying to meet that Oct. 18 deadline but still have one more shot, or it hasn’t been two full weeks and the state isn’t going to recognize them as being vaccinated.”

Sydenstricker-Brown said that she understands the governor’s Oct. 18 deadline provides motivation for people to actually take steps to get their vaccination, but she questions why the state wouldn’t just allow those who are in the process of getting their shots to continue work given that they’ve already been working in close quarters throughout the pandemic.

“They’re tired,” she said. “So it’s really hard for them to get in to get that taken care of. And then to be feeling that they’re forced to do it on top of it isn’t a good feeling.”

Sydenstricker-Brown said she’s happy to see her union fighting so hard to provide an extended timeline for members to comply with the mandate instead of losing their jobs, but she feels the state could do more to incentivize those who are reluctant.

She said she wishes the state would implement some sort of bonus system for those who have been working tirelessly on the front lines of the pandemic since it began as some hospital systems have done.