With prescription drug prices soaring and President Donald Trump vowing to take action, an old idea is gaining fresh traction: allowing Americans to buy medicines from foreign pharmacies at far lower prices. A new bill in Congress to allow the practice would modify previous safety standards and remove a barrier that proved insurmountable in past attempts to enable progress.

Congress came close to allowing importation through the Medicare Modernization Act in 2003, but added one firm precondition that has proved a nonstarter. The secretary of Health and Human Services had to guarantee that imported medications posed no additional risk to public safety and would save money.

“That is a fairly absolute standard and a high bar to cross,” said Elizabeth Jungman, director of public health at the Pew Charitable Trusts. Such an exacting standard — guaranteeing that no imported prescriptions posed a threat — has kept any secretary of HHS from condoning it.

In an open letter to Congress, four former commissioners of the Food and Drug Administration argue consumer drug importation remains too risky to permit. “It could lead to a host of unintended consequences and undesirable effects, including serious harm stemming from the use of adulterated, substandard, or counterfeit drugs,” they said in the letter distributed to media organizations. It was signed by Robert Califf, Margaret Hamburg, Mark McClellan and Andrew von Eschenbach, who headed the FDA at various times between 2002 through 2016.

The recent proposal, from Sen. Bernie Sanders (I-Vt.) and such Democrats as Cory Booker from New Jersey and Bob Casey from Pennsylvania, drops that requirement. Instead, it sets up a regulatory system where Canadian pharmacies who purchase their supply from manufacturers inspected by the Food and Drug Administration would be licensed to sell to customers across the border. The bill allows not only individuals but drug wholesalers and pharmacies to buy from Canada.

After two years, HHS could allow importation from other countries that meet standards comparable to those of the U.S.

(Another bill in Congress, proposed in January by John McCain (R-Ariz.) and Amy Klobuchar (D-Minn.) focuses solely on allowing individuals to purchase from such pharmacies.)

Trump has promised that “pricing for the American people will come way down.” Last week, he had a high-profile meeting at the White House with Elijah Cummings, Peter Welch (D-Vt.) and the head of Johns Hopkins Hospital, Redonda Miller, to discuss allowing Medicare to negotiate prices on outpatient medicines. Cummings told reporters later that Trump said he supports Medicare price negotiation as well as the Sanders bill.

PhRMA, the drug industry’s trade group, has denounced Sanders’ proposal as it has others that enabled imports in the past.

“The bill lacks sufficient safety controls [and] would exacerbate threats to public health from counterfeit, adulterated or diverted medicines, and increase the burden on law enforcement to prevent unregulated medicines and other dangerous products from harming consumers,” said PhRMA spokeswoman Nicole Longo.

Surveys indicate that up to 8 percent of Americans have bought medicines outside the U.S. even though the practice is technically illegal and imported pills are subject to confiscation.

Around 45 million Americans — 18 percent of the adult population — said last year they did not fill a prescription due to cost, according to an analysis of data from the Commonwealth Fund by Gabriel Levitt, president of PharmacyChecker.com, whose company helps Americans buy medications online by vetting overseas pharmacies and comparing prices for different drugs. Data compiled by the company comparing prices offered in Canada to those in New York, shows drugs are frequently three times or more as costly in the U.S. as over the border. 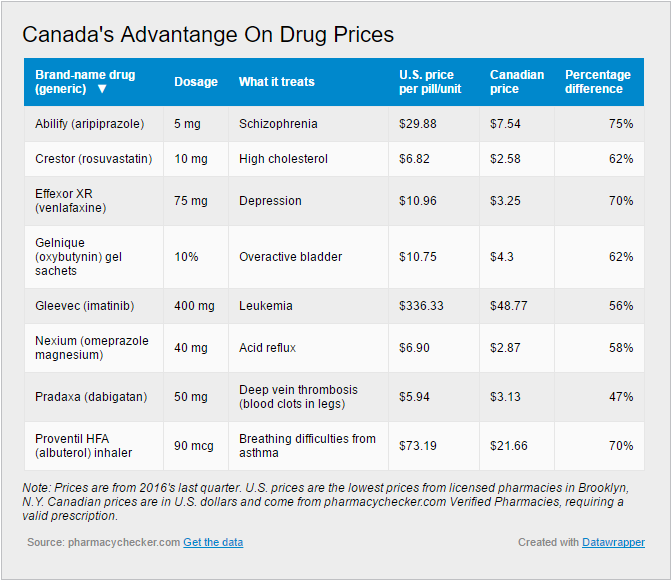 Many previous bills to allow importation or to allow Medicare to negotiate prices for its beneficiaries have failed in the face of $1.9 billion in congressional lobbying by the pharmaceutical industry since 2003, according to Open Secrets. But Americans may be reaching a tipping point of intolerance. In polling just before the election by the Kaiser Family Foundation, 77 percent of Americans called drug prices “unreasonable” and well over half favored a variety of proposals to address them.

To address safety concerns, the Sanders bill institutes several new strategies. Canadian pharmacies that want to be registered to sell to Americans would have to pay a fee to pay for additional FDA monitoring. A General Accountability Office study would be required within 18 months of the final rule to address outcomes related to importation processes, drug safety, consumer savings and regulatory expenses.

Allowing people to legally import medications wouldn’t totally solve the problem of high prescription drugs, advocates say, but would be a step in the right direction. Said Levitt: “The best way for Americans to afford their meds is to enact polices here to bring the prices down here.”