American Indian and state leaders signed a contract last week to work through details of qualifications and outreach
By:
Raymond Rendleman 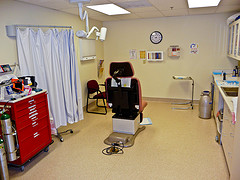 March 2, 2012 -- It’s been a busy month in Oregon’s world of health policy, but perhaps nowhere more so than the intersection between tribal health issues and the health insurance exchange.

Even though the financial future of the Oregon Health Insurance Exchange suffered a setback by going back to committee during this short legislative session, both tribal and exchange leaders expect nothing will change in terms of the guaranteed insurance funding and basic administrative structure.

In the Consolidated Appropriations Act of 2012, President Obama signed a final $237.3 million increase in the budget for Indian Health Services, which represented a 5.8 percent hike to the $4.3 billion total budget. Oregon’s exchange planning grant from the Center for Consumer Information and Insurance Oversight provided a maximum $100,000 contract that the exchange signed last week with the Northwest Portland Area Indian Health Board for research to determine tribal-specific eligibility needs.

Under the terms of the contract, they will continue to address issues specific to American Indian/Alaska Native participants under the Affordable Care Act. They’ll also be looking into ways that the exchange could permit tribes, tribal organizations and urban Indian organizations to pay premiums on federally-certified health plans.

The insurance exchange has heard testimony about health implementation concerns from tribal leaders such as Bob Garcia, chairman of the confederated tribes of Coos, Lower Umpqua and Sisulaw Indians, and Michael Watkins, chief operations officer of the Native American Rehabilitation Association of the Northwest.

For a variety of reasons, the nine federally recognized tribes in Oregon generally are not financed adequately to provide a full range of healthcare. Under signed agreements, the federal government has an obligation to provide health services, and these healthcare programs will be impacted by the exchange.

Overall, Garcia “was very pleased with the meeting” because he thought that the exchange staff understood tribal concerns, but said there are still a lot of kinks that need to be worked out.

“The health exchange could be an additional mechanism for disenfranchised tribes to get the healthcare they need,” he said. “The major question I have is whether as a tribe, are we going to be dealing with one health exchange or 50 of them?”

Jim Roberts, policy analyst with the Northwest Portland Area Indian Health Board, said “the devil’s all in the details in terms how these things work out.” Recognizing the importance of the minutia, he and other leaders formed a Tribal Technical Work group, consisting of experts on the Tribal Health System and exchange staff who held their first monthly meeting February 9.

Now Roberts feels optimistic that “things are well under way” to ensuring healthcare access to native populations. “It’s a positive first step in the process, and it shows a willingness on the part of staff to work with tribes,” he said.

This new process for tribal health was set in motion during last year’s legislative session when lawmakers passed Senate Bill 99, establishing the Oregon Health Insurance Exchange Corporation. This month the exchange began presenting a business plan for lawmakers to review and approve.

During the next 18 months, the exchange plans to focus on developing its technology system, working with stakeholders on designing exchange operations, and providing education and outreach around the state.

There are a number of Indian-specific issues the exchange will need to address. For native populations, there’s a legal obligation to address health disparities under the terms of the Federal Trust Relationship. In another special legal arrangement, American Indians are exempt from the individual mandate, which is the only ethnic group that has such an exemption.

Roberts is particularly concerned about the definition of who qualifies as an Indian for special health insurance. State and federal agencies ended up with different definitions for who is eligible, Roberts noted, but the enrollees in the health plan should be eligible for a subsidy, and the tribal clinics should also be able to bill the insurance exchange.

“We shouldn’t get caught up in this, and anyone who checks the box on the form should be enough for documentation,” he said.

Addressing outreach and enrollment issues for American Indian people is also a work-in-progress.

“Indians are very cautious about going online and calling the government, for obvious historical reasons, so I’m working with the exchange to develop Indian expertise in the call center,” he said.

Under the terms of last week’s contract, the exchange will help tribes research the most effective manner to establish a tribal call center assistance and assess the telephone and cell-phone service capacity of Indian reservations and Oregon Indians residing in urban areas.

Tribal concerns have been heard this month all the way up to the Oregon Health Policy Board as to how coordinated care organizations should interface with the insurance system. Tribal leaders say they took this extra step to address statutory and regulatory requirements as they apply specifically to American Indians on Medicaid.

Lisa Morawski, spokesperson for the insurance exchange, noted that the group has been working closely with Roberts and other tribal leaders on the draft policy to ensure it can provide benefits and protections provided to American Indians and Alaskan Natives by the Affordable Care Act.

“We feel like we are making good progress, and both the exchange and the tribes are equally committed to making this project work,” she said. “The input we have received thus far from the tribes has been extremely helpful to the exchange in understanding the unique health insurance needs of the tribes and the work that is necessary to ensure the tribes receive the benefits and protections spelled out in the ACA.”

In the past several months, the exchange has been working to establish relationships with the tribal communities and to develop a framework for receiving “meaningful input” from the tribes on policy decisions that will affect them. In January, Executive Director Rocky King and other exchange staffers met with about 20 tribal representatives and the Native American Rehabilitation Association to receive input on the policy. They’re currently working on a consultation policy that formally lays out how the exchange will interact with the tribes.

“We do not anticipate any changes that will affect the tribes,” Morawski said. “The Exchange Business Plan has wide support from consumer groups and the business community.”