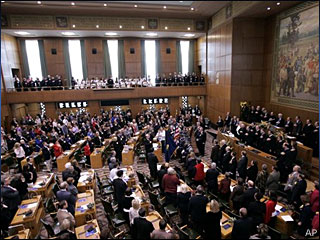 The House of Representatives voted 44 to15 to approve Medicaid taxes expected to raise an additional $98 million from hospitals and $410 million from insurance plans to help cover the Medicaid gap.

The vote sends the legislation to the Senate for consideration, marking the first victory for Gov. Kate Brown’s plan to fund The Oregon Health Plan.

“This is something we should be very proud of,” Rep. Rob Nosse, D-Portland, said.

Brown also proposed raising the state’s tobacco tax by $2 per pack to raise an additional $95 million, taxing employers with employees on Medicaid to raise $120 million, and contributing $125 million from the state’s general fund.

In January, she asked legislators to prioritize funding the Oregon Health Plan within the first few weeks of the session.

Republicans urged lawmakers to vote against the proposal, saying it doesn’t go far enough in securing money. Rep. Cedric Hayden, R-Roseburg, noted that a $500 million shortfall remains. He said relying on these taxes could leave the state’s Medicaid program vulnerable in a recession.

“It does not give us the broad base funding that we need,” Hayden said. “We have four months. Let’s get this right.”

The 15 no votes came from Republican lawmakers who complained that the Legislature was moving too fast and that Republicans were left out of the process. The Democrats hold a three-fifths supermajority in both chambers this year enabling them to raise taxes without Republican support.

Sen. Mike McClane, R- Powell Butte, said he voted no because of the process and the hit to small businesses.

Rep. Denyc Boles, R-Salem, voted in favor of the bill, but complained that House Health Committee Chair Mitch Greenlick, D-Portland, did not allow a proper introduction of the amendments by legislative counsel until after committee members had voted on it.

“Telling minority voices to go along to get along asks me to abandon political duty for the sake of expediency,” Boles said.

However, Nosse argued that expediency is important and that exempting schools and small businesses from paying the tax could call for increased scrutiny from the Centers for Medicare & Medicaid because it could be noncompliant with the Affordable Care Act.

Finding a way to cover at least a portion of the shortfall provides some relief, Nosse told The Lund Report.

“Now I don’t have to think so hard about whacking people off the Oregon Health Plan,” he said.

The bill will go to the Senate floor next for a vote. If it passes there, it will move to Brown’s desk for a likely signature.