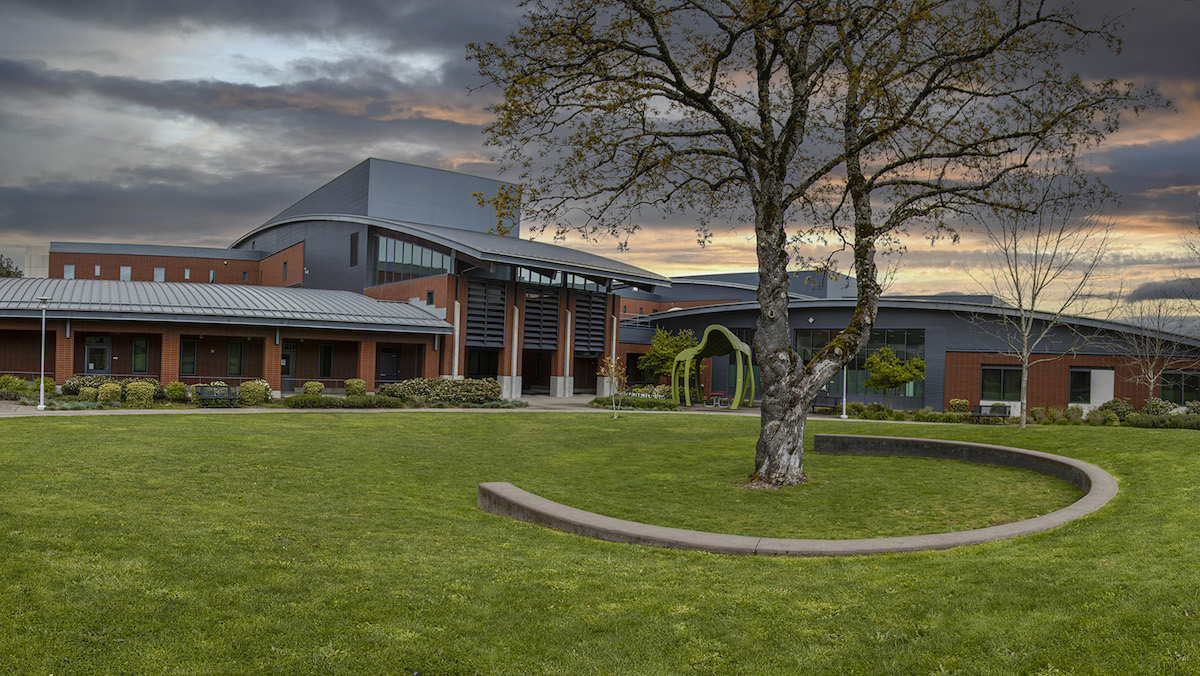 The west plaza at Oregon State Hospital in Salem./Courtesy of Oregon Health Authority

Dianne Davidoff, who filed the suit in federal court, shot and killed her son in 2015, and was found guilty except for insanity two years later. She was placed under the jurisdiction of the Oregon Psychiatric Review Board, sent to Oregon State Hospital’s Salem campus and then moved to the hospital’s Junction City facility, according to the suit. She was released to a residential treatment center in 2020.

The lawsuit claims David Herne, a registered psychiatric nurse manager at the hospital, groomed her for a sexual relationship using personal details from her confidential psychatric and medical files.

“Part of his method was to point to a confidential fact in her file and make Ms. Davidoff feel guilty for it,” the lawsuit said. “His barrage of advances and aggressions caused Ms. Davidoff great anxiety and stress and undermined her recovery.”

Herne couldn’t be reached for comment. His cell number listed in employment records is no longer in service, as is another phone number listed in Texas, the state he worked prior to Oregon. He has no attorney listed in court records.

State payroll records show Herne left state employment on May 1, after a seven-year career as a nurse at the state hospital. When he left, he was earning a monthly salary of about $12,000, state records show.

He has no record of discipline by the Oregon State Board of Nursing or its equivalent in Texas, where he previously worked.

However, the lawsuit claims state hospital higher-ups, including superintendent Dolores Matteucci, knew Herne had previously been disciplined for sexual harassment yet permitted him to interact with the patient.

The suit includes several images of text messages allegedly sent by Herne. It claims he gave Davidoff a cell phone, which was contraband in her unit.

In one, Herne allegedly texted: “I do chicks who are locked up and have the attitude that they’re gonna have as much fun as they can in spite of the constraints they’re under.”

Earlier, the suit said, a different nurse allegedly botched a skin tag removal procedure, and staff warned her that if she filed a complaint, it would make it difficult for her to transfer to a less restrictive setting. Davidoff claimed this affected how she responded to the nurse’s advances.

“Knowing that the nurse manager had sway over the course of her treatment including her potential release, she felt she had no option but to go along with his advances,” the lawsuit said.

The state hasn’t yet responded to the allegations in the lawsuit in court, other than to request a 21-day extension until Sept. 2. The attorney for the department, which represents the health authority and state hospital, said more time is needed, including for “potential investigation.”

The nurse’s alleged grooming included in-person visits that lasted for hours as well as the text messages, the lawsuit said. It claimed he squeezed the patient’s thigh and intentionally brushed up against her clothed breasts.

“Herne told Ms. Davidoff multiple times that he was attracted to her,

commented on her body, shared stories about prohibited relationships he had with other patients, and told Ms. Davidoff about his sex life,” the lawsuit said.

In another text, Herne allegedly admitted he could lose his nursing license over the situation.

He also used his cell to show her pornography and lingerie, according to the suit.

In December 2020, Davidoff was transferred to a secure residential treatment facility in Bend.Even then, the lawsuit said, Herne continued to call and text her for months.

“I long to touch you in explicitly sexual ways!” said one text message included in the suit. “I desire you!”

The suit claims Herne sent her two dozen roses on Valentine’s Day in 2021.

Davidoff became concerned after learning Herne allegedly shared medical information about her with other patients and staff, the suit said. When she confronted Herne, he told her to delete their texts and started calling her repeatedly, even after she asked him not to, the lawsuit said.

In May 2021, Herne allegedly left her a voicemail saying “I love you.”

Aug 18 2022
News source:
The Lund Report
Keywords:
oregon state hospital, oregon state nursing board of nursing
×
This article is for premium subscribers. If you are one, please sign in below.
You can see two more premium stories for free. To subscribe, click here. We depend on premium subscriptions to survive, and they are tax deductible.
Sign InGo Premium Not now