Next year’s premiums for health coverage under the Affordable Care Act could rise more than in past years in most markets and declines might be rare, according to a preliminary analysis of insurers’ plans.

Overall, premiums for a popular type of plan — the second-lowest silver plan — could rise 10 percent on average next year in 14 major metropolitan areas, according to an analysis released Wednesday by the Kaiser Family Foundation. Kaiser based its projections on insurers’ preliminary rates filed with state regulators, which remain subject to state or federal review. (KHN is an editorially independent program of the foundation.)

But in Providence, Rhode Island, consumers might see rates drop by 14 percent.

The report’s authors also suggested comparison shopping could help consumers beat rate hikes, but they might have to switch insurers — and potentially their doctors — to avoid a big increase. Open enrollment begins Nov. 1. 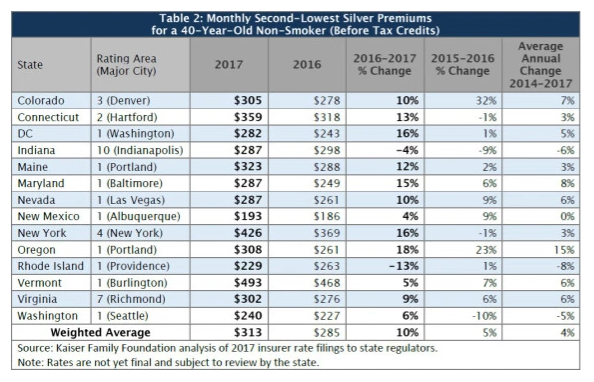 As insurers’ plans firm in coming months, the future of Obamacare premiums could be a topic of intensifying debate between the two major presidential candidates and those in other contested political races.

More than eight in 10 marketplace enrollees won’t be directly affected by increases in premiums because they receive a government subsidy that will insulate them.

It’s still too early to tell whether Kaiser’s projections will reflect the national trend because data is only available for a quarter of all states and none yet for big ones such as Florida, California and Texas. California is due to release information on 2017 premiums in July, but Texas, Florida and other states won’t release any until the marketplace opens in November.

Still, the premium data that Kaiser obtained from 13 states and Washington D.C. could offer a clue to what people will face this fall.

“We have tracked these same states as an early indicator of premium changes for the past few years and, while on average they have never been far off from the national average, we don’t know yet whether they are necessarily representative for 2017,” said Cynthia Cox, a co-author of the Kaiser report.

The Kaiser analysis examined the two lowest-cost silver plans because more than two-thirds of marketplace enrollees choose them. The second lowest-cost plan also is the benchmark used to calculate government premium subsidies.