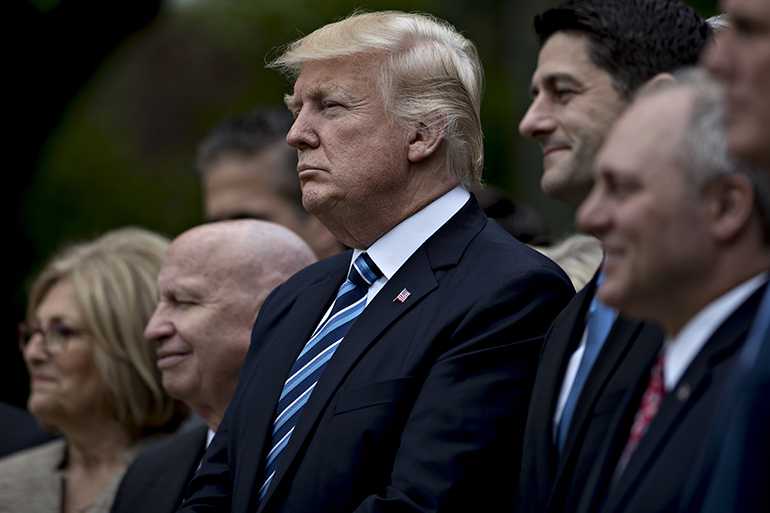 President Donald Trump, who appears increasingly frustrated by congressional Republicans’ inability to “repeal and replace” the Affordable Care Act, has led — since before he took office — the ballyhoo to let the law fail.

Over the weekend, he upped the political ante by taking aim at a new target: health coverage for members of Congress and some of their staffers.

“If a new HealthCare Bill is not approved quickly, BAILOUTS for Insurance Companies and BAILOUTS for Members of Congress will end very soon!” he tweeted Saturday.

The administration has been threatening for months to stop payments to health insurers for reimbursement of discounts they are required to provide to lower-income customers to offset deductibles and other cost-sharing. Now the president appears ready to take up an old fight over the payments provided to Congress and its staff.

The threat is rooted in a change in congressional health coverage that was ordered during the initial consideration of the ACA in 2010.

In an effort to embarrass Democrats — then in the majority — Republicans successfully pushed an amendment to the ACA bill that required members of Congress and their staffs to drop out of the federal employee health insurance program that has traditionally provided coverage to the denizens of Capitol Hill. Instead, under this GOP revision, lawmakers and some staffers would have to buy — and now do — their insurance through the measure’s health exchanges.

This is where things get messy.

Federal workers, like most people who work for large employers, get a substantial portion of their insurance premium paid as part of their overall compensation — about 72 percent under Federal Employee Health Benefits Program. Taking this employer contribution away from Hill staffers would be tantamount to a pay cut of thousands of dollars. Members of Congress from both parties feared it would result in a “brain drain” because making employees pay the full cost of insurance would make Capitol Hill a less desirable place to work.

“It could be disastrous,” said Norman Ornstein, a scholar at the conservative-leaning American Enterprise Institute who specializes in Congress. “Most staff are underpaid already,” he said.

And, while Congress could make it easier for members to give staffers raises and help make up the difference, “that is both cumbersome and controversial, and would be taxable,” he said. Employer-provided health insurance is not taxed as income.

When it came time to implement this part of the law, the Obama administration took steps to avoid problems.

First, it was determined that while the requirement applied to individual members of the Senate, House and their personal staffs, employees working for the congressional leadership or for committees were not required to drop their federal insurance.

Second, the Office of Personnel Management, essentially the federal government’s human resources department, ruled that members and staffers who did have to purchase coverage on the health exchanges could collect their employer contribution as long as they purchased plans through the District of Columbia’s health exchange, via its small-business program.

The amounts vary by the age of the beneficiary but they max out at just over $480 per month for a single employee, and just under $1,100 per month for family coverage.

While that satisfied Democrats and, behind closed doors, many Republicans, it angered many conservatives, who called it an illegal exemption from what should have been the rule.

“Until members of Congress are put in the exact same position” as everyone else in the exchanges, “we are not going to fix this problem,” said Sen. Ron Johnson (R-Wis.) on a conference call Monday.

Johnson has been fighting to undo the compromise since it was first announced, not just pushing legislation but also filing a federal lawsuit, which was ultimately dismissed. He said he told Senate leaders last week he would not vote for any final health bill unless he got a vote on his amendment to torpedo the congressional subsidies.

Trump, however, has the power as president to order the OPM to change its rules. While such an action would have to follow the federal rule-making process, it could happen in fairly short order.

“The policy was established by rule-making,” said Phil Kerpen, president of the American Commitment, a conservative organization, who has been fighting what he and conservatives call the “congressional bailout” for years. It can be undone “by the same mechanism,” he said.