By:
Caitlyn May of Salem Reporter 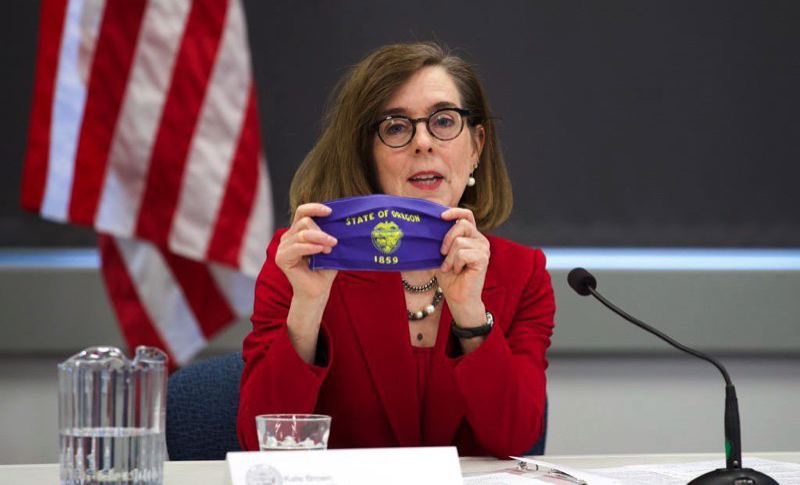 Salem’s largest employer is requiring COVID vaccines — and getting pushback from unions representing tens of thousands of state employees.

On Tuesday, Gov. Kate Brown said nearly all state employees, about 41,000 people, would be required to get a COVID vaccine to hold onto their jobs.

The announcement came as Brown reinstated Oregon’s mask mandate for both vaccinated and unvaccinated individuals just six weeks after declaring the state open for business again.

Brown said the measures were necessary to stop a quickly escalating spiral into record-breaking COVID cases and hospitalizations.

All members of the executive branch of the state’s government must be vaccinated by Oct. 18 or six weeks after any vaccine receives FDA approval, whichever is later, Brown said. President Joe Biden has set a fall target for FDA approval, but no specific date has been announced.

The mandate covers state agency employees, including those in agencies run by other elected officials — the Secretary of State’s Office, Department of Justice, State Treasury and Bureau of Labor and Industries. The governor’s office said about 70% of state employees — including those outside the executive branch — are already vaccinated.

AFSCME, a state employee union which represents state workers like corrections officers, those working at the Department of Environmental Quality and state lands employees, said it would be issuing a demand to bargain.

“We support people being fully vaccinated,” said executive director Stacy Chamberland. “We really encourage people to get vaccinated but we don’t think this is the best way to get shots into arms.”

Likewise, SEIU is calling for the state to negotiate.

In a statement released on Tuesday in response to the news Brown would mandate vaccines for state workers, the union said it believed everyone should get vaccinated but said the state would have to come to the negotiating table to discuss paid time off to be vaccinated as well as exemptions for those with a documented reason to refuse the vaccine.

The statement also called for reconsideration of the planned reopening of state offices on Sept. 1, saying state offices are slated to the increase in COVID cases should warrant flexibility to telework and additional protective equipment.

That reopening plan is under review, said Andrea Chiapella, spokesperson for the Department of Administrative Services.

She said the department did not have a count of the number of state employees currently working remotely.

Other employees in the executive branch have never had the option for remote work.

The president of the Association of Oregon Corrections Employees said the union is prepared to “explore its options.”

Whether the other two branches of state government will follow suit in mandating vaccination is still unknown.

"Any vaccination requirements would require a change in personnel rule and a conversation with the Capitol community. No decisions have been made yet," said Johnmartin Sherman-Lewis, spokesperson for Senate President Peter Courtney, D-Salem.

Judicial branch decisions would be left to the Chief Justice of the Oregon Supreme Court. According to the office of the Chief Justice, it has mirrored the governor’s orders in the past and any new policy regarding vaccine mandates will be announced via the department’s website.

Aug 13 2021
News source:
Salem Reporter
Keywords:
vaccine, mandate, Kate Brown, afscme
×
This article is for premium subscribers. If you are one, please sign in below.
You can see two more premium stories for free. To subscribe, click here. We depend on premium subscriptions to survive, and they are tax deductible.
Sign InGo Premium Not now