Staffing At Oregon Hospitals A Concern For Many, Survey Shows

By:
Suzanne Roig of The Bulletin

One nurse per patient in ICU at OHSU. OPB.jpg 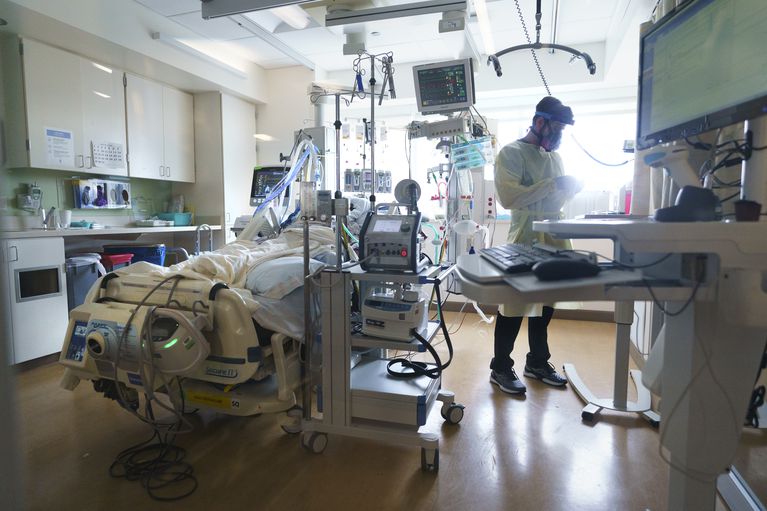 Area hospitals struggling to have enough staff or supplies to treat all patients as the pandemic continues is a chief concern among Oregonians surveyed recently by the Oregon Values and Beliefs Center.

A full 60% of those surveyed from Oct. 8-18 were “very concerned” that hospitals would not have enough staff to treat and oversee patients. Fewer than 5% were not concerned at all, according to the online survey of Oregon residents 18 and older.

More than a third, 34%, said that they “somewhat agreed” that COVID-19 patients should not be given priority over patients with other medical conditions, according to the survey. And 30% said they “strongly agreed” with that statement.

“The responses indicate that people are not experiencing impacts from shortages,” said Amaury Vogel, Oregon Values and Beliefs Center associate executive director. “Those 75 and older were far and away the most likely to say that CVOID-19 patients shouldn’t be seen over those with life-threatening illnesses.”

Ruth Martina Muller, a Bend resident, is among those who believe the thousands of patients waiting for surgery because there isn’t a bed at a hospital have been inconvenienced the most during COVID-19 surges.

St. Charles Health System, a regional hospital for eight Oregon counties, has said more than 2,000 nonemergency surgeries requiring an overnight stay had to be postponed because of a shortage of beds and staff.

“I have had several of my friends, one who was in excruciating agony, have to wait for surgery,” Muller said. “He couldn’t get in for back surgery for four months because the COVID-19 patients were tying up the beds.”

Tim Nihoul, a former Redmond resident, who was in Corvallis, said he has heard of many people who had been denied treatment because the hospital was full. Also concerning to Nihoul was how many people he had heard of with underlying health conditions who didn’t want to seek treatment because of the coronavirus.

“It’s not that there’s not enough beds,” Nihoul said. “It’s the staff that’s a problem. It’s a result of vaccine mandates that have just kicked in. I’m not an anti-vaxer, but I think it should be my choice whether I have a jab or not.

“It shouldn’t be dictated by bureaucrats or elected officials who may not follow legitimate science.”

The center’s survey was sent to 1,403 Oregon residents. The survey’s margin of error is between 1.6% to 2.6%. The Oregon Values and Beliefs Center is an independent, nonpartisan organization.

The largest demographic sample was among the 30-44 year olds and was nearly split evenly between males and females. The bulk of the respondents self-identified as white, earning less than $25,000 a year.

The Oregon Values and Beliefs Center, a nonpartisan charitable organization, has partnered with Pamplin Media Group and EO Media Group to report how Oregonians think and feel about various subjects.

The Oregon Values and Beliefs Center is committed to the highest level of public opinion research. To obtain that, the non-profit is building the largest online research panel of Oregonians in history to ensure that all voices are represented in discussions of public policy in a valid and statistically reliable way.

Selected panelists earn points for their participation, which can be redeemed for cash or donated to a charity. To learn more, visit oregonvbc.org.