By:
Troy Brynelson and Rachel Alexander 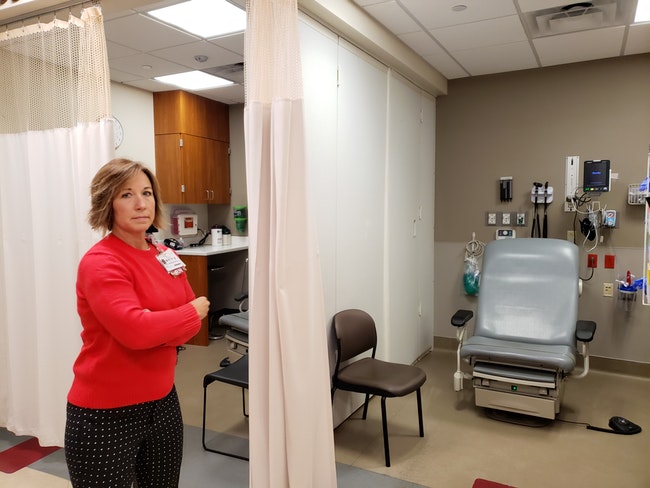 The sound system crackled to life in the busiest emergency room in the Northwest.

An ambulance was about to arrive at Salem Hospital just after 8 a.m. in late December.

A team of doctors, nurses and emergency technicians headed for one of the 54 critical treatment beds to be ready.

Medics wheeled in a patient on a stretcher, a machine in place to automatically continue chest compressions to help keep the person alive.

On average 300 times a day, the emergency room staff at Salem Hospital swings into action, sometimes so busy that patients with minor issues tire of waiting for care and leave.

The Salem ER is the busiest on the West Coast between Los Angeles and the Canadian border. No hospital in Washington or Oregon sees more emergency patients. Over the past five years, its annual visits by patients rose from 97,000 to 108,000, with the number of critically ill patients nearly doubling.

And with the region’s population booming and aging, that number is expected to climb. Yet despite the surging patient count, Salem Health has adapted and adjusted to care for more people who are more seriously ill coming from an ever-growing population. The hospital opened a new wing in its emergency room in 2018 to care for patients with less serious medical problems.

Federal data that evaluates hospital care shows that Salem Hospital has not had a safety violation related to emergency room care since at least 2015.

Life in the emergency room is a choreography of patients flowing in, medical staff triaging, and patients either checking in for more care or going home with treatment instructions in hand.

Overseeing it all is Dr. Joshua Walterscheid, medical director for Salem Emergency Physicians Service, which contracts with the hospital to staff the emergency room with doctors. Walterscheid exudes the calm confidence that comes from a decade of reacting to emergencies large and small.

On the nine shifts he personally takes in the ER each month, he tries to remain in a flow — busy and moving, but never keeping patients waiting too long.

On one day in November, he started his shift with two patients.

One came in with an abscessed tooth. Walterscheid introduced himself and started going through her medical history, and explained he would soon step away so nurses could numb her mouth. 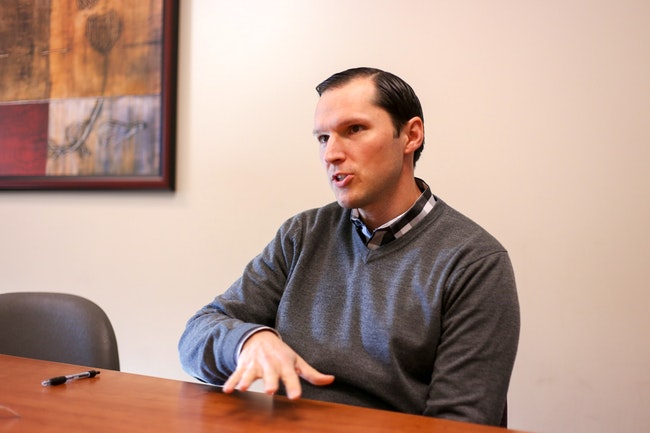 Dr. Joshua Walterscheid discusses a recent shift at an office at Salem Hospital. The hospital is one of the busiest on the West Coast./Troy Brynelson/Salem Reporter

He moved to another pod to tend to a patient complaining of cold symptoms. Walterscheid ordered tests to check for an influenza virus or pneumonia.

As he awaited those results, he moved back to the first patient to drain the abscess, prescribe antibiotics and help her find a low-cost dental clinic for a follow-up.

Over his shift, Walterscheid treated 18 patients. He said that’s a typical number.

His favorite work is in the part of the emergency department reserved for more life-threatening emergencies, where the care is “really challenging” and stressful.

“That kind of stress is motivating for me rather than detrimental,” he said. “If I do all the right things I can potentially help them get better again.”

The pace with which patients are seen, treated and sent home is increasingly important at Salem Hospital. The hospital is the mid-Willamette Valley’s only level two trauma center, meaning it’s capable of caring for everything from heart attacks and strokes to gunshot wounds and other critical injuries. Portland has two critical trauma centers. Hospitals in Corvallis, Eugene, Medford and Bend are the same as Salem, rated at level two.

The Willamette Valley has other hospitals, but they aren’t rated to handle the level of trauma that can be treated in Salem.

When medics respond to patients with cardiac problems or trauma, “they’re automatically going to Salem Hospital because of their ability to treat the patient,” said Mark Bjorklund, battalion chief for Marion County Fire District No. 1.

On average, a patient spends about 3 ½ hours in the emergency room – from checking in to treatment to release. That’s a bit higher than the industry average and only Oregon Health & Science University in Portland and Sacred Heart Medical Center-Riverbend in Springfield have longer averages.

The process for those who have to be admitted for more treatment in Salem takes on average about 5 ½ hours.

“We like it busy and flowing,” Walterscheid said. “It’s frustrating and can be challenging if it starts exceeding the capacity of either the physician staff, the nursing staff or the room availability.”

A busy emergency room in Salem can cause challenges for local fire and ambulance services, which sometimes opt to take patients elsewhere.

Bjorklund said long wait times in the emergency room can tie up medics, who are also firefighters.

“If they’re sitting at the emergency room for 45 minutes to an hour to hand off patients and a fire comes out, I can’t have an effective fire force,” he said. “It does hinder our operations a little bit.”

He said he’s addressed the matter with Salem Hospital officials and has seen an improvement to get medics out the door more quickly. A new pod in the emergency room helps when it’s open, he said, though when it’s not, wait times tend to climb like they did before.

Still, Bjorklund began a new protocol at Marion County Fire this year. If the wait time for medics at Salem Hospital grows longer than 30 minutes, they take patients to Santiam or Silverton for less serious problems like hangnails or broken bones. It’s something Salem Hospital employees are aware of, he said.

“We have to go with proper patient care. Sometimes the best patient care is not having our patients sit on a gurney for 45, 60 minutes,” he said. 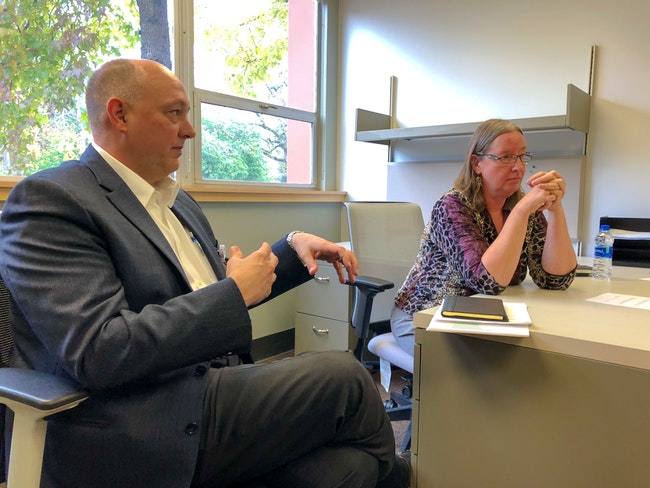 Doctors Rob Kelly, left, and Nicole VanDerHeyden discuss how Salem Health adapts to rising patient visits at the hospital. Salem Hospital is one of the busiest hospitals on the West Coast./Troy Brynelson/Salem Reporter

The emergency room is busiest in the morning, according to Rob Kelly, CEO of Salem Emergency Physicians Service. ER visits peak around early afternoon, then drop briefly, he said. It peaks again at about 5 or 6 p.m., then falls until midnight.

Most patients - about 70% - arrive between noon and midnight. That makes it much harder to see everyone without keeping people waiting, Kelly said.

Nancy Bee, nurse manager for the emergency department, worked in a dozen emergency rooms before arriving at Salem Hospital more than a decade ago. She said she’s confident in the staff as well as the procedures to get people treatment. Though her job is mostly administrative, she still occasionally works a night shift.

With the hospital so busy, it becomes more important to triage care.

Patients typically enter the emergency room either through a door reserved for medics or a door where private parties drop off patients.

The private entrance leads patients to a waiting room, clean and bare. The walls are beige. Its sterility — there is no art on the walls or even fake plants — leaves no harbor for viruses or bacteria. There is a television, the sound turned off. Patients and their company sit in well-padded chairs.

A triage nurse behind a clear screen discerns a patient’s problems and establishes the priority for treatment.

“My goal, not because it’s attainable but because that’s how you get close to it, is that no one would have to wait,” said Bee.

Some patients can’t be treated quickly. Walterscheid recently cared for an elderly woman with mild dementia who was brought by ambulance from the adult home where she lived. Caregivers noticed she wasn’t acting normally.

Walterscheid discovered the record of her medical history was spotty. He pieced it together with the notes from other doctors and prior patient history and by talking with her. Then he set to work diagnose her.

Confusion could be the result of a metabolic issue like low blood sugar, an infection, a thyroid problem, a stroke or brain bleed, he said. It’s his job to decide what’s most likely, test for it and begin treatment.

“A lot of times these are really complicated people,” Walterscheid said. “It’s a lot to process and balance.”

This case was more serious because of the patient’s age. Falls, pneumonia, abdominal pain and other injuries may not sound threatening, but they can be deadly for the elderly.

Cases like those are becoming more frequent at Salem Hospital, according to Kelly. Most signs point to Salem Hospital getting busier in the future.

Internal records provided to Salem Reporter show the hospital projects the population of people aged 60 and older will grow by 36% in the next 15 years.

Construction crews and supervisors, set to help the hospital expand, can often be seen pacing by the emergency room. Thick curtains hang near where Salem Health plans to add 150 beds, set to open by 2022.

“You’d have to build a 100-bed ER … and then most of the day not use it,” Kelly said. “It just doesn’t pencil out, as far as area involved or how to even manage something like that. So there will be some waiting times in those busiest times.”

To accommodate the growth without expanding the ER, the hospital has changed some of its practices, including adding staff. New care managers, for example, help patients find resources for care more suitable than another visit to the emergency room, such as in-home care.

Channeling people to such resources saves space in the emergency room and frees doctors who would otherwise have to help, according to Nicole VanDerHeyden, chief medical officer for Salem Health Medical Group.

“It’s just very hard for a physician, in terms of time, to provide care to other patients and do that,” she said.

(This story was published in an agreement between The Lund Report and Salem Reporter.)