The effort, initially funded by a 2006 grant, is now being extended to coordinated care organizations in southern Oregon
By:
Amanda Waldroupe 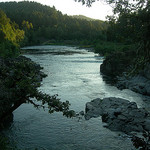 March 24, 2012—A quick, 15-minute appointment with a mental health counselor to talk about the effects of stress and anxiety when a person has an ulcer is radically different than a traditional hour long appointment with a counselor. But providers in southern Oregon are discovering that such appointments, which integrate mental healthcare in the same primary care setting, go a long way toward improving a patient’s health.

Last year, a similar model got under way in Coos County by Doctors of the Oregon Coast South, which also contracts with ADAPT.

Both managed care plans, which are intent on becoming coordinated care organizations (CCOs) in southern Oregon, are working with ADAPT to bolster the integration between mental and physical health.

“It’s obvious that this [type of integration] is the mandate of desire relative to CCOs,” said John Gardin, ADAPT’s chief clinical officer and research director.

In August, CCOs are expected to replace the state’s managed care organizations, and integrate the physical, mental and dental healthcare for the 650,000 people on the Oregon Health Plan and emphasize preventive care, decrease hospital utilization and reduce costs.

In the clinics run by these two managed care plans, social workers work directly with primary care physicians to integrate physical and mental healthcare care. When a physician believes a patient might have a mental health or chemical dependency problem, they’re referred directly to a social worker, who sees them for brief fifteen minute appointments.

“Typically, embedding mental health and substance abuse counselors in primary care has occurred in umbrella systems like Kaiser, HMOs, and federally qualified health centers,” Gardin said. “It’s very rare to have this kind of service in a private practice.”

Although rare, such a concept is becoming increasingly common elsewhere in Oregon. Central Oregon embeds mental health workers in primary care clinics, as well as the Old Town Clinic run by Central City Concern and other Portland-area nonprofits that serve vulnerable patients.

In 2006, after receiving a three-year $375,000 grant from the Health Resources and Health Management Administration, ADAPT began embedding licensed clinical social workers in a primary care clinic.

Within three years, that social worker saw 2,000 patients, half of which were Oregon Health Plan patients. Of that group, 15 percent saw the social worker more than five times, and their utilization including hospital visits decreased by 30 percent.

The short appointments patients had with the social worker were designed to target specific mental health problems that had exacerbated their physical health issues. “It’s just effective to give some basic tools, skills, training and development about what you can do,” Gardin said. “It’s way more practical.”

That way, there’s a higher probability of a patient seeing a mental health provider at the same clinic rather than being referred elsewhere. “Referrals just don’t work,” Gardin said. “They just won’t go.”

Physicians have responded positively to the program. “They can hand off problems for which they’re not well-equipped or well-trained to do,” Gardin said. “They can do what they went to medical school to do.”

However, integrating mental and physical healthcare does require a certain amount of flexibility by providers, Gardin said. “The medical environment is a very different environment from the counseling environment. The model is dependent on the physicians understanding that the social worker is there to help.”

Image for this story appears courtesy of Jimmy Emerson under CC BY-NC-ND 2.0 license.