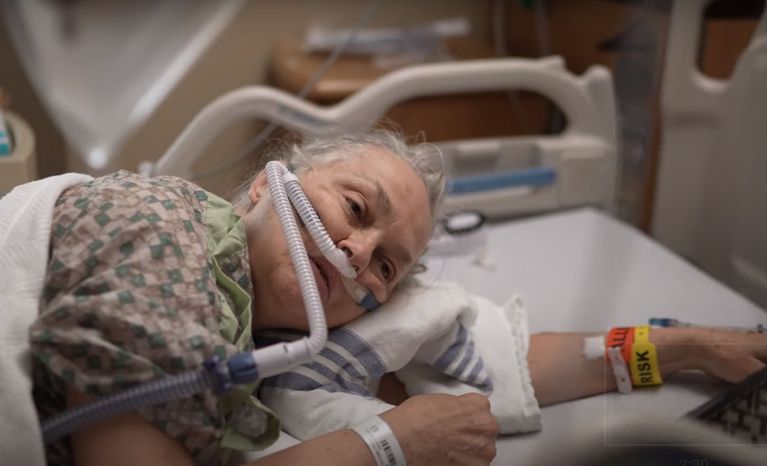 In this YouTube screenshot, an unvaccinated, COVID positive patient lies on her side to make breathing easier in an Aug. 31, 2021 video produced and published by St. Charles Health System./Photo Courtesy of OPB

“Talk to your family doctor,” public health advocates across the country have advised, hoping a trusted source will provide fact-based information about the risks of a widespread disease and the effectiveness of available vaccines.

But in rural Eastern Oregon, distrust in government initiatives runs so deep that even some primary care providers may be advising eligible patients against getting the shots, according to a state lawmaker from the region.

Rep. Mark Owens is a Republican who’s pushed back against Democratic Gov. Kate Brown and state health officials over vaccine requirements for health care workers and school staff, arguing the rules are an overreach that will only turn the vaccine skeptics into die-hard refusers.

“A lot of them are anti-government already,” Owens said in a recent interview. “Forcing it is not going to work.”

Unlike the majority of people in his district, Owens is vaccinated. He’s from Harney County, where just 46% of health care workers are vaccinated, the lowest such rate in the state. When the county judge signed a post on the local government’s Facebook page recently, urging vaccination and masking as ways to be a “frontline hero,” outrage dominated the replies. Some commenters claimed a doctor had advised them against the vaccines, before the post disappeared.

As COVID surges in Eastern Oregon's Harney County, a county administrator pleads for vaccinations/masking. FB responses show a backlash, conspiracy theories, and a couple of commenters claiming their doctor(s) urged them NOT to get vaccinated. pic.twitter.com/66GASnD02g

“There’s only one doctor that I know in Harney County who is advising against it, but I believe that it’s happening elsewhere,” Owens said. “He’s my doctor, so maybe I should sit down and ask him why.”

Harney County has about 7,500 residents, and few primary care providers. Multiple independent sources identified Dr. Thomas Fitzpatrick as a physician rumored to advise patients against COVID-19 vaccination in the tight knit community. OPB asked the Burns doctor if the claim is true.

“Not necessarily,” Fitzpatrick said. “I tell them they need to read both sides and make a decision. I’m against it for children, for sure. But [patients] have to make a decision on their own.”

The physician declined to say if he asks his patients to do their own research when they seek other types of medical advice, nor would he specify which sources he tells people to turn to for vaccine information.

“There’s plenty of sites on both sides. Look up, for instance, who invented the vaccine, look up the people who were making the questions. There’s big names everywhere asking that, you just have to look them up,” said Fitzpatrick, who records show graduated from medical school in 1987, and has been licensed in Oregon since 1990.

When asked if he recommended COVID-19 vaccination to any patients, Fitzpatrick said: “Some of my older patients with health problems, I have.”

At least 6,870 Oregonians under the age of 60 have been hospitalized with COVID-19 since the pandemic began, according to Oregon Health Authority data. In Central and Eastern Oregon, the sickest patients end up at St. Charles Health System, where as of Sept. 3, COVID-positive people who were not fully vaccinated filled about a quarter of all the health system’s beds.

In Aug. 31 footage released by the health system, a COVID patient isn’t sure exactly how many days she’s been in the hospital. Identified only by her first name, Stephanie’s voice is faint, each word an apparent struggle for her.

“I made a terrible mistake.” she whispers. “I should have taken the vaccine. It’s been hell.”

“It’s disheartening,” said Dr. Cynthia Maree, an infectious disease expert and the health system’s medical director of infection prevention services. “This is really a preventable disease at this point.”

People who haven’t gotten vaccinated should feel empowered to ask questions before making a choice, she said, pointing to the COVID-19 Real-Time Learning Network as a credible source of information.

“I am very sad for the people that have been given misinformation, because I think that they are putting themselves, their family members, and their community at extreme risk; and they’re keeping us from being able to move forward and get out of the pandemic,” Maree said.

For the vast majority of people 12 and older, she said the science is now clear:

“If you don’t have a contra-indication such as a severe allergic reaction to one of the components of the vaccine, it’s recommended at this time that you get vaccinated and protect yourself from COVID-19 disease.”

If Maree knew a fellow physician with doubts, she said, she would want to have a conversation with them “to see if we could get down to the root of where the misunderstandings might be...so we can all be on the same page when we’re making recommendations for our patients.”

Last month, the Federation of State medical boards warned that physicians who spread vaccine misinformation risk discipline or loss of their license to practice medicine.

A spokeswoman for the board said if it receives a complaint regarding doctors spreading vaccine misinformation or encouraging people to try unproven and unsafe drugs to cure COVID-19, the board would review “whether the licensee used the degree of care, skill and diligence that is used by ordinarily careful physicians in the same or similar circumstances.” Last year, the board suspended the license of a doctor in Polk County who refused to wear a mask and encouraged his patients similarly.

The video St. Charles released this week refers to anti-vaccine protesters picketing outside the Bend hospital recently. Inside the hospital, two exasperated doctors speak to the camera. Dr. Bryan Harris said he’s taken care of over 100 COVID patients in Redmond and Bend.

“There’s this voice deep down that says that this is preventable, why did this person put themselves in this position?” Harris said. “The louder voice is that we’re supposed to take care of everybody.”