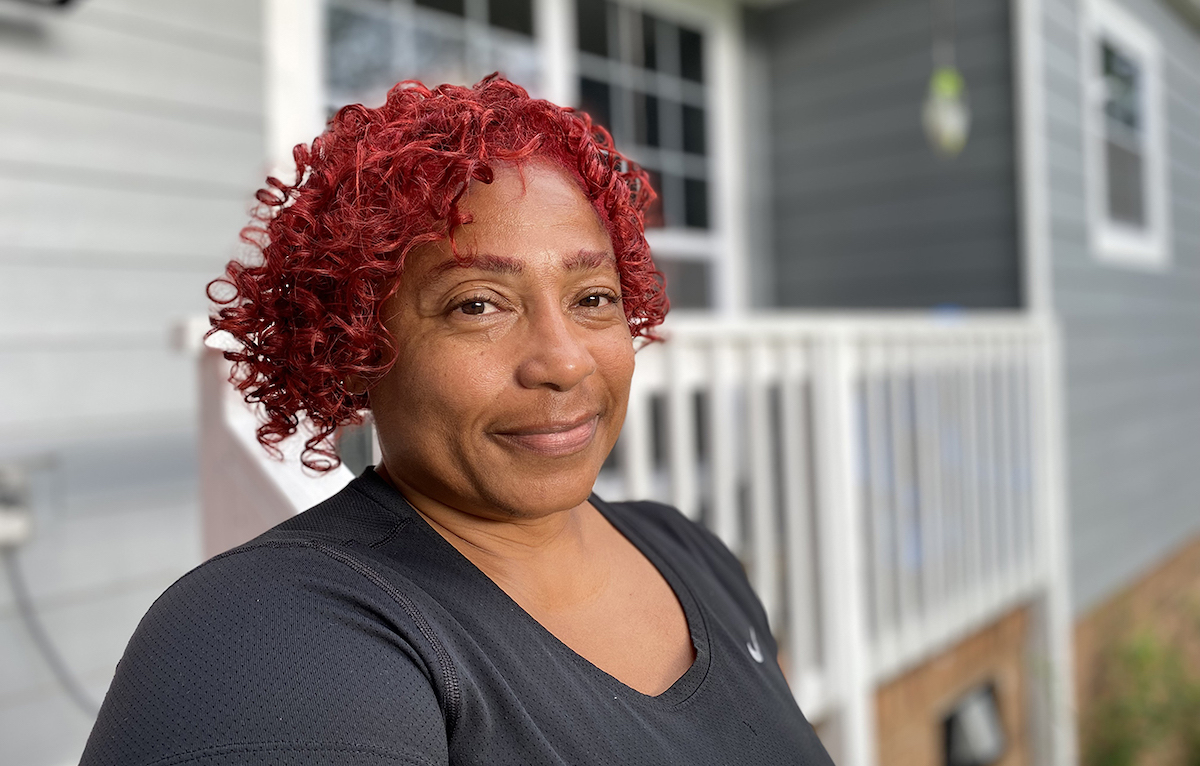 Pamela Winn, a registered nurse by training, was pregnant when incarcerated in 2008. After a miscarriage, she was put into solitary confinement for what she was told was medical observation. That eight months in solitary scarred her for life, she says./Katja Ridderbusch/KHN

Sometimes, Pamela Winn isn’t sure how to connect with people, even those she loves, like her 9-month-old granddaughter. When the baby is in her arms, “I sit there quietly, and I don’t know what to say. What to do,” she said, her eyes filling with tears. “My socializing skills are just not there anymore.”

On days like these, Winn, who lives south of Atlanta, is haunted by the memory of her 6-by-9-foot prison cell, where she spent eight months in solitary confinement more than 10 years ago. She said she now feels “safest when I’m by myself.”

It’s a common paradox of solitary confinement, said Craig Haney, a professor of social psychology at the University of California-Santa Cruz. Instead of craving the company of others after release from social isolation, many former prisoners want just the opposite.

“Solitary forces prisoners to live in a world without people,” he said. “And they adapt to it.”

Research has long shown that solitary confinement — isolating prisoners for weeks, months, years and sometimes decades — has devastating effects on their physical and mental health. Once released, either to the general prison population or to the outside world, they can face a suite of problems, like heart damage and depression. They’re often hypersensitive to light, sound, smell or touch. Like Winn, they may struggle to read social cues. People, Haney said, “become a source of anxiety rather than support.”

And the coronavirus pandemic may have made the situation worse.

Before the pandemic, the estimated number of people in solitary confinement in the U.S. ranged from 50,000 to 80,000 on any given day, though many advocacy organizations believe counts are underestimated. The Centers for Disease Control and Prevention states that medical isolation — the separation of people with a contagious disease from the rest of the population — should not hinge on solitary confinement. Yet, at the height of the pandemic last year, up to 300,000 incarcerated individuals were in solitary, according to estimates from Solitary Watch and The Marshall Project, non-profits focused on criminal justice.

“Jails and prisons, like many organizations, acted in fear,” said Tammie Gregg, deputy director of the American Civil Liberties Union’s National Prison Project. “They thought the way to keep people from infecting each other was to simply put them in solitary.”

Solitary confinement can serve many goals, from punishment to protection. And it is called many things — protective custody, restrictive or secure housing, administrative or disciplinary segregation, or simply “the Hole.”

“The conditions are essentially the same: It’s the extreme deprivation of any meaningful social contact,” Haney said.

In the so-called Mandela Rules, named for South African leader Nelson Mandela, who was imprisoned for 27 years, the United Nations associates solitary confinement lasting longer than 15 consecutive days with a form of torture. More than half of all U.S. states have introduced or passed some type of legislation restricting or regulating the use of solitary confinement — like limiting the practice for juveniles, for example. But it is still widely used in American jails and prisons.

Inmates in solitary typically live in a small cell for up to 23 hours a day. They have little sensory stimulation, like sunlight. Access to reading materials, educational programming and personal property is limited or nonexistent. Prisoners may get one hour in a recreational yard, an equally isolated area typically enclosed or surrounded by concrete walls, with a secured high window that opens for fresh air.

An analysis by researchers with the University of Colorado and Human Rights Watch suggests that more than half of all prison suicides occur in solitary confinement. A study conducted by the New York City Department of Health and Mental Hygiene found that the rate of self-harm among those in solitary is 10 times that of the general prison population.

The isolation can be particularly destabilizing for people with preexisting mental health conditions, often exacerbating underlying issues that cause people to end up behind bars in the first place. “It’s a downward spiral,” said Haney.

A Florida State University study published earlier this year found that prisoners with mental illness, especially bipolar disorder, severe depression and schizophrenia, were up to 170% more likely to be placed in solitary for extended periods. In many prisons, experts worry, mental health treatment is nonexistent, making matters worse.

But even among people without a history of mental health problems, it may be impossible to predict who is susceptible to the harmful effects of solitary confinement, including suicide.

Pamela Winn, a registered nurse by training, was incarcerated in 2008 and later convicted to a 6½-year federal prison sentence for health care fraud. As the now-53-year-old African American woman with red-colored curls sits in her ranch home, her mind goes back to what she said was the darkest time of her life.

When she entered a federal holding facility south of Atlanta, she said, she was a healthy woman. She was also six weeks pregnant. One day, she fell as she was trying to step into a van while shackled. Three months later, she miscarried and was put into solitary confinement for what she was told was medical observation.

After a few months, she was transferred to a municipal prison, where she was placed into solitary again, this time for protection. For a total of eight months, at two facilities, she lived in tiny cells, with iron beds, thin foam mattresses, and metal sinks with toilets attached.

“No window. No mirror. No clock. No concept of time,” she said. She was allowed to leave her cell for one hour a day. She could shower three times a week if staffers were available.

In the beginning, she replayed the traumatic memory of the night she lost her baby. Eventually, she joined in when other inmates screamed in their cells.

“I acted out. I threw stuff against the wall. I was angry,” she said. Before she went to sleep, she prayed for God to take her. “But I kept waking up.”

In Haney’s experience, prisoners who develop a strategy to withstand the excruciating loop of idleness have a better chance of surviving. Some individuals force themselves to maintain a routine, to act as if there is a coherence in their life, “even though there isn’t,” he said.

Winn said she developed a strategy: She would start the day by praying. She would picture what her two teenage sons were doing. She would do sit-ups and mental exercises, like remembering street names. After solitary, she served most of her sentence in a federal prison in Florida and was released in 2013.

Her time in solitary scarred her for life, she said. To this day, she has high blood pressure. Paranoia is a constant companion; her house is surrounded by a solid wooden fence with a security gate, and she has two Rottweilers. Small spaces make her anxious, and she can’t tolerate strangers getting too close, such as in a coffee shop line.

“She can read it and learn about everything that’s in my heart and on my mind … if I’m still here, if I’m not here, wherever I am.”

Both Haney and Gregg said jails and prisons have alternatives to long-term, extreme isolation. Mentally ill prisoners who engage in disciplinary infractions should be put into a treatment-oriented unit, said Haney.

For someone who acts violently, solitary confinement should be only a short-term solution aimed at acutely de-escalating the outburst, said Gregg. Afterward, those individuals should go to units that provide programming to address the root cause of their behavior. This may mean separation from the general prison population, but less time in total isolation.

A similar model could also apply to prisoners in solitary for their own safety, such as former Minneapolis police officer Derek Chauvin, who is serving a 22½-year-prison sentence for the murder of George Floyd. They could be placed in smaller units with individuals who have undergone a thorough risk assessment, and with access to education and training, Haney said.

Prisoner advocates are hopeful that solitary confinement in the U.S. will eventually be a concept of the past. In April, New York became the first state to codify the U.N.’s Mandela Rules that ban solitary after 15 consecutive days, when the Halt Solitary Confinement Act was signed into law. The legislation will take effect next April.

After Winn’s release from prison, she founded RestoreHER, a nonprofit that advocates to end the mass incarceration of women of color, and pregnant people, in particular. She also helped enact laws in Georgia and North Carolina that bar the shackling of pregnant women.

“What I’m doing now gives me some redemption,” she said.