Searching For A COVID Vaccine In Portland? Try Salem Instead 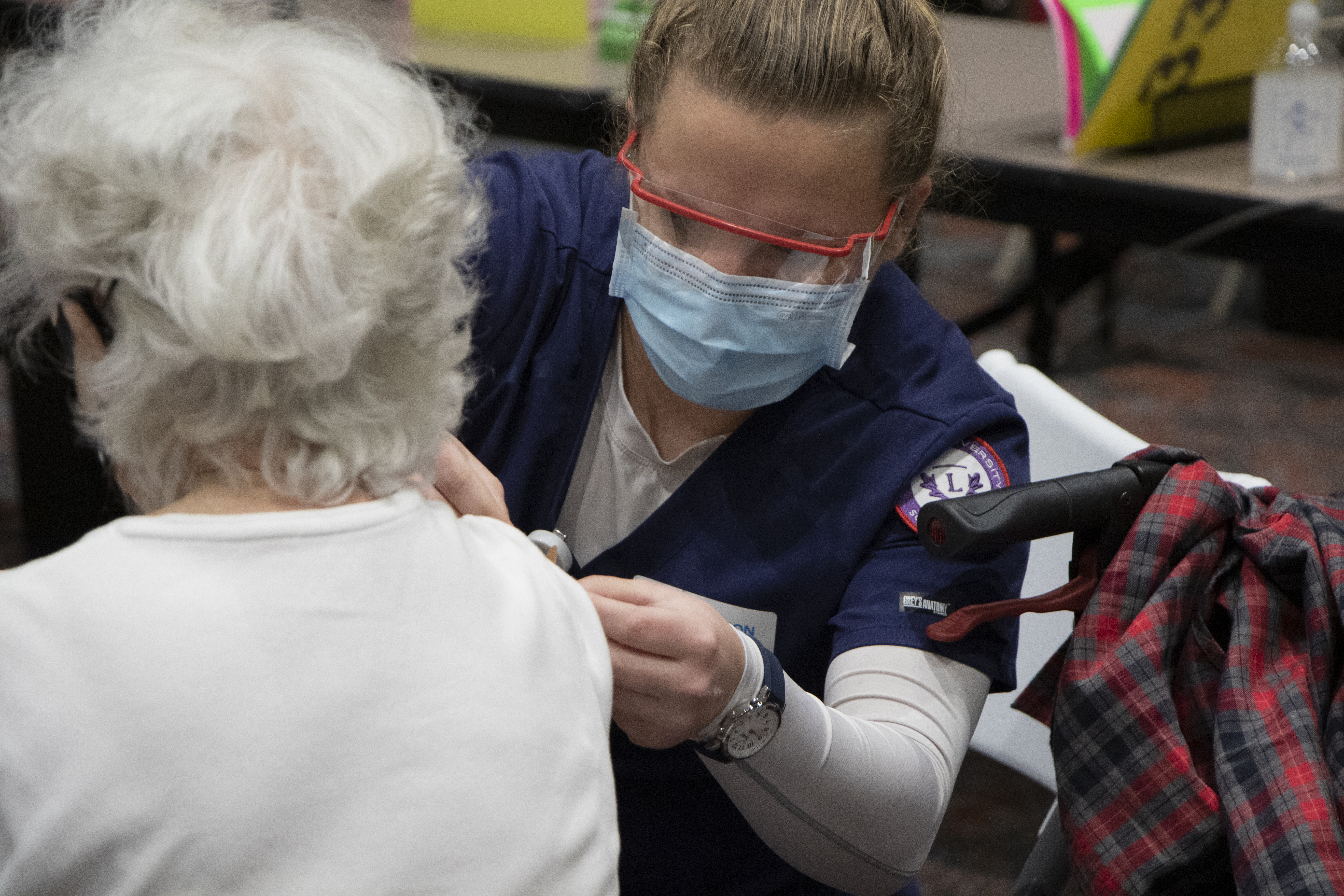 Southwest Portland resident Audrey Perino, 67, says she could barely sleep the three nights before March 1, the first day she and her husband were eligible to schedule COVID-19 vaccination appointments in Oregon.

But instead of battling the ferocious competition in the Portland market, she tried booking at the state fairgrounds in Salem, based on a tip from a friend.

The restless nights had been for naught: She immediately secured two appointments in Salem for later that week. Since then, Perino estimates she’s tipped off at least 25 other friends and acquaintances who also all have seamlessly booked their vaccinations about 45 miles to the south.

“The anxiety of getting an appointment is completely gone because you can get one instantaneously,” Perino said. “Yeah, you have to schlep to Salem, but you have an appointment.”

Perino has tapped into a peculiarity of Oregon’s vaccination distribution system: The Oregon Health Authority has not allocated all of its vaccines evenly across counties. An analysis by The Oregonian/OregonLive found significantly more vaccine going to some counties per capita compared to others.

For instance, Marion County last week received 63% more doses for seniors per capita than the four-county area of Multnomah, Clackamas, Washington and Columbia. This week, it was 23% more.

The disparities have sent leagues of Portland-area seniors to Marion County, Polk County, central Oregon or even up north over the Columbia River to Washington state. Officials there say Oregonians who don’t work in Washington aren’t welcome, but in many cases no one is checking vaccine recipients’ residency status.

Elderly residents in some particularly vaccine-deprived counties, including Clatsop, have even driven into Portland because they’ve been lucky enough to snag appointments among the fierce competition of the metro area. For weeks, Clatsop received significantly fewer doses per capita than even the Portland-area counties, leading the state to send it a “one-time catch-up” shipment of 1,600 doses this week, a 77% increase from the previous week. Clatsop was one of seven counties to get such a boost.

Oregon Health Authority Director Patrick Allen has said with few exceptions, nothing in the rules restricts Oregonians in one county from traveling to another to get vaccinated. That’s always true of appointments at pharmacies, which are open to any and all residents from anywhere in the state -- leading some residents to take hours-long road trips after they find available time slots.

But state officials have not gone out of their way tell shot-seeking Oregonians to look in other counties, where doses are more readily available.

Over the past few weeks, for example, freshly released appointments at the state fairgrounds in Salem have been relatively bountiful -- lingering on Salem Health’s website in some cases for more than 24 hours.

That compares to Hillsboro Stadium and Portland International Airport, where more than 3,900 appointments released for vaccinations later this month all vanished in about an hour Thursday morning.

Perino, the Portlander who will again travel to Salem for her second shot next week, said she’s baffled by the state’s distribution system. She’s a retired Bonneville Power Administration economist.

“I do spreadsheets, it’s really not that difficult,” Perino said. “It seems mysterious to me that there is plenty of vaccine in Salem and not enough in Portland.”

Dave Baden, chief financial officer for the Oregon Health Authority, said the state since February has been distributing vaccines proportionately based on the populations of people 65 and older in each county. But Baden said the formula grows more complicated from there, with some counties getting more doses because they have federally qualified health centers or mass vaccination clinics.

Some counties in February also complained that the state let their supplies run dry after they had started giving inoculations to seniors before the official statewide start date of Feb. 8 for residents 80 and older.

Baden said the state has given extra doses to some mass vaccination clinics, including the state fairgrounds in Marion County, because they need a robust supply to justify the size of the operation.

Baden said it’s particularly important to keep large clinics operating in anticipation of possibly half a million or more people with underlying conditions and frontline workers who will become eligible for inoculations March 29.

“Shutting them down would have been bad because it’s obviously hard for them to reopen,” Baden said of mass vaccination clinics across the state.

Baden said the state gives additional doses to the state fairgrounds site in recognition that it’s a regional draw. He said 64% of vaccine recipients there have been from Marion County, 10% from Polk County, 7% from Clackamas County and 7% from Multnomah County, with the rest from various other counties.

The Oregon Health Authority also has placed a special emphasis on getting extra vaccines to tribal governments across the state -- so much so that public health officials say some tribes have asked the state to cut back weekly shipments.

Sara Thompson, spokeswoman for the Confederated Tribes of Grand Ronde, said with more than 5,000 tribal members living across the United States and more than 10,000 Moderna doses administered so far at Grand Ronde, tribal government has been able to open up vaccinations not just to tribal employees and spouses, but the general public.

“As long as we have enough vaccine, we welcome it,” Thompson said.

Thompson said demand from people not associated with Grand Ronde has been huge, with about 1,000 people a day with no association to the Confederated Tribes filling out a vaccination interest form on the website.

But, again, that’s not something state officials have promoted, leaving it to particularly resourceful Oregonians to find those slots.

While the competition for vaccine appointments among seniors at Portland International Airport and area pharmacies is still intense, public health officials believe the state is reaching the tipping where appointments are becoming more readily accessible.

A few weeks ago, appointments at the airport were snapped up within 10 minutes of their release, instead of the hour it’s taking now.

Baden said he’s noticed a different indicator that demand is slowing: Several days ago the state finished sending every name of the more than 150,000 Portland area seniors listed in its GetVaccinated.Oregon.gov registry to the Oregon Convention Center mass vaccination site.

Baden said the site was unable to fill all of its available appointments, which stretch into April. As a result, Baden said in the absence of seniors to fill slots, the site operators asked the state for names of educators and people in phase 1a who hadn’t been vaccinated yet, then started offering them appointments.

“As we said, the first two weeks of March were going to be hard for everybody to get an appointment,” Baden said.

Larger shipments in coming weeks promised by the Biden Administration led Allen, the Oregon Health Authority’s director, to say that Oregon will open vaccination eligibility to all residents by May 1 -- two months earlier than it had planned. Allen said he expects by late March, 80% of seniors will have received at least one dose.

As of early this week, about 55% of Portland-area residents 65 and older had been vaccinated with at least one dose. Statewide, it’s 54%. Deschutes leads the state at 68%.

Some counties, however, have been struggling. Tiny Grant County, with 7,200 residents, trails the rest of the state with just 31% of seniors inoculated.

Baden highlights that as a concern -- wondering if the reason is some people may be reluctant to get vaccinated rather than not having access.

“Are we starting to see vaccine hesitancy?” Baden said. “I would argue yes, we are most definitely.”

This story was first published by The Oregonian/OregonLive and is posted here through a coronavirus-content sharing agreement among a dozen media outlets.