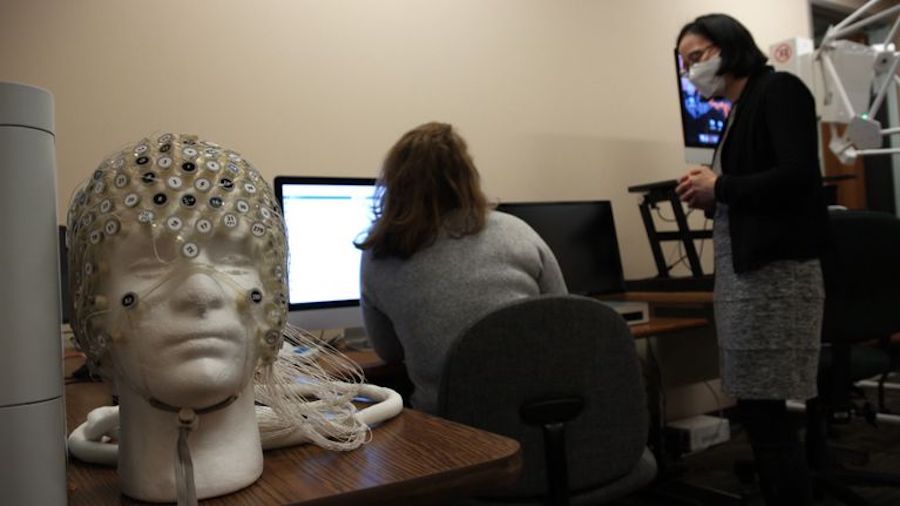 Early prototypes of any technology can be a little persnickety. Just ask Sofia Fluke, a test engineer at the Brain Electrophysiology Lab in Eugene.

She sits hunched over her desk with a small, orange flathead screwdriver, trying to replace the lid on an electronics casing about the size of a deck of cards.

The screw wobbles as she turns it.

“It easily falls out if you’re not very, very slow,” she says. “It’s a very delicate process because we just made all of this ourselves.”

The electronics casing houses the brains of a new device called the WISP — or the Wireless Interface Sensor Pod.

Its DIY origins are rather obvious. The casing attaches to what looks like a headlamp strap. Wired electrodes dangle off the sides and others are housed in a zip-up pouch on the front.

Despite the inelegance of this early design, the technology itself is anything but.

The WISP has the potential to change the way we think about sleep.

The yawning hole of sleepless nights

The WISP is a headband designed to be worn while sleeping. It harnesses brainwaves to give you a better night’s rest.

One in five people in the United States suffers from chronic sleep problems, according to the Centers for Disease Control and Prevention. And for a lot of them — including new parents, night shift workers, soldiers, and nearly everyone as they get older — the WISP may eventually provide relief from sleep deprivation and disrupted sleep.

“We used to think that the need to sleep was something we could minimize or conquer. But really over the past couple of decades, we’ve started to understand just how important it is,” said Oregon Health and Science University neurologist Miranda Lim.

And it’s not just how long we sleep. Quality matters.

“Pharmaceutical companies for decades have been seeking this ‘magic pill’ or ‘Holy Grail.’ They have medications out there that do increase total sleep duration, but many of them have side effects,” she said. “Those don’t address the quality of sleep.”

The goal of Lim and the team at BEL is to use WISP to influence a sleep stage known as “deep sleep” or slow-wave sleep.

“Sleep scientists, for many years now, have thought that the most restorative phase of sleep is slow-wave sleep, the sleep that you see usually in the first half of the night as soon as your head hits the pillow,” Lim said.

Brainwaves are normally chaotic. Neurons fire in different parts of your brain as you talk, move, dream and solve problems. It’s a purposeful cacophony. But during deep sleep, your brain waves slow down and synchronize, throbbing in slow oscillations.

The WISP detects when your brain is just starting to enter deep sleep.

“[WISP users] have a little nanocomputer at their bedside that helps to detect the brainwaves. And there we use machine learning so that we can recognize the brainwaves and tell which stage the sleep they’re in,” said BEL founder Don Tucker, a retired University of Oregon professor.

And this is where it gets weird.

The WISP then delivers a light electrical stimulus to different spots on the head.

“At that exact moment it sees [the slow waves starting], the device will hook onto those and stimulate the brain to make those larger and last longer,” Lim said.

It only takes a few minutes of WISP stimulation and synchronization.

“The interesting thing was that once we do that, the brain’s slow oscillations continue throughout the night. It’s like we jumpstart the natural rhythms and keep them going,” Tucker said.

The BEL team didn’t discover this quirk of neurobiology, but they have been able to isolate and target where these slow waves originate.

They’ve tested WISP on a few people in Oregon so far, and the results are promising.

So much so, that it caught the attention of the U.S. military, which recently linked sleep deprivation in soldiers to accidents, traumatic brain injury, PTSD and suicide.

The military is now funding a second round of clinical trials, contributing $4.3 million split between the WISP and other research connected to the project.

In preparation, BEL engineers are busy developing a new prototype that’ll be a little more sleek, stylish and comfortable.

It could be life-changing if the WISP delivers and gives sleep-deprived people a better night’s rest, but the work is still in the early stages.

“The concept is that you facilitate what is already there,” said Lisa Marshall, a neuroscientist at the University of Lübeck in Germany, who did early research on this phenomenon, but is not associated with the BEL project. “If [the stimulus is] individualized enough in topography and timing and all that, it could have a very good potential.”

The extent of that potential will be revealed during the human trials, which are slated to enroll a total of 90 people this summer at the University of Washington and the University of North Carolina. And even then, more refinement will likely be required.

“[You] might have to find the right kind of paradigm. Maybe you use it for three days and then you stop and then you start again. There might be some kind of optimum,” Marshall said. “There is usually adaptation of the body to whatever external influence there is. And some parameters will probably have to be changed.”

If effective, it’ll likely be years before the WISP is broadly available, though BEL does hope to market the device as a sleep aid. But this story of Pacific Northwest innovation is about much more than feeling more rested and alert in the morning.

“We think improving deep sleep is important for everybody who’s over 30 and not getting any younger,” Tucker said.

That’s because of the connection between deep sleep and how humans create, organize and store different types of memories.

“As you get older, as I can verify, your memory is not as good for all the incidental things that happen during the day. And there’s very good evidence that part of that’s because you’re losing the capacity for deep sleep,” he said. “We think that sleep is one of the ways to improve the brain function of an aging population.”

Tucker is not just talking about memories like where we left our keys or that secret ingredient in grandma’s pot pie.

Recent discoveries in neuroscience are linking the lack of sleep with much more serious memory disorders like Alzheimer’s and other types of dementia.

Jeffrey Iliff is a collaborator on the larger project that includes WISP testing. He studies neurodegeneration at the VA Puget Sound and the University of Washington and was part of the team that first identified the glymphatic pathways in 2012.

“The glymphatic system was described as the brain’s way of washing away wastes during the night that accumulate through the course of the day,” he said.

These proteins and other metabolic wastes are a byproduct of normal brain function. This taking-out-the-trash work done by the glymphatic system is a phenomenon Iliff calls “brainwashing.” It happens most efficiently during deep, slow-wave sleep.

When this brainwashing is stymied — possibly through lack of deep sleep — Iliff said the waste isn’t cleared as effectively. And it’s believed that build-ups of some of these by-products play a starring role in the development of Alzheimer’s disease.

This science is so new that most of what we know about the glymphatic system comes from what researchers have observed in mice.

“The glymphatic system right now is an enigma. We know it exists in mice. We think it exists in people and we have some proof. but we really don’t know what it looks like. We don’t know how it functions,” said Swati Rane Levendovszky, director of the University of Washington’s Diagnostic Imaging Sciences Center.

In science, if you can’t measure something, you can’t truly understand it.

This is where Rane Levendovszky’s MRI imaging work connected to the WISP trials looms large.

“MRI is my window into their brain,” she explained.

At the University of Washington Medical Center, Rane Levendovszky is developing non-invasive ways to measure the flow of the glymphatic system in humans after a good and bad night’s sleep.

The WISP trials are the perfect opportunity for this because the slow, synchronized waves of deep sleep are when the glymphatic system takes out the most trash.

“We are trying … to see the system from many different angles, hoping to catch some part of it. And then put the pieces of the puzzle together and have a picture of glymphatics and how it works,” she said.

If the team’s hypothesis holds, disrupting sleep will disrupt the glymphatic system, and improving deep sleep will make it work even better. Ideally, Rane Levendovszky’s new MRI techniques will be able to measure glymphatic flow in both cases.

The techniques could throw open the proverbial shutters on glymphatic science.

“They have implications that go way beyond this study… out into Alzheimer’s disease and Parkinson’s and headaches and concussions and all sorts of other conditions,” Iliff said.

Rane Levendovszky said she sees the potential for a clinical application as well. She envisions a time when people over 65 get a routine MRI to gauge how well their glymphatic system is working.

“That could be an indication that okay, you’re at risk of Alzheimer’s,” she said. “So you can help at first, maybe slow down the progression of the disease. And maybe at some point, develop technology or therapy that can just prevent it … at a later stage.”

And if getting better deep sleep can help prevent the disease, that technology might end up looking something like Don Tucker’s WISP headband, improving our sleep tonight and into the future.

“One of the questions is: Can we keep this up for weeks and months and really change somebody’s brain aging process? Can we make younger brains by helping to synchronize them in the deep sleep?” he asked.

And maybe if we sleep better, we’ll age better too.