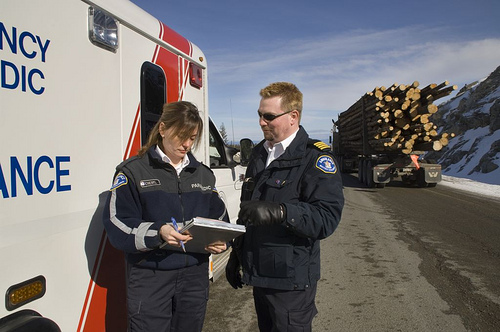 July 15, 2013 – Rural providers and emergency medical technicians will see an extension of the tax credits they've enjoyed for years, though the providers' tax credit comes with altered eligibility criteria.

Both tax credits were included in House Bill 3367, which included a host of changes to Oregon's earned income tax credit and passed after multiple hearings and amendments, one of which struck an increase in the tax credit that rural emergency medical services providers could receive.

“I wasn't expecting them to double the tax credit, but I was disappointed that efforts to do so didn't pass the Legislature,” said Louise Groomer, an EMT with the Chiloquin Ambulance Service in southern Oregon. Groomer was glad to see the tax credit extended for six years so rural EMTs won't have to ask the Legislature to renew their $250 tax credit next session. “Every little thank you and atta-boy and pat on the back helps, but a tax credit really hits home.”

Rural physicians (as well as dentists, mid-level providers such as nurse practitioners, and certified nurses' assistants), on the other hand, face tightened eligibility criteria for the tax credits (up to $5,000) they've enjoyed since the creation of the rural provider tax credit in 1989, said Bob Duehmig, communications director at the Oregon Office of Rural Health.

The cap is there to ensure providers can still make enough money to have a successful and sustainable practice, since reimbursement rates for public insurance programs are so low relative to private reimbursement.

“If you have a very large Medicare/Medicaid population, you can't make a go of it,” Duehmig said. “It allows the provider to participate in those programs while still succeeding.”

Dr. Janet Patin, a physician in Reedsport, said she thought the requirement to care for patients on public insurance was “almost not enough”: “I fully support the requirement that to get that tax credit, that people should be seeing the patients in need in their community.”

“The other big change on here is if you are a physician, an MD or a DO, and you are on a staff hospital that was designated as a rural referral center by the federal government prior to January 1, 1989 and you're in a community with a population of 14,000 but not more than 19,000, you will qualify for the tax credit,” he said. The only community in the state that meets those criteria is Coos Bay, where the previous legislation gave tax breaks to providers on the staff of hospitals of certain sizes based on the number of beds and their proximity to a large hospital, not based on the population of the community where they are located.

The provider tax also ends after two years, although such clauses have been written into rural provider tax credit legislation since it was implemented.

“It is an extremely important recruiting tool,” Patin said of the tax credit, adding she is “delighted it passed” but disappointed it sunsets in two years. “Having to fight the fight every two years is somewhat onerous.”

Image for this story by Province of British Columbia (CC BY-NC SA 2.0) via Flickr.