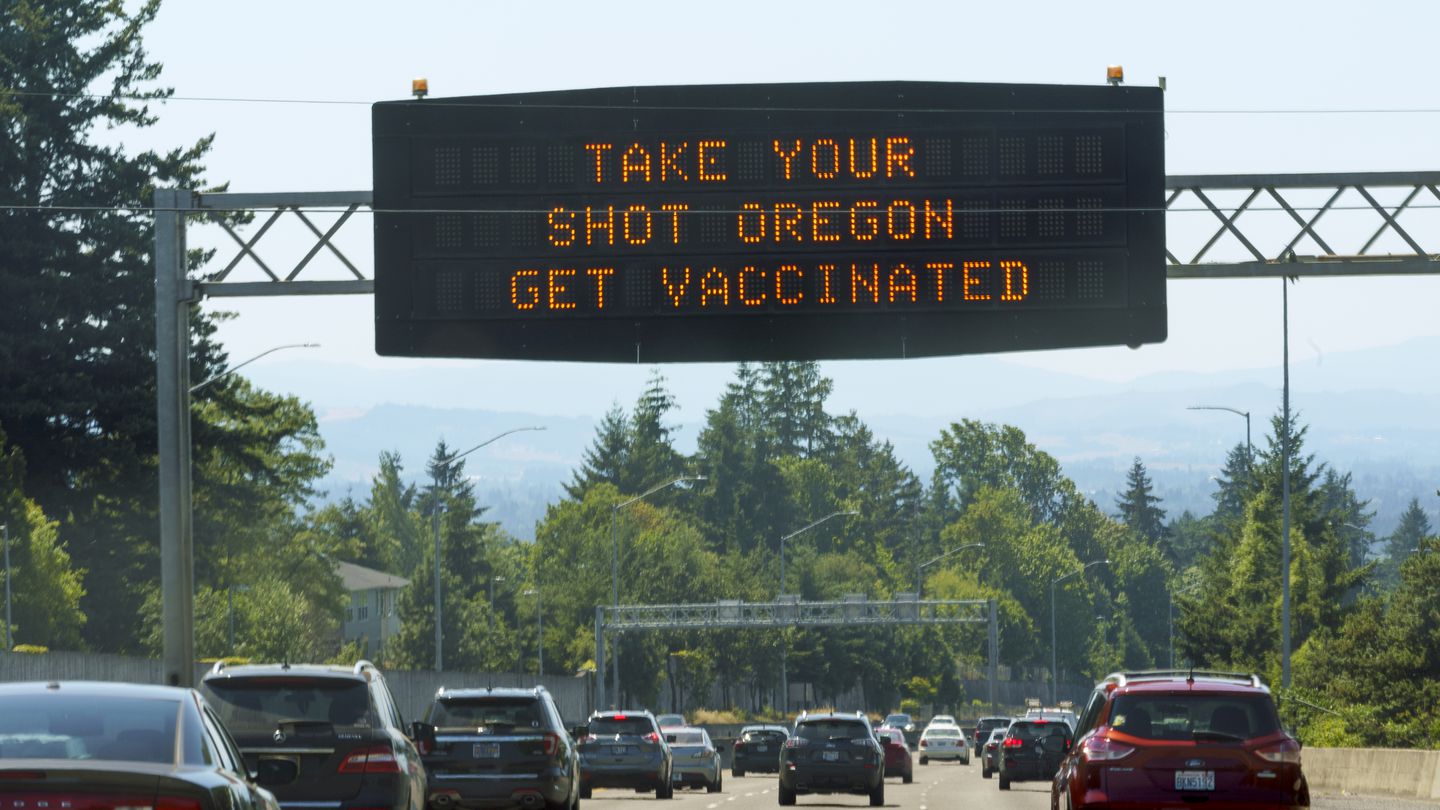 Early reports suggest the mandate has led to a small increase in the weekly rate of new vaccinations in recent months, as its proponents argued it would. But the vaccine requirement has also heightened the staffing crisis in the health care sector, as critics warned.

However, a combination of factors, among them broadly-crafted religious exemption policies allowing people to stay on the job without a vaccination, and state programs providing staffing assistance for employers with staffing holes, appear to be blunting the impact of the mandate in counties with low vaccination rates.

The city of Vale, in Malheur County on the Oregon-Idaho border, is among the jurisdictions that has leaned on approving religious exemptions allowed by the mandate to avoid a mass exodus of first responders.

Just 46% of adults in the county are vaccinated, the second lowest rate in the state.

Vale has a 50-50 split: Half the employees of the fire and ambulance department have been vaccinated; the other half have been granted religious exemptions.

“We had a big scare a few weeks ago when we were sitting at 30% vaccinated for our 24 employees,” said Todd Fuller, city manager of Vale.

“As we got closer to the deadline we had more and more people inquiring, and this religious exemption form was a means to keep them working. That’s the path we’ve chosen to go with.”

Leaders in rural Oregon, including Malheur County, have warned that enforcing the mandate threatened to close schools and take emergency services offline. Some counties declared states of emergency in a bid to persuade the governor to drop the mandate.

Fuller said by the end of last week, the share of his first responders who were vaccinated ticked up from 30% to 50%. He doesn’t agree with the mandate as a matter of policy, but thinks it may have convinced a few people to get their shots.

“If I was to speculate, I would say yes, it did change a few minds,” he said.

Vale is not requiring its unvaccinated workers to be regularly tested for COVID-19 or follow any additional safety protocols. Fuller said fire and ambulance department staff wear adequate personal protective gear regardless of their vaccination status.

Two-hundred fifty miles away, in Lake County, 58% of the employees of the Lake Health District were vaccinated, as of the Oct. 18 deadline.

All but four of the Lake Health District’s unvaccinated employees requested and received religious or medical exemptions to the vaccine.

“I am glad that we had an option because it was vital for them to keep working for us,” said Charlie Tveit, Lake Health District CEO.

“The position we took is that whether a person has a medical or religious exemption, that is a private issue.”

Unvaccinated staff are not being required to work remotely or follow any additional safety measures. Tveit said caregivers are already required to wear PPE regardless of vaccination status, and the county has had a low rate of COVID-19 infections and deaths.

Lake and Malheur counties aren’t alone in relying on allowable exemptions — so is the Oregon Department of Corrections. 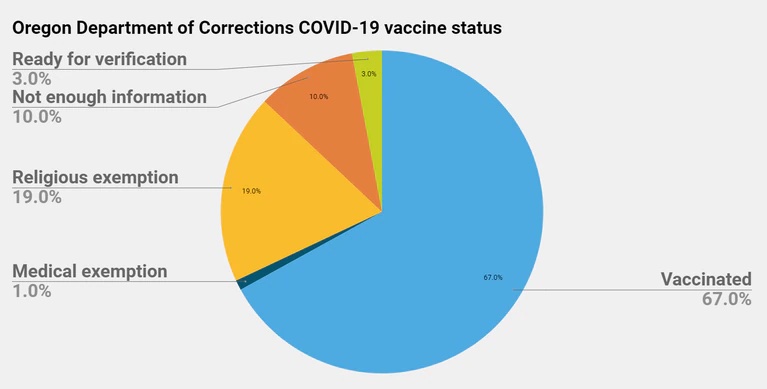 Most Department of Corrections employees can take advantage of a grace period, negotiated by public sector unions. The extension gives those employees and many other government workers until Nov. 30 to get vaccinated.

However, employees represented by AFSCME Council 75 must at least start the vaccination process by Oct. 18, DOC officials said Monday. Another 750 DOC employees at the Oregon State Penitentiary, the Oregon State Correctional Institution and the South Fork Forest Camp are represented by a different union and are still obligated to meet the original Oct. 18 vaccination deadline, DOC said.

Some health systems in Oregon have taken a more rigorous approach to evaluating exemption requests — and are seeing some staff depart.

By law, employees have to demonstrate that their request is due to a sincerely held religious belief, and employers can deny a request on the grounds that accommodating it will pose an undue hardship or pose a direct threat to the health and safety of others.

The legitimate grounds for a medical exemption are even more narrow.

The vaccine is considered safe and has been recommended for people with underlying medical conditions, including pregnant people and those with compromised immune systems. Experts say the only clear reason for a person to seek a medical exemption is if they have had a severe allergic reaction to vaccine components.

The St. Charles Health System in Bend has reported losing more than 100 full-time staff in the past month, departures it attributes in part to the vaccine mandate. St Charles is relying on traveling nurses, including 120 hired through a state contract, and staffing help from the Oregon National Guard.

As of Monday, 93.5% of its staff were vaccinated. St Charles approved a little over half of the requests it received for medical and religious exemptions.

Of the 323 caregivers who applied for exemptions, 49 were ultimately approved and accommodated with remote work, according to a press release from St. Charles. The health system says another 98 of the 323 chose to start their vaccination series after initially requesting an exception.

“Our caregivers had a choice and we respect each person no matter what decision they made. We sincerely thank those caregivers for their service, especially throughout the pandemic,” said Dr. Jeff Absalon, the health system’s chief physician executive. “This hasn’t been an easy time for any of us.”

Including the recent resignations, St. Charles is trying to fill 940 open positions.

In Southern Oregon, the Asante Health System, which was overwhelmed in August by a surge in COVID-19 hospitalizations driven by the delta variant, is warning that staffing shortages due to the vaccination deadline could affect its services and operations.

Asante, like St. Charles, is already receiving staffing support from the Oregon National Guard and from state-funded temporary health workers.

The health system submitted a new request for additional staff last week to the Oregon Office of Emergency Management.

Statewide, many are already so short-staffed they have already limited the number of residents they can admit.

The Oregon Health Care Association, the lobby and trade group for the industry, publicly supported the mandate for health workers, but says the timing of it risks exacerbating the industry’s workforce crisis in the midst of the delta surge. Officials say a broader staffing crunch may result from workers leaving positions at lower-paying facilities to fill openings at places offering more money.

“We are also concerned about the domino effect of staffing losses in hospitals and other acute care settings causing losses of nurses and certified nursing assistants from long term care settings, who simply can’t compete with the wages that hospitals are willing to pay currently,” said Rosie Ward, a senior vice president at OHCA.

According to Ward, providers in the Portland metro area expect a loss of 3% to 5% of their workforce due to the mandate, while in other parts of the state, providers expect to lose 20% or more of their employees.

To address the staffing crisis in the industry, the state is offering a higher Medicaid reimbursement rate to facilities that pay their certified nurses assistants at least $17 an hour. It’s also offering reimbursement for $500 bonuses for nursing home facility staff, regardless of whether a facility participates in Medicaid.

“Our hope is that long term care providers will have enough well-trained, qualified caregivers to prevent having to move residents out of their current living situations due to a lack of staff,” Ward said.