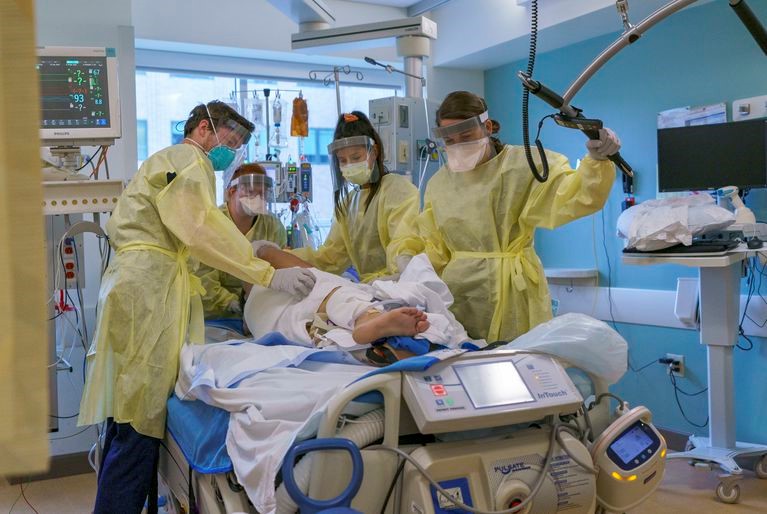 Staff care for a COVID-19 patient at Oregon Health & Science University./Courtesy of OHSU/OCC

Oregonians at risk for a severe COVID infection now have access to free online health care visits thanks to a new state program.

The Oregon Health Authority announced Tuesday that a California-based health care company, Color Health, will offer telehealth sessions online or on the phone to Oregonians who are at risk of developing a severe COVID infection. They include people aged 65 and over and those with compromised immune systems.

The visits will be free and available to everyone, regardless of their insurance status.

The program will run through the end of December and could cost the state up to $1.2 million, according to the contract, which the Capital Chronicle obtained through a public records request. Jonathan Modie, a spokesman for the health authority, said the program will serve up to 600 people a week.

The contract was signed Sept. 12. Modie said the agency waited to secure funding to launch it. Its purpose is to help Oregonians at risk for severe COVID gain access to an antiviral medication without leaving home.

Join the video or phone call.

Prescriptions can be picked up at a local pharmacy or delivered to homes free of charge.

Those given a prescription can pick it up at their local pharmacy or get home delivery.

The service is available from 8 a.m. to 8 p.m. seven days a week, and consultations are offered in 17 languages. For more information, visit COVID-19 treatments or call the company at 833-273-6330.

“These medicines can help prevent severe COVID-19 illness, hospitalization and even death,” Dr. Andrea Lara, therapeutics clinical and equity lead with Oregon Health Authority, said in a statement. “They should be available for free for anyone who needs them, whether or not the person has health insurance.”

She said the program will especially benefit communities hit hardest by COVID, including tribal nations and communities of color.

The program aims to reach people who are uninsured or underinsured, Modie said. Nearly 6% of Oregonians lack health insurance.

“Many people who are underinsured or uninsured, or who are unable to access a test to treat site, have a difficult time accessing a clinician who can prescribe antiviral medications.” Modie said. “This program allows people to talk to a clinician virtually, without having to leave their home, and get a prescription right away if they qualify.”

One of the antivirals, Paxlovid, was approved by the Federal Drug Administration under an emergency use authorization late last year and has been widely taken, including by President Joe Biden this summer. In a clinical trial, it was 90% effective at preventing severe symptoms in unvaccinated patients. It is available to people aged 12 and older who’ve tested positive for COVID and are at risk of severe symptoms. The three-pill-a-day regimen has to start within five days of the onset of symptoms and continue for five days.

Modie said patients have to declare that they had a positive test but do not have to produce proof of one. If the Color Health provider considers it appropriate, they will prescribe Paxlovid.

Oregon appears to have enough Paxlovid to meet the demand. The health authority receives 1,180 courses of Paxlovid per week from the federal government for distribution to hospitals, clinics and local pharmacies, Modie said.

“Additionally, Paxlovid is widely available in hundreds of retail Oregon pharmacies,” Modie said. “According to our numbers, we have about 14,000 courses of Paxlovid throughout the state, including pharmacies.”

Experts say Paxlovid is effective against omicron, which helped put 1,130 people in the hospital last January. Since then, the pandemic has slowed, with fewer people hospitalized, fewer cases emerging every day on average and fewer deaths. But people are still getting sick, going to the hospital and dying. Oregon Health Authority data shows that more than 8,700 people in Oregon have died from COVID and at least 914,000 have been infected. The state does not log most at-home tests.

People 65 and over have continued to account for the highest number of hospitalizations. Right now, about 230 people with COVID are hospitalized, including nearly 30 in intensive care units. That compares with 1,130 people hospitalized last January.