Ride Service Shifts from State to CCOs in Corvallis, Eugene

Until now, the state has delayed the requirement that CCOs contract non-emergency medical transportation for Oregon Health Plan members. By January, the free service will expand to all members, and the responsibility for the service will shift entirely on the backs of local health organizations.
By:
Christopher David Gray 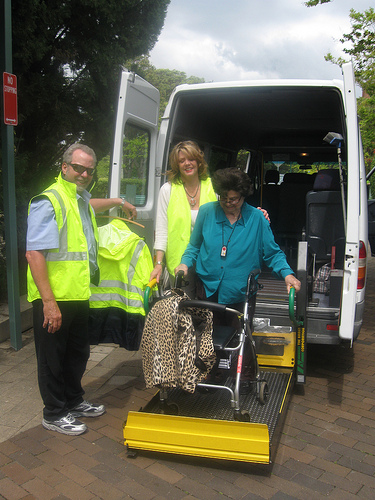 July 29, 2013 — If all goes as planned, Oregon Health Plan members will see little disruption as the responsibility for a critical social service gets shifted from the state to local coordinated care organizations — free rides to medical appointments for members who lack reliable transportation.

Certain Oregon Health Plan members have long had this service — if they need to get to a doctor in a non-emergency situation, they don’t have to worry — just call for a ride.

But now two CCOs — InterCommunity Health Network in the Corvallis area and Trillium Community Health Plan in Eugene have taken over the service from the state, and their goal is to make the transition as seamless as possible, using existing ride providers.

“That integration is very key in making it effective,” said Cristie Lynch, the spokeswoman for InterCommunity, which serves people in Lincoln, Benton and Linn counties.

Lynch said InterCommunity had sent postcards to its members and primary care providers informing them of the service, and would also be posting information at Department of Human Service offices, where members might receive other benefits such as financial assistance or food stamps.

Increased advertising and education will be critical in getting clients to use the ride service, which can serve two key purposes — limiting the use of expensive ambulances to truly emergency situations, and ensuring members don’t skip needed appointments just because they’re stuck at home and delay medical care until their conditions worsen.

“We don’t want them to go to the ER. We want them to establish a relationship with their provider,” said Shannon Conley, the chief administrative officer at Trillium.

Clients are asked to give two or three days’ notice when they call for a ride to an appointment, but they can still get rides with shorter notice, within reason.

Non-emergency medical transportation for the rest of the state continues to be contracted through the Oregon Health Authority, but the remaining CCOs have until January to begin the new service. Some intend to take over this service in October, while others will wait until January.

Like dental care, the state held back the requirement that the CCOs cover ride services when they launched a year ago. Since then, CCOs have already been paying for ambulances out of their monthly global budget.

“The integration of behavioral and physical health was considered a really huge lift,” said Karynn Fish, a spokeswoman for the Oregon Health Authority. “The other systems were delayed to give the CCOs time to put the big pieces together.”

Trillium contracts its ride service through the Lane Transit District, which uses RideSource Mobility Services to assist clients with bus passes, or taxis and vans when and where fixed route services are impractical. In December, the last month for which data was available, about 2,300 individuals used this service, representing 5 percent of its members in any given month.

If someone needs to go outside Eugene to, say, Portland, to receive medical care, they can get a ride and even assistance with meals and a motel room if their visit requires an overnight stay.

Lynch said InterCommunity hires Cascade West Ride Line to offer rides, and the service has about 1,200 frequent users, but she expected the demand to increase substantially, when coverage expands next year.

For now, the service is only available for CCO members in the Oregon Health Plan Plus program, which includes children, expectant mothers and people with chronic disabilities.

Childless adults who have Medicaid simply because they are poor do not qualify, but that will change in January, when Medicaid expands to cover anyone who earns below 138 percent of the federal poverty level, as the federal government will pick up a greater portion of the tab.

Even if low-income adults in an outlying community like Newport have a car to get around town, they might not want to risk travel through the Coast Range to reach a medical facility in Corvallis, and are free to call for a ride.

By that time, all CCOs across the state are required to take over the service from the Oregon Health Authority and include those costs in their global budget, which will increase proportionately to reflect the expense of the new service.

Image for this story by Mosman Council (CC BY 2.0) via Flickr.