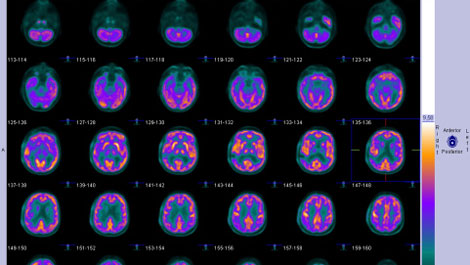 Scientists say early detection of Alzheimer’s disease could be the key to treating the disease before it causes irreversible brain damage or mental decline while research toward early detection has improved.

Studies are being conducted to identify markers in the brain that show possible Alzheimer’s disease before a person starts experiencing dementia, said Dr. Scott N. Losk, a nationally-recognized neuropsychologist and clinical psychologist with Summit Research Network.

“That’s a flip flop from the way we’ve traditionally done it,” he said, adding that typically a patient shows signs of dementia first and is then diagnosed with the disease.

PET scanning is being done in research studies to detect amyloids, a plaque on the brain often seen in Alzheimer’s patients.

“The bottom line is if we can reduce or lower Amyloid in the brain we’ve got potential to stabilize cognition to have it not get any worse,” Losk said.

In 2013, the Society of Nuclear Medicine and Molecular Imaging and the Alzheimer’s Association Amyloid Imaging Taskforce concluded that amyloid imaging could “potentially be helpful in the diagnosis of people with cognitive impairment when considered along with other clinical information, and when performed according to standardized protocols by trained staff,” according to the Alzheimer’s Association.

“The hope is future treatments could then target the disease in its earliest stages, before irreversible brain damage or mental decline has occurred. Research on new strategies for earlier diagnosis is among the most active areas in Alzheimer's science,” it concluded.

Losk, who has conducted over 50 clinical trials, said early detection and the ability to treat the underlying disease are two major movements in Alzheimer’s research.

People who have a family history of the disease or who struggle with anxiety or depression can make lifestyle changes to improve their brain function, Losk said, such as limiting alcohol consumption, quitting smoking, eating healthy, exercising regularly and increasing social engagement.

About 5.5 million in the United States and nearly 40 million worldwide suffer from Alzheimer’s disease and dementia with the main risk factor being age. Losk said the disease is difficult to treat and although some medications will ease symptoms, they aren’t a cure-all. “Eventually it catches up with the person and they have a tendency to decline.”