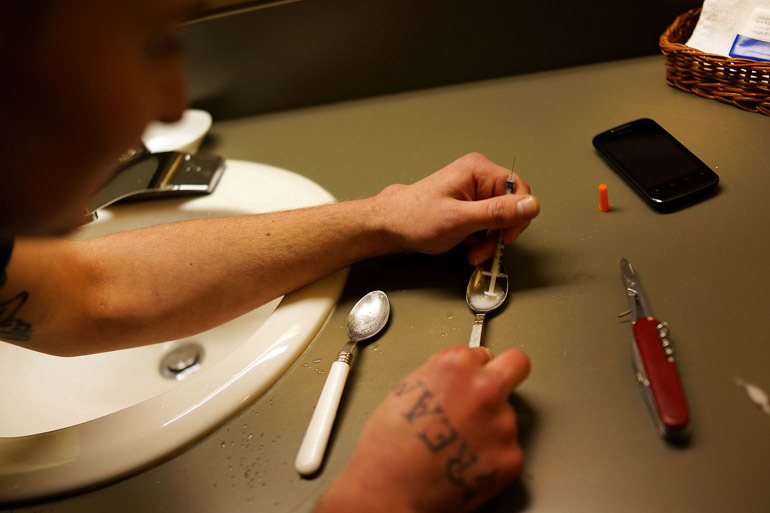 A new review article published Wednesday in the New England Journal of Medicine provides insights for policymakers on how to curb this deadly trend.

Almost 19,000 people died from overdoses of prescription painkillers — drugs like morphine and OxyContin — in 2014, the most recent year for which statistics are available, according to the Centers for Disease Control and Prevention. That same year, about 10,600 died from heroin overdoses — more than five times the number of fatalities from them in 2000.

Concern about the issue has grown in a number of states where heroin and painkiller addiction is particularly common. Vermont Gov. Peter Shumlin focused his entire 2014 state-of-the-state address on heroin addiction. Meanwhile, an increased focus in New England states on curbing painkiller abuse has resulted in the issue emerging as an area of national interest, with a number of presidential candidates discussing the problem as they campaign in New Hampshire. Last week, Republican presidential candidate Jeb Bush rolled out a set of proposals to fight drug addiction. That puts him in the company of GOP rivals like New Jersey Gov. Chris Christie, Kentucky Sen. Rand Paul, Carly Fiorina and Democrats Hillary Clinton and Vermont Sen. Bernie Sanders, all of whom have made addiction major campaign issues.

The correlation between painkillers and heroin, the authors suggest, could be in part because the drugs are chemically very similar. Heroin, meanwhile, has become much cheaper than it was 20 years ago, the review notes.

“Once someone has a significant habit or addiction to [prescription painkillers], heroin turned out to be cheaper and readily accessible,” said Wilson Compton, the first author on the review article and deputy director of the National Institutes of Health’s National Institute on Drug Abuse.

Policymakers have proposed a number of solutions: for instance promoting treatment for addicts, and preventing addiction by limiting the supply for painkillers to begin with. That could involve coming up with better prescription guidelines for doctors and cracking down on so-called “pill mills,” the purportedly corrupt physicians who may majorly overprescribe.

The CDC is currently finalizing new guidelines for doctors to help them better prescribe medication for pain, Compton said.

Meanwhile, cracking down on “pill mills” could address some of the problem but would hardly suffice, said Jonathan Chen, an instructor at the Stanford University School of Medicine who has researched painkiller abuse but is not associated with the review article. The top 10 percent of doctors prescribe about 57 percent of all painkillers, according to a study he co-authored that came out last December. That’s fairly concentrated but still consistent with other kinds of medications that aren’t abused — about 63 percent of all medications are prescribed by only 10 percent of physicians.

The NEJM article addresses another issue that’s been raised: whether efforts to curb inappropriate painkiller use will just drive more people to use heroin instead. On the whole, the article said that studies in a variety of states, including North Carolina, Wisconsin, Florida and New York, did not find a clear link between those efforts and increases in heroin deaths.

And even when there were more deaths from heroin, Chen noted, those were more than offset by the number of lives saved when people didn’t abuse prescription drugs.

“For an individual patient, when a doctor cuts them off [from painkillers], that may have been a strong motivation” to get heroin, Compton said. But on a larger basis, that isn’t generally the case, the review indicated.

To fully address painkiller abuse — and to curb heroin addiction — policymakers need to keep  people from getting started with drug abuse, but also to get treatment for those who need help, Compton said.

“When you turn a faucet down on a bathtub, you still have an awful lot of water before you drain it out,” he said. “We need to be thinking about intervention.”

20 years ago or so, "pain" became the "5th vital sign" and all doctors were encouraged to prescribe increasing doses of opiates for pain.

The pharmaceutical industry stepped right up, and produced highly concentrated, highly addictive products -- oxyContin, and the rest-- and made a killing.

The "Pain Specialty Clinics" got so busy treating "chronic pain" with injections and procedures, they couldn't keep up with monitoring mere prescription drugs.  On more than one occasion, I had to agree to "manage" a patient's narcotic pain med use (to be prescribed by the pain specialist) before they would accept the referral for consultation.

Now the "pain specialists" don't seem to prescribe meds at all.  They just implant devices and do injections - and are making a killing.

Meanwhile, as usual, the "PCP" is the fall guy for the whole corrupt system.  It is "my" fault that all these people are addicted -- and I am the one who has to face them when I tell them that their chronic narcotic prescriptions (even the ones that are being used successfully and appropriately -- at least by the standards of a few years ago) are going to be withdrawn under the new rules.

I look around for help, but none is forthcoming.

Our CCO made a big deal of it a year ago, and their contribution was a "behavioral pain clinic" which was well intended, but ultimately of limited use -- and especially troubling, out of reach for most of my patients who didn't have the right kind of insurance.

Some days I just hate to go to the offce any more.