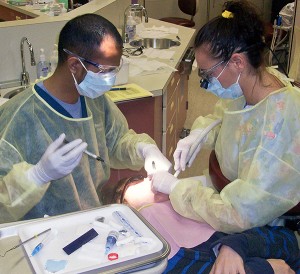 Dental sealants have been proven to protect children’s teeth from tooth decay.

Yet many states are lagging in efforts to get the quick and cost-effective treatments to poor kids who are often at the highest risk for cavities, according to a new report from the Pew Charitable Trusts.

Sealants, which are thin plastic coatings, professionally applied to the chewing surfaces of the first and second permanent molars, are most effective when they are placed soon after the teeth erupt. The procedure costs one-third of the price of filling a cavity, according to Pew.

“States are driving up health care costs for families and taxpayers by not doing enough to use dental sealants, Pew concludes in the study “States Stalled on Dental Sealant Programs.”

The report grades all 50 states and the District of Columbia on their sealant program efforts and offers an update to a 2013 look at the issue.

Since the past report card, only 12 states have improved their grades, while seven states have fallen behind. Most have failed to reach even half of 8-year-olds with this preventive service, Pew concluded.