Oregon is likely to see more heat-related deaths, and extremes in weather could create more chronic health issues and lead to more stress, the report says.
By:
Ericka Cruz Guevarra 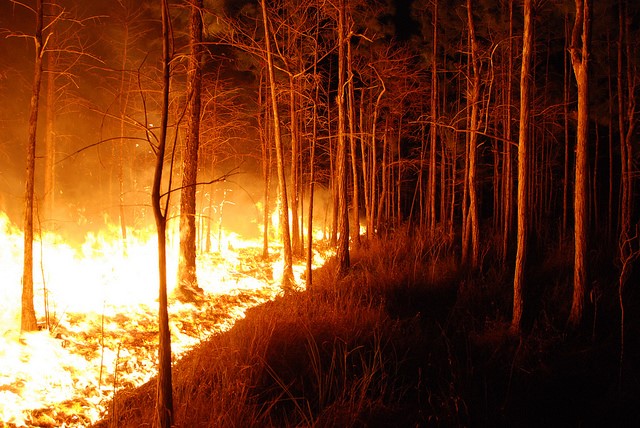 U.S. Fish and Wildlife Service/CC BY 2.0

Climate change is already having a tangible impact on the Pacific Northwest, and Oregon’s health care and social systems will likely bear a significant burden.

A new national climate change assessment report laid out the likelihood of extreme weather in Oregon, from intense wildfires to severe drought. As a result, the report predicts a strain on the state’s public health systems.

“Organizations and volunteers that make up the Northwest’s social safety net are already stretched thin with current demands,” the report says. “Health care and social systems will likely be further challenged with the increasing frequency of acute events, or when cascading events occur.”

Extreme heat also increases the likelihood of toxic algal blooms that have already made their way into at least one public drinking water system earlier this summer. It prompted the city of Salem to issue drinking water advisories. Extreme precipitation could mean more contaminants and pathogens in water runoff, which could reach drinking water systems, too.

“In addition to an increased likelihood of hazards and epidemics, disruptions in local economies and food systems are projected to result in more chronic health risks,” the report states.

Emily York, climate and health program coordinator at the Oregon Health Authority, says not all impacts to the public health system necessitate an urgent care or hospital visit. York, who helped write the Northwest section of the national climate change report, says climate change has impacts that feel less direct but can still set off a chain reaction: For example, heavy wildfire smoke affects tourism, which impacts local economies dependent on that industry.

“That could potentially translate into things like food insecurity and job loss, and all of that causes more stress and anxiety that could lead to mental health impacts,” York said. “We’re not just seeing changes in landscape, but changes in livelihoods.”

Investing in “climate mitigation” could counterbalance those risks, according to the report.

Those efforts are already underway in Oregon, according to the report and the Oregon Health Authority. Among the foundational programs of the state’s plan to modernize its public health system is one focused on environmental health. The health authority received $5 million in the 2017 legislative session to begin implementing the plan.

Oregon has some of the first local health departments in the nation to adopt local climate and health adaptation plans, according to York. Those plans exist in Multnomah, Benton, Jackson, Crook, Wasco, Gilliam and Sherman counties.

“That early work within our public health system has gotten a lot of attention because they’re a lot further along,” York said.

Not all areas of the state have those plans. Most counties only have the capacity to do the bare minimum of environmental health work like regulatory or mandated food inspections or drinking water work; they don’t convene around climate-related or environmental hazards. The five counties that are doing the latter received grant money from the Centers For Disease Control and Prevention, said Gabriela Goldfarb, environmental public health manager at OHA. The goal, however, is to expand counties’ capacity to do that on a statewide level.

“Under modernization, that’s something that we would hope to be able to do more of,” Goldfarb said. “Expertise at the state level to support expertise at the local level.”