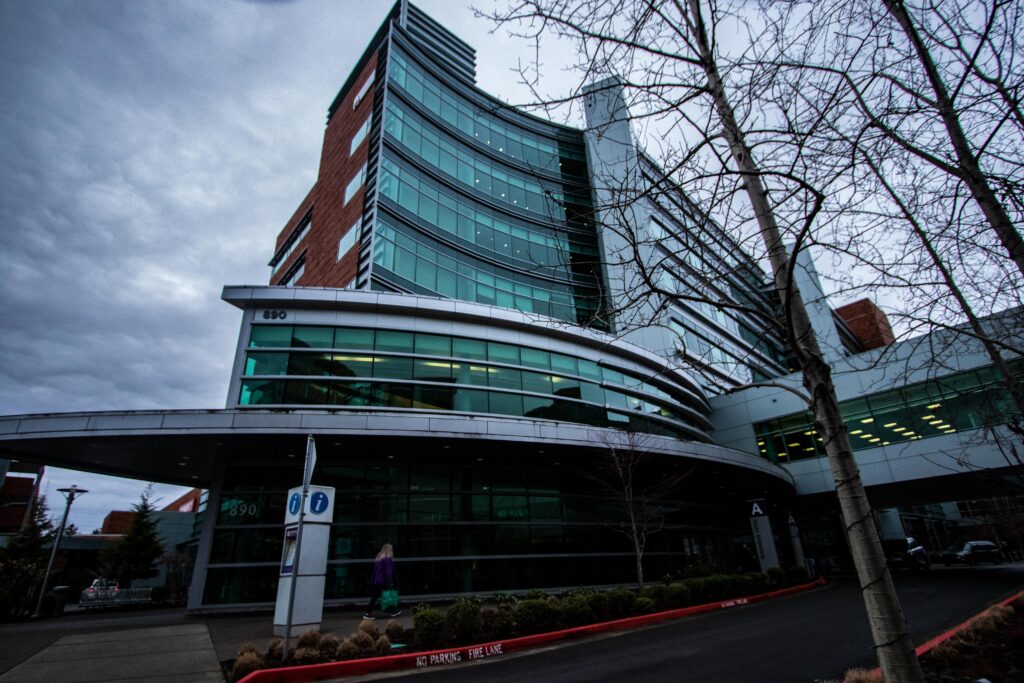 Ingrid Ulrey, a regional director of the federal Department of Health and Human Services, visited Salem Health on Thursday./Salem Reporter

A top federal health and human services official visited Oregon for the first time on Thursday and Friday, checking on the state’s response to the pandemic, behavioral health care and workforce shortages in hospitals and clinics.

Ingrid Ulrey, a regional director for the federal Department of Health and Human Services based in Seattle, was scheduled to meet with Oregon Health Authority leaders on Friday.

Though she doesn’t hand out federal dollars, she’s Oregon’s link to the federal agency which oversees crucial services for hundreds of thousands of Oregonians. About 1.4 million people in Oregon have Medicaid’s free health care coverage, for example.

“It’s really beneficial to have those strong relationships with the regional office,” said Katie Harris, director of rural health and federal policy at the Oregon Association of Hospitals and Health Systems. Harris said the regional director can smooth out tangled red tape, enabling entities in Oregon to get federal help more quickly.

Ulrey was appointed in November as head of the Health and Human Services office responsible for Washington state, Oregon, Alaska and Idaho. This is her first official visit to a state outside Washington.

Ulrey told the Capital Chronicle she’s in Oregon to see how federally supported programs are working and to talk about pressing issues, like behavioral health care, which President Joe Biden recently named as a priority.

“There was a call out to really focus on the mental health of the nation, to move away from stigma and improve access to quality integrated services,” Ulrey said, and “make it easier for people to find out where they can get help.”

State officials are preparing for the launch of a national crisis number to be launched in July.

Oregon has failed to meet the mental health needs in the state. National surveys consistently rank the state at or near the bottom of providing access to mental health and addiction services and at the top or near the top in need.

Ulrey said it would help to integrate “behavioral health into the health system so that primary care practices have a partnership with behavioral health agencies and automatically refer people.” She also said enough mental health support in schools is important.

Over the past two sessions, the Legislature has allocated more than $500 million for mental health and addiction services but much of that money has not yet been spent.

A big problem for mental health and addiction providers is finding staff.

“Many states are taking different approaches to attract more people to work in the field of mental health and substance use disorder because like everything in the economy right now, there’s a severe workforce shortage,” Ulrey said.

Providers say the rates paid by the Oregon Health Authority are too low. In response to a similar problem in Washington state, lawmakers there recently approved a 7% hike in payments to providers, Ulrey said. Before taking her current position, she served for five years as the public health policy director for Seattle and King County.

Another problem that Oregon faces is the end to the pandemic – the “great unwinding.” Up to 300,000 Oregonians are at risk of losing health coverage that the state and federal governments covered temporarily during the pandemic.

Oregon officials intend to design a new plan to cover tens of thousands of them, but that will require federal approval and funding.

“There’s a whole process of ensuring that that doesn’t have any negative impacts,” Ulrey said.  “Oregon has a very strong plan to ensure they’ll be able to do the very best to reach everyone, let them know if they are still eligible or if not what they would be eligible for instead and make sure to mitigate as much as possible the loss of health insurance coverage.”

On Thursday, Ulrey visited Salem Health, which launched the first mass vaccination site in the state, and she met with leaders at the Oregon Association of Hospitals and Health Systems. She said one issue covered was the “boarding” problem, with people stuck in the hospital awaiting discharge because they have nowhere to go. Although hospitals have far fewer people with COVID in beds, and intensive care units are no longer jammed, boarding continues.

“We still have almost 600 people who are discharged-delayed or boarding – that’s a lot,” said David Northfield, spokesman for the hospital association.

Lisa Wood, spokeswoman for Salem Health, said it is a pressing issue.

“These are ongoing issues that Oregon and the nation must address, and we look forward to partnering with Director Ulrey and the Department of Health and Human Services on solutions to better serve our community,” Wood said in a statement.

There aren’t enough lower-level care facilities, like long-term care homes or rehabilitation services. They, too, are strapped for staff.

The health authority propped up health care facilities during the pandemic by paying millions of dollars to hire temporary professionals. Harris said hospitals have been preparing for weeks for the end of those contracts on Thursday. The National Guard also helped out. Their mission ends Thursday as well.

Friday’s conversation with Patrick Allen, director of the Oregon Health Authority, was planned to be wide-ranging, the agency said.

“We’re looking forward to discussing important health issues and priorities for people in our state, including Medicaid, behavioral health and pandemic funding,” said spokesman Jonathan Modie. He did not provide details.

Ulrey also planned to visit Oregon Health & Human Services to see the Northwest Native American Center for Excellence. The center, which received $800,000 in the recent federal budget signed by Biden, aims to train more Native Americans in the medical profession.