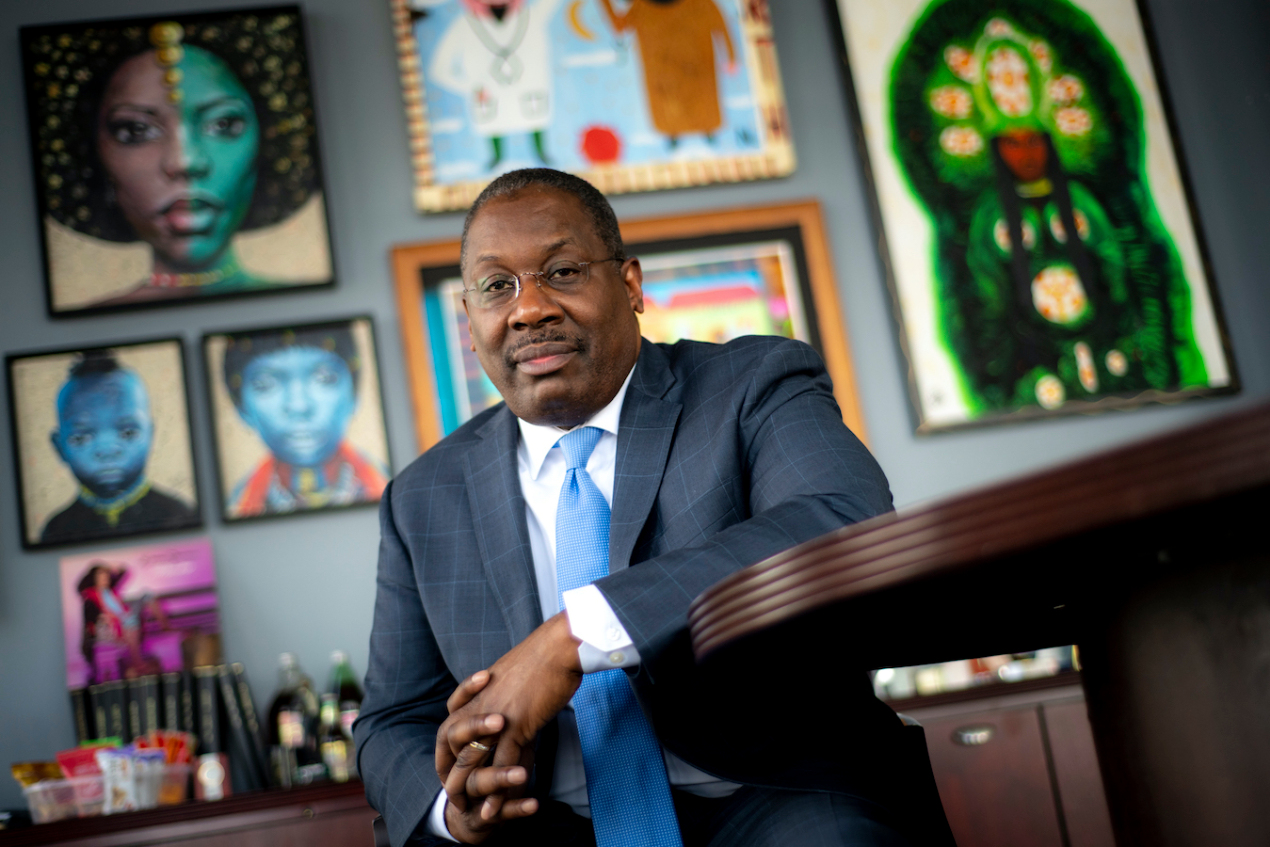 In a white-dominated society, Black men are less likely to have family members with high incomes or social and business connections who can open doors for them, says Thomas LaVeist, a sociologist and dean of the school of public health at Tulane University./Paula Burch-Celentano/Tulane University

More education typically leads to better health, yet Black men in the U.S. are not getting the same benefit as other groups, research suggests.

The reasons for the gap are vexing, experts said, but may provide an important window into unique challenges faced by Black men as they try to gain not only good health but also an equal footing in the U.S.

Generally, higher education means better-paying jobs and health insurance, healthier behaviors and longer lives. This is true across many demographic groups. And studies show life expectancy is higher for educated Black men — those with a college degree or higher — compared with those who have not finished high school.

But the increase is not as big as it is for whites. This comes on top of the many health obstacles Black men already face. They are more likely to die from chronic illnesses like cardiovascular disease, diabetes and cancer than white men, and their life expectancy, on average, is lower. Experts point to a variety of factors that might play a role, but many said the most pervasive is racism.

Researchers note that Black women face many of the same challenges as Black men, but Black women generally have a longer life expectancy than Black men. (They also point out that it is hard to draw conclusions about Hispanic residents because of a lack of studies on the issues.) As a result, many experts said that the health problems stem from a persistent devaluation of Black men in U.S. society.

“At every level of income and education, there is still an effect of race,” said David Williams, a professor of public health at Harvard University who developed a scale nearly 30 years ago that quantified the connection between racism and health.

The precise difference in health gains between educated white men and educated Black men is hard to pinpoint because of differences in study designs. Some studies, for example, look at life expectancy, while others look at disease burden or depression.

In addition, other research shows how that gap plays out. A 2019 study examined years of “lost life” — years cut off because of health challenges — between the groups. Educated Black men lost 12.09 years, while educated white men lost 8.34 years, according to the study, published in the Journal of Health and Social Behavior.

“No matter how far you go in school, no matter what you accomplish, you’re still a Black man,” said Derek Novacek, who has a doctorate in clinical psychology from Emory University and is researching Black-white health disparities at UCLA.

S. Jay Olshansky, a professor of epidemiology and biostatistics at the University of Illinois in Chicago and lead author of the 2012 study, said possible risk factors for various diseases and environmental issues could also play a role: “I’d be very surprised if this wasn’t part of the equation. The risk of diabetes and obesity is much higher among the Black population, even those that are highly educated.”

Among other possible causes that researchers are probing are stress and depression.

“When you follow other groups, with more education depression declines,” said Dr. Shervin Assari, associate professor of medicine at Charles R. Drew University of Medicine and Science in Los Angeles County, California, who studies race, gender and health. “But when you look at Black men — guess what? Depression goes up.”

Depression is often an indicator of physical well-being as well as a contributing factor to many chronic illnesses, such as hypertension, obesity and diabetes.

Isolated at Home and Work

Researchers who study the health of various racial and ethnic groups, as well as the social factors that influence health outcomes, see cause for concern. The findings suggest that the power of discrimination to harm Black men’s lives may be more persistent than previously understood. And they could mean that improving Black men’s health may be more complicated than previously believed.

“What has surprised me is how powerfully and consistently discrimination predicts poor health,” said Williams.

COVID-19 has underscored the issue. As early as last April researchers noticed higher death and hospitalization rates for Black people. The patterns have persisted, with Black patients being nearly two times as likely as whites to die of the virus and Black men have the highest rates of COVID deaths.

The COVID outcomes, Williams and others suggested, helped point out that the health and well-being of middle-class, educated Black men have been overlooked.

Higher education hasn’t brought about the health equity many experts had expected. While Black men have worse health than other groups if they are not educated, they can’t catch up to their white peers even when they are.

“What society has done to Black men is to corner them,” Assari said.

Black men, even with an education, have less of a financial and social safety net than white men. That brings added stress, the experts said. Also, as Black men climb a corporate, academic or managerial ladder, many feel isolated. And social isolation harms health.

Thomas LaVeist, a sociologist and dean of the school of public health at Tulane University, said that in a white-dominated society Black men are less likely to have family members with high incomes or social and business connections who can open doors for them. And once hired into the workplace, they are less likely to have mentors, LaVeist said, and that lack of connections is associated with stress, depression and other factors that can lead to poorer health.

“There needs to be a designated effort to provide an on-ramp” for Black men, he said.

And they may have experienced more cumulative adversity and continued racism.

“Your high socioeconomic status doesn’t protect you from the impact or from the incidence” of racism, said Dr. Adrian Tyndall, associate vice president for strategic and academic affairs at University of Florida Health.

“That is difficult,” added Tyndall, who is Black. “If I were to walk out of this institution and into the community, where people don’t know me, I could be called the N-word. And yeah, that’s pretty depressing.”

The Need to Prove Yourself

The cumulative effect of discrimination takes a toll psychologically and physiologically — but so does the anticipation of it.

“It’s not just the actual exposure in dealing with these kinds of experiences, but it’s ‘What do you do before leaving home?’ You’re careful about your dress, your behavior, the way you look because of the threat of discrimination, and so you react,” said Williams, the Harvard professor.

For example, when Williams, who is Black, first became a professor at Yale University, he wore a coat and tie every day. No one else in his department did that. And yet, he said, he kept up the practice for years.

LaVeist remembers getting onto an elevator at an academic medical center around 1990, shortly after earning his Ph.D., and a passenger wearing a white coat — presumably a doctor — assumed LaVeist worked in housekeeping. The man asked LaVeist, who was dressed in a suit, to clean up a spill on the sixth floor.

“When I told him that I was a professor, he didn’t speak,” said LaVeist. “He simply didn’t speak.”

Greg Pennington, 67, of Atlanta, has a doctorate in clinical psychology from the University of North Carolina and an undergraduate degree from Harvard, owns a professional consulting firm and has worked with hundreds of men individually as well as dozens of Fortune 500 companies. “It’s not so much that [Black men] experience discrimination and depression ‘even after’ they have advanced degrees,” he said. “It’s more descriptive to say ‘throughout the whole process.’”

Despite their academic credentials, Black men said, they often feel they need to prove themselves, which adds another layer of stress.

“It’s almost like I can’t fail; I’m representative of other Black males,” said Woodrow W. Winchester III, director of professional engineering programs at the University of Maryland-Baltimore County. “Your value and your success are around advancing the collective.”

The bottom line, experts agreed, is that discrimination has a lingering effect on health.

Dana Goldman, director of the USC Schaeffer Center for Health Policy and Economics, was co-author of the 2012 Health Affairs study on these chasms. Goldman said he agrees that the underlying cause is racism and added that he thinks one solution is to improve education. He and others suggested that schools, starting in the lower grades, need to provide Black students with more culturally appropriate curricula that bolster their self-image and help build social relationships between white and Black youngsters. Those efforts need to continue as students progress into higher education.

“The policy remedy is not just less racism but to improve the quality of our schools, occupational safety and public health,” Goldman said.

Others agree that the findings suggest a need to reconsider broad policy changes — in education, housing and the justice system — so that Black males feel confident and supported in pursuing better educations and jobs.

It will be a long-term project, said Williams, the Harvard professor.

“We need a Marshall Plan for all disenfranchised Americans,” he said, but one that especially addresses implicit biases and how American society views and treats Black males.