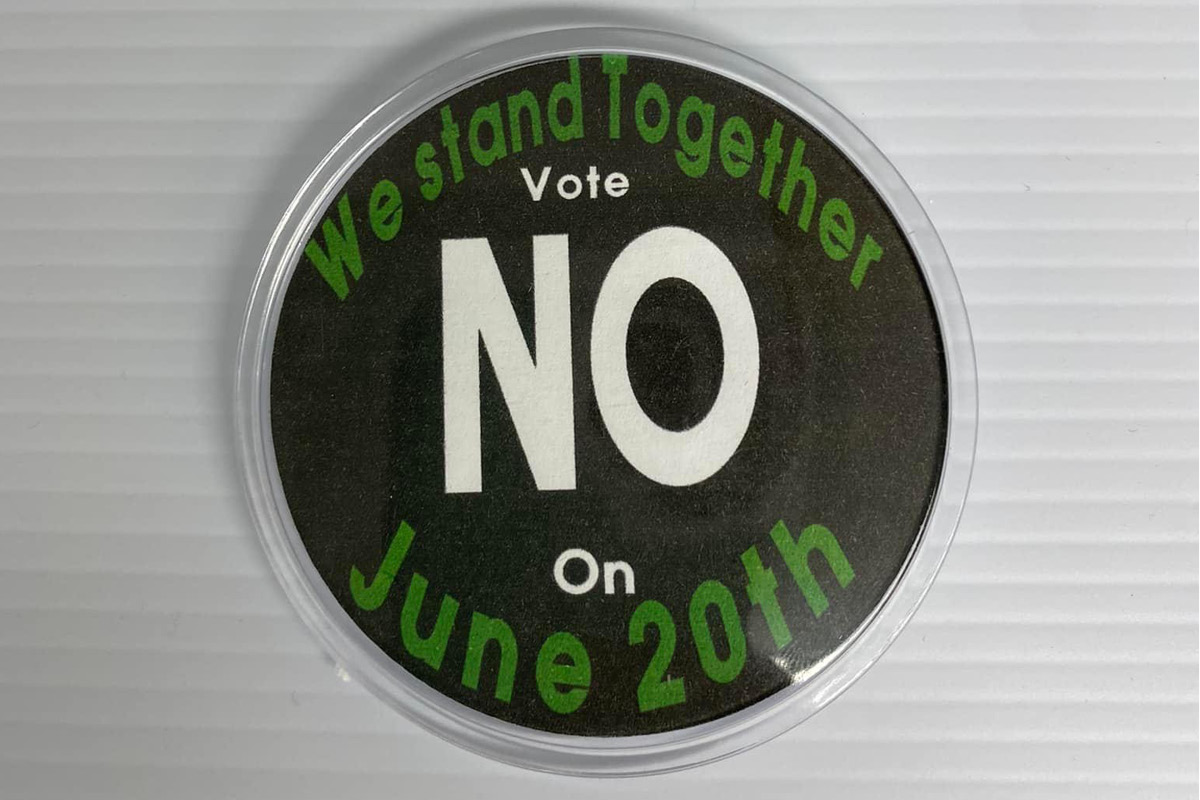 Pins such as this are being circulated among nurses at Providence St. Vincent Medical Center in Portland./Courtesy photo

(This article has been expanded to incorporate additional reporting)

Some nurses within the 1,600-person workforce of Providence St. Vincent Medical Center in Portland are urging their colleagues to vote against a proposed labor contract, saying it won’t guarantee safe staffing or provide competitive wages.

Despite the union bargaining team for the hospital’s nurses having negotiated the deal, it still must be approved by the union’s members. And it appears that many nurses are organizing to reject it. They have been vocal on social media, are posting fliers on bulletin boards, and plan to wear “vote no” buttons before the June 20 vote. 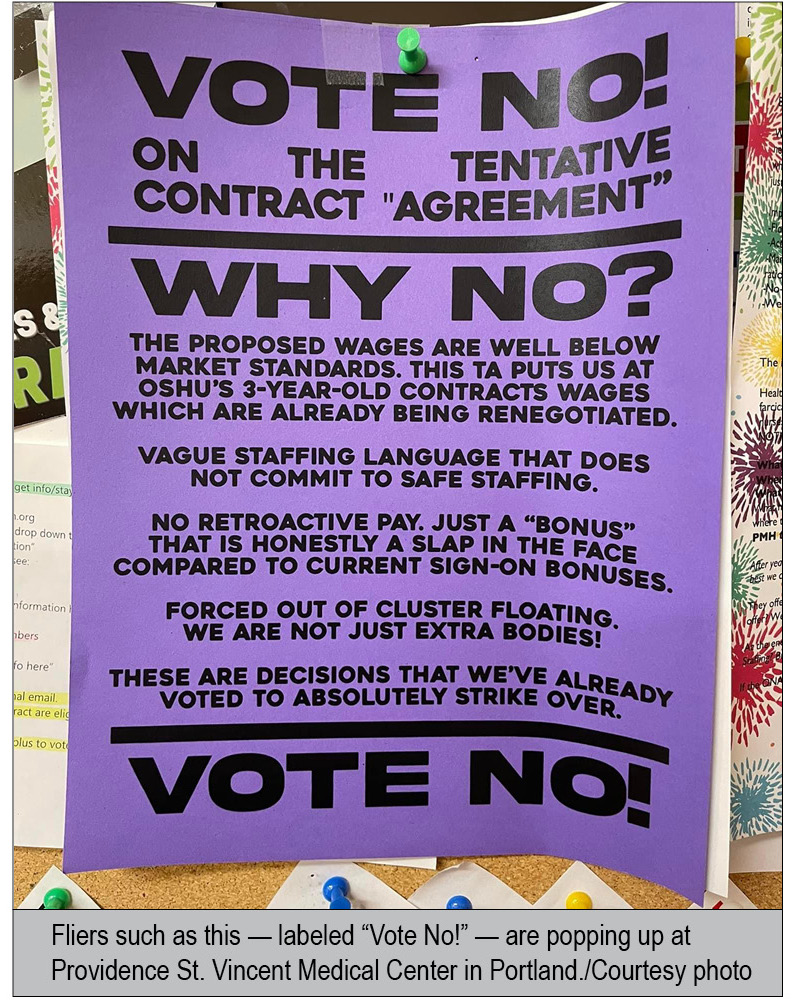 If nurses reject the offer, it could derail hospital management’s efforts to avoid a labor strike.

The hospital made the offer after nurses in May voted to authorize a strike if necessary, citing a lack of progress at the bargaining table. Nurses would end the threat of a strike if they accepted the tentative offer.

In interviews with The Lund Report, two nurses said they plan to reject the contract proposal at the ballot box. They say Providence’s offer does not go far enough in guaranteeing sufficient staffing and wages that are on par with other hospitals.

“The nurses are frustrated and what we are seeing is a bunch of empty promises and no real commitment to doing the right thing,” Angela Knapp, a registered nurse at the hospital, said in a message to The Lund Report. “The (offer) may look good on the news for Providence but the majority of us are uniting together to vote it down. We don’t feel Providence has bargained fairly. This is the first time they made any significant movement on anything. It’s a good start, but after seven months of negotiations, it shouldn’t be the first time they moved and they haven’t even come close to addressing the real concerns.”

It also contained a quote from ONA Executive Committee President at Providence St. Vincent Medical Center, registered nurse John Smeltzer, saying “This agreement addresses our patients’ needs and gives us a viable way to recruit and retain the nurses our community counts on. Now it’s up to Providence and nurses to honor the agreements we’ve made and make Providence St. Vincent the hospital we know it can be.”

Given the size of the workforce, it’s difficult to predict how the vote will turn out. But anecdotally, evidence is building up of a groundswell of resistance within the hospital’s rank-and-file nurses.

Fliers labeled “Vote No!” are popping up in the hospital. An unofficial online poll in a private Facebook group showed 94% of nurses didn’t support it, with 268 participants. Only 1% supported the offer, with the remaining 5% undecided. A screengrab of the poll was shared with The Lund Report. 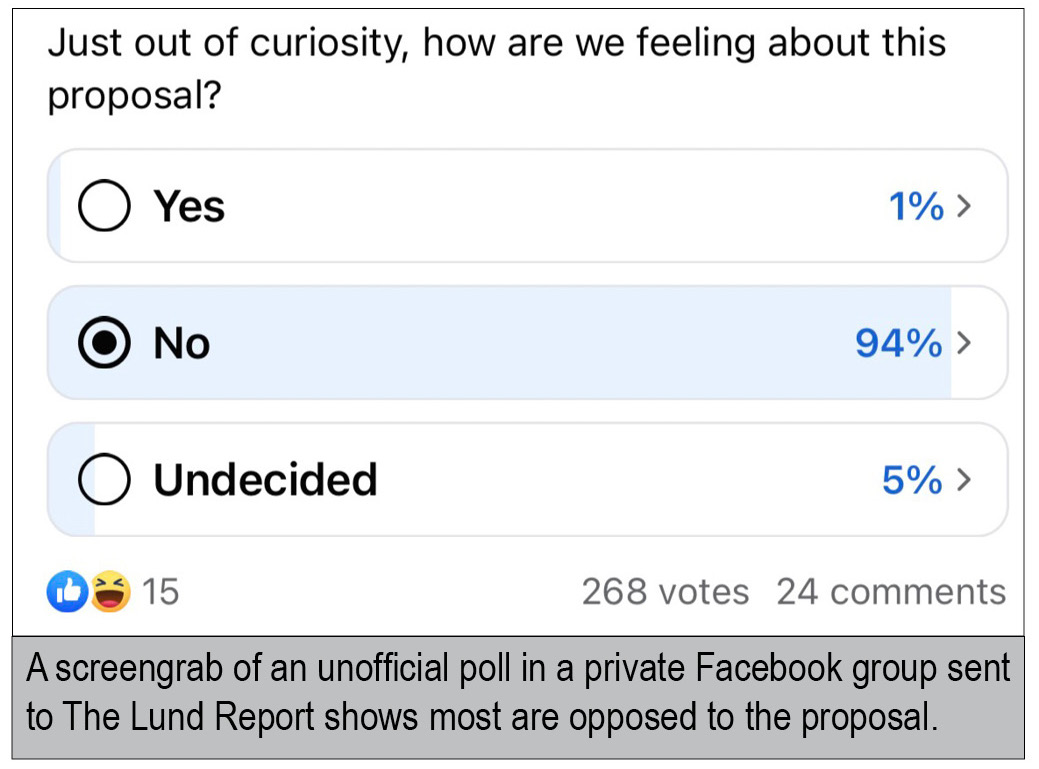 The stakes are high. Nurses at this hospital — and two other Providence hospitals in Milwaukie and Oregon City — have authorized Oregon Nurses Association leaders to call a strike if they cannot reach a labor contract. Each hospital bargains and votes on a separate contract, which means one hospital could go on strike but not the others. Combined, the three hospitals have a workforce of about 2,000 nurses who could go on strike. A new contract for Providence St. Vincent nurses would eliminate the largest piece of a potentially coordinated strike at three hospitals.

The bargaining team for the hospital’s nurses’ union continues to recommend that nurses vote in favor of the proposal, according to Kevin Mealy, a spokesperson from the Oregon Nurses Association. He didn’t have any comment on how receptive nurses are to the negotiated proposal.

Jean Marks, a spokesperson for Providence, said: "Working with a federal mediator and after nearly 8 months, we’ve reached tentative agreement with ONA on a comprehensive package that addresses the important issues raised at the bargaining table. The package has the full support of both negotiating teams and the union recommends its members vote 'yes' to ratify the agreement. We look forward to a ratified contract to get our valued nurses the wage increases and contract enhancements they deserve."

A summary of the proposal shared with nurses includes the following details:

The proposal is unacceptable because it has “vague language” that Providence managers “can't really be held accountable to keep,” said one nurse at the hospital, who spoke on condition of anonymity with The Lund Report to avoid retaliation.

“People are pretty upset about it and feel like Providence can and should do better for the nurses and for the patients,” the nurse said.

The conflict over the tentative agreement is about more than pay. For example, the nurse said the proposal does not do enough to ensure nurses have enough support to go on breaks. The proposal would start a pilot program in five hospital units to support nurses. But there’s no guarantee the pilot will continue, the nurse said.

“There are units in the hospital that the nurses have to take on double the patient load in order for anybody else to get a break,” the nurse said in an interview. “So there's nobody to cover the breaks of the nurses. It puts them into an unsafe situation to take their breaks. Because you're overloading one nurse, and it leaves the patients vulnerable to being less closely monitored.”

As for salaries, one sticking point is that the wage increases would not be retroactive, even though negotiations have dragged out since December, the nurse said.

Jun 9 2022
News source:
The Lund Report
Keywords:
providence, labor, nurses
×
This article is for premium subscribers. If you are one, please sign in below.
You can see two more premium stories for free. To subscribe, click here. We depend on premium subscriptions to survive, and they are tax deductible.
Sign InGo Premium Not now