Priciest New Drug In Oregon Rings In At $419,500 Per Infusion 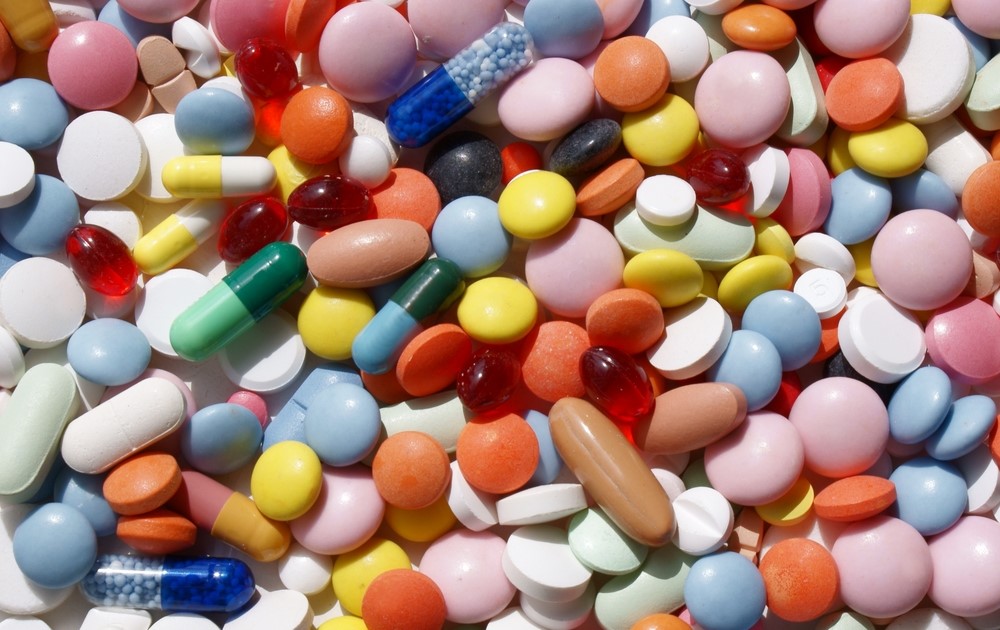 Joan Morgan’s father faced a $10,000 a month price tag for a drug to keep him alive after he was found to suffer from a rare genetic mutation, she told Oregon regulators on Wednesday.

But that figure pales in comparison to other high-cost drugs detailed in a new state report previewed at the hearing, which was held by the state’s Prescription Drug Price Transparency Program.

Genetic therapies from the global biopharmaceutical company Bristol-Myers Squibb topped the list of pricey new drugs reported to the program, which was created by the Legislature in 2018 to increase transparency around drug costs. The 2021 report draws from data collected since the program's last annual report was released in October 2020.

Abecma was the most expensive at $419,500 for a single infusion, made from a patient’s own immune cells, followed by Breyanzi at $410,300 for the one-time treatment. Both are CAR-T (chimeric antigen receptor T-cell) therapies used to treat certain types of cancer.

In the past year, Oregonians spent more on Humira than any other drug, with the 10 insurers that report to the program indicating that  $93.5 million was paid for 19,225 prescriptions. It’s the third year in a row that the drug, used to treat rheumatoid arthritis and ulcerative colitis, has topped the list. A 7.4% price increase for the drug earlier this year has led to $1.4 billion more in spending in the U.S.

These highlights from the Prescription Drug Price Transparency Program’s 2021

annual report were shared during the program’s third annual public hearing, held virtually on Wednesday, Dec. 8. The report itself is slated for release on or before Dec. 15.

The program was established under the Prescription Drug Price Transparency Act in 2018. It was intended to be a first step toward combating sky-high drug prices and spending.

Companies are required to report new drugs and price increases of existing drugs to the program, which is run by Oregon’s Department of Consumer and Business Services. That applies when the list price meets certain price thresholds: when the price increase by more than $100 a month (if that equates to more than a 10% increase over the previous year) and when they introduce a new drug that is priced at more than $670 a month, which is the threshold for the specialty tier of Medicare Part D, which covers drug costs.

So far, 193 new high-cost drugs have been reported to the program this year. The majority, at 63%, are generic, and 41 of the reported drugs are antineoplastics and adjunctive therapies — in simpler terms, cancer treatments.

“This is continuing the trend that most of the highest cost drugs that we see tend to be for cancer, or for other sort of difficult to treat disease states that don’t have a lot of treatments out there for them already,” Numi Lee Griffith, senior policy advisor for the Division of Financial Regulation, said during the hearing. “And they tend to be biologics.”

She explained biologics are large molecule drugs produced inside living cells, as opposed to small molecule drugs, created with chemical processes in a laboratory.

The Food and Drug Administration reported that price transparency program’s list topper, Abecma, is the first cell-based gene therapy it has approved for the treatment of multiple myeloma, a cancer that forms in plasma cells.

“Each dose of Abecma is a customized treatment created by using a patient’s own T-cells, which are a type of white blood cell, to help fight the myeloma,” stated a release from the FDA. “The patient’s T-cells are collected and genetically modified to include a new gene that facilitates targeting and killing myeloma cells. Once the cells are modified, they are infused back into the patient.”

The greatest price increase reported to the state program was from Nostrum Laboratories for a generic drug that saw a hike of 778%. The average cost increase was 27% for generics and 13% for brand-name drugs.

Public testimony from AARP Oregon, OSPIRG and others during the hearing applauded the program’s efforts but agreed more still must be done to rein-in drug costs.

Morgan shared with panelists how her father was told to get his affairs in order after it was discovered he suffers from a rare gene mutation. Her family was relieved when his oncologist told them a new drug could save his life. But it came with a price tag of $4,000 a month. They “liquidated assets” and took other measures to pay for it. The following year, that price tag rose to $10,000 a month, for the same drug. She said her dad is alive because her sister purchases the drug in Holland, where it costs less than $300 a month, and flies it to the U.S. multiple times a year.

Griffith, who served as the program's coordinator in the past, noted in her presentation that the number of significant price increases is trending down, but the average launch price of new drugs is simultaneously rising.

“What this really suggests is a change in behavior from manufacturers, that rather than increasing prices throughout lifespan of a drug, they’re building all of that all their profit pulls into the beginning of the life cycle,” she said. This way they have fewer and smaller price increases later on, “which allows them to not send reports to programs like ours,” she said. Fifteen states have drug price reporting programs similar to Oregon’s.

“When a drug is purchased through Medicaid, the manufacturer is required to give an automatic rebate that basically locks the price to the rate of inflation,” she said. “That kind of gives an incentive for drug companies to just price real high and avoid those price increases, because they won't be able to reap profits through Medicaid for price increases because of the rebate program.”

Earlier this year, The Lund Report found that loopholes and a lack of staffing have hampered the impact of the price transparency program. Pricing strategies that can drive the increases are often shielded from scrutiny in the name of “trade secrets,” with the onus placed on the state to prove otherwise. Doing so has been a challenge given the program’s small staff and the large volume of reports it must process, making publicly viewable information within the program’s database sparse.

Antonio Vargas, a research analyst for the program, said during the hearing that staff has been busy getting more information inputted into the online database where the public can view any report listed with a status of “Filing Complete.”

“This is a major milestone of the program,” he said. In an example of a viewable drug report in the database that Vargas showed during the hearing, the manufacturer had marked that its marketing data was a trade secret, however the information was disclosed.

“You can see the original or redacted data depending on the department’s determination to disclose or not disclose it,” Vargas said. Program staff included an explanation of the disclosure in the example.

The program also collects financial information from drug companies relating to four direct costs related to a drug: marketing, safety and effectiveness research, distribution and manufacturing. Both generic and brand-name drug makers report manufacturing as the largest expense. Marketing comprised 20% of the pie for brand-name drugs.

Whether the transparency programs in Oregon and other states have impacted drug prices is up for debate. Prices increases began to fall a year before Oregon’s — the first in the nation — was implemented. Griffith said Medicaid rebate programs, as well as public pressure to avoid steep price increases after stories of gouging made headlines, contributed to decrease. “So you can't say the transparency was the cause of that particular change in behavior,” she said.

Rep. Rachel Prusak, D-Tualatin, who is chair of House Interim Committee On Health Care and a family nurse practitioner, chimed in following Griffith’s presentation. She said while she was listening to the heating, she received a message from patient’s family member who was concerned because Victoza, a diabetes drug, is priced at $3,300 and will be a $600 copay to the patient. 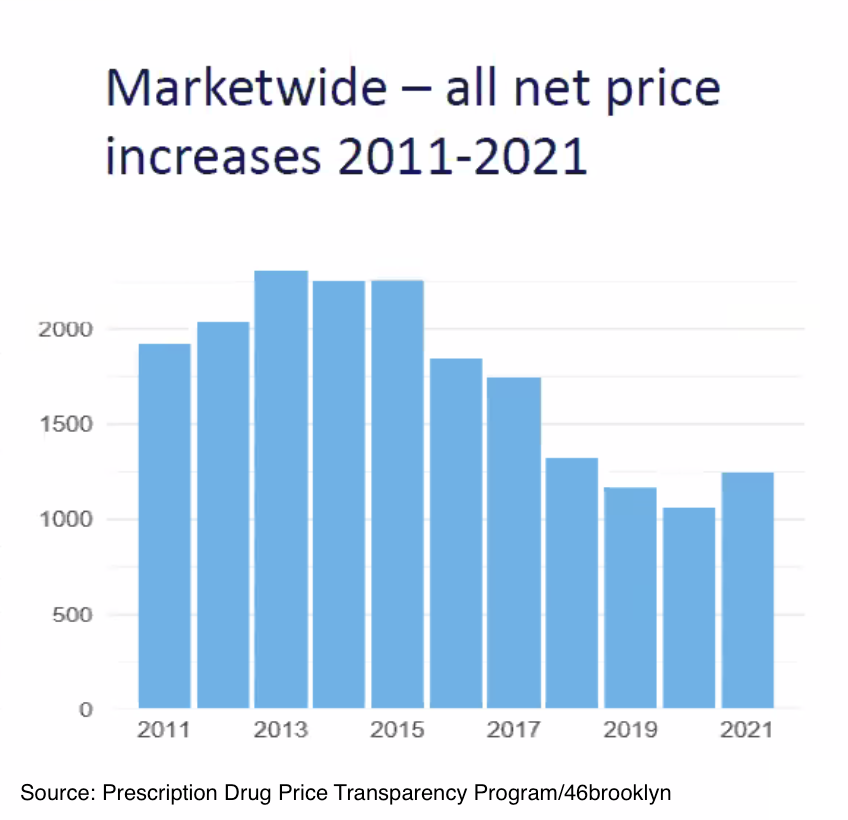 “What Rep. Prusak just said really underlines what I'm hoping to highlight, said Bandana Shrestha, speaking on behalf of AARP Oregon. “Our members, and I would say all Oregonians, are really sick and tired of paying highest drug prices in the world for critically needed medication. We pay three times what other countries pay for brand-name drugs.”

To demonstrate her point she pointed to a popular drug that can be prescribed to work with chemotherapy.

You can reach Emily Green at [email protected] or on Twitter at @GreenWrites.

Dec 8 2021
News source:
The Lund Report
Keywords:
drug prices, price transparency, Oregon
×
This article is for premium subscribers. If you are one, please sign in below.
You can see two more premium stories for free. To subscribe, click here. We depend on premium subscriptions to survive, and they are tax deductible.
Sign InGo Premium Not now