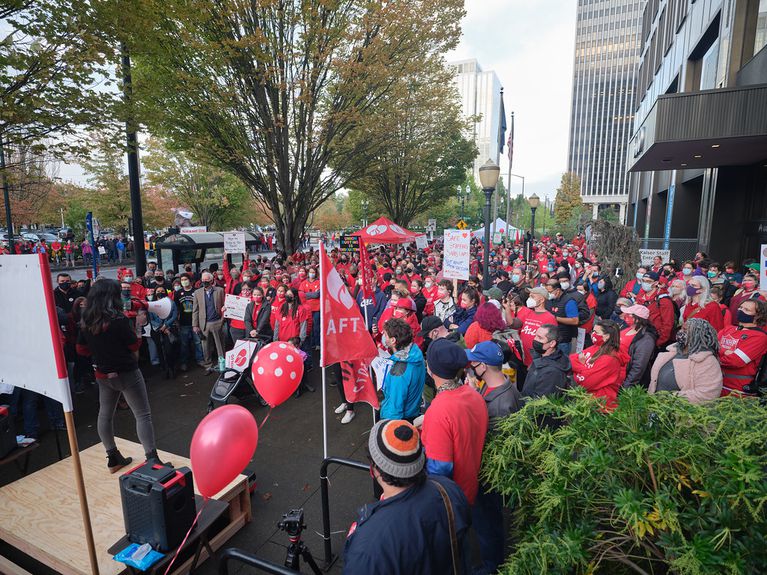 The Oregon Federation of Nurses and Health Professionals held a rally on Sept. 28 to urge support for what the union calls safe staffing./Tim Trautmann/OPB

Thousands of Kaiser Permanente health care workers are a step closer to going on strike.

The vast majority of members of the Oregon Federation of Nurses and Health Professionals union voted to authorize the action in balloting over the last few days. The vote doesn’t mean there’ll definitely be a strike. But the union can now declare one. And it can tell Kaiser administrators on the other side of the bargaining table that 96% of union members who voted support a strike. 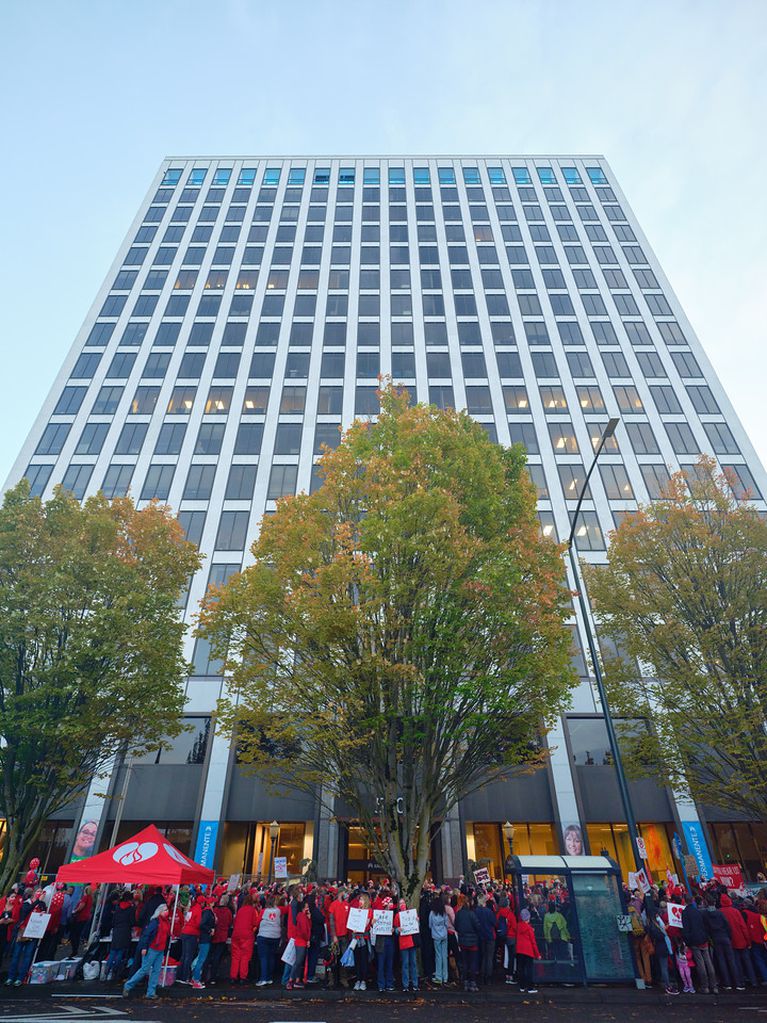 “What happens here in this fight here in Oregon, and in the other unionized states, is in effect going to have large scale ramifications for our public health system,” Burley said.

Oregon union members are coordinating with unionized Kaiser health care workers in eight states, who collectively comprise a workforce of 52,000 people. The Oregon local chapter has been working without a contract since Sept. 30.

“Our members turned out in record numbers to say that they are willing to do what it takes to save patient care in Oregon,” said Jodi Barschow, a Kaiser Sunnyside RN and president of the Oregon Federation of Nurses and Health Professionals.

“Kaiser’s proposals would be a disaster for Oregon’s entire care system and show a profound disrespect for the frontline healthcare workers who are risking their lives during COVID.”

A statement from Kaiser management said the nonprofit will continue negotiating, and that in the event of a strike, its facilities will remain open using physicians, managers and contingency staff.

“Our history and our future are deeply connected to organized labor and labor unions have always played an important role in our efforts to give more people access to high-quality care and make care more affordable,” Kaiser’s senior vice president of human resources, Arlene Peasnall, said in a statement.

“A strike authorization does not automatically trigger a strike. Unions are required to provide us with a 10-day notification before any work stoppage could commence,” she said. “We strongly believe that differences in bargaining are best worked out at the bargaining table, and we have a 24-year history of union partnership which proves that point.”

The Oregon Nurses Association, a separate union with more than 15,000 nurses among its membership, also issued a statement supporting the Oregon Federation of Nurses and Health Professionals. ONA said the Kaiser workers are fighting for safe staffing and quality patient care.

“In a recent survey, more than 42% of Kaiser’s nurses and other healthcare professionals indicated they are considering leaving the healthcare workforce because of the treatment they have received at Kaiser. These numbers support ONA’s position that Oregon’s healthcare system is facing an existential crisis; one that has been exacerbated by the COVID-19 pandemic but which was caused by decades of failures by hospital systems like Kaiser,” the statement said.

The ONA statement notes that the strike authorization vote from Kaiser workers is part of a multi-state effort across five states, involving tens of thousands of health care workers.