Portlanders Take Time to Talk About – And Plan for – Death

Death cafes – informal but directed gatherings to talk about grief, loss and end-of-life planning – are part of an international movement to improve care and address life's toughest topics
By:
Christen McCurdy 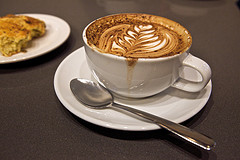 Coffee, cake and frank talk about death might not sound like a formula for a popular social event.

But for organizers of “death cafes” unstructured conversations about end-of-life issues – that simple formula has brought in capacity crowds in the U.S. and Europe, including Portland.

A Sunday night death cafe at the Q Center, intended to address end-of-life issues affecting LGBT people, reached its registration capacity of 90 shortly after it was announced. Two more are coming up this month, organizer Holly Pruett said – one at Friendly House, a community center in Northwest Portland, and one at the First Unitarian Church.

Portland's death cafes are part of an international movement, which started three years ago in England, with organizers saying they felt death had been “outsourced” to the medical profession and the funeral industry and wanted to create a welcoming space to discuss grief-and-loss, as well as end-of-life wishes and planning.

Pruett is a trained funeral officiant and heard about death cafes from a mentor shortly after the first one was held in London. By the time Pruett started working to organize death cafes in Portland last year, more than 100 people responded to the invite, though the event had not been advertised or covered in the local media. People had read about events in other places, and searched the Internet to see if there was something similar in Portland, she said, bringing them to the PDX Death Cafe Facebook page.

“We have really been trying to expand efforts in the community to see more of them offered,” Pruett said, since interest and turnout continue to grow.

The website for the international Death Cafe movement – deathcafe.com – specifies that the events must always take place in an accessible, respectful, confidential setting, must operate on a not for profit basis and not lead participants to any conclusion, product or course of action.

Beyond those requirements – and a fourth recommending refreshments be served – death cafes are open-ended events and have included gallery shows, storytelling hours and may in the future include film screenings or assistance with advance directives.

“We typically have sample discussion topics, or just conversation starters on the table,” Pruett said. Participants might be asked about their beliefs regarding death and how they formed them, they might be invited to talk about what they would like to have happen to their bodies when they die. Participants may also decide to talk about lost loved ones, or grief they are carrying.

In addition to the cafes organized by Pruett, organizers at TaborSpace – a nonprofit community gathering space operating with the Mt. Tabor Presbyterian Church have held two death cafe events. And the Death Cafe website announces upcoming events all over the world – from Amsterdam to Auckland.

Pruett tracks the ages of those come to death cafes and noted the events are surprisingly multi-generational. While the majority of participants are in their fifties, sixties and seventies – and may be caring for aging family members, grieving loved ones or interested in starting their own end-of-life planning – there has been a strong showing of younger people at the events, Pruett said. She did say the majority of participants – between two-thirds and three-quarters – are women.

Death Cafe organizers are now talking about a multiday conference to take place in 2015. The popularity of the events has “just been amazing to me,” Pruett said.

The popularity of the events may suggest a groundswell of interest in frank talk about death and end-of-life planning. Harriet Warshaw, executive director of the Boston-based Conversation Project, a nonprofit devoted to encouraging families to talk about end-of-life issues “at the kitchen table and not in the ICU,” likened it to the 1970s movement to make hospital births more comfortable for women and more welcoming toward their partners and families.

The Conversation Project was founded was founded two years ago after syndicated op-ed columnist Ellen Goodman lost her mother and became concerned about the care she'd received.

“Ellen's mom was not able to share with her what kind of care she would have wanted,” Warshaw said, because her capacity was reduced due to illness. Goodman eventually reached out to her mother's physician, and to experts all over the country to talk about how to make sure patients die the way they want to.

Former Centers for Medicare and Medicaid Services director Don Berwick advised Goodman that it would take a consumer movement – not a provider movement – to make a real change in how patients are cared for at the end of their lives.

“From that concept the Conversation Project was born as a public engagement, consumer engagement initiative,” Warshaw said, likening it to the cultural shift around childbirth in the 1970s. The Conversation Project publishes kits for starting conversations about planning for death, and the organization also avoids making any specific recommendations or pushing a specific point of view,. “It was about what kind of care was important to us at the end of our lives. It’s values driven. We don't have an opinion on what kind of care you should have. People's wishes are expressed and respected.”

Most patients don't die the way they want to: seven of 10 Americans say they'd like to die at home, but the same percentage of American ends up dying in a hospital, nursing home or assisted living facility.

Compassion & Choices – which advocates for end-of-life choice and palliative care options – has end-of-life planning forms available on its website, and has also published a Patient Medical Notebook to record notes from doctor visits. West said she was inspired to create the notebook during her mother's illness, to ensure ease of communication with her sister – and aid her own memory, which had faltered due to the stress of the situation.

“I'd get home and call my sister to tell her what happened at the appointment, and say, 'I have no idea,'” said West, a former environmental lawyer who took the helm of the organization last year. The notebook also includes space for patients to communicate their wishes for their medical care.

Compassion & Choices also has consultants who can walk patients through end-of-life planning issues – because while having the documents is important, it's also critical to make sure family members and providers have such information. (West suggested placing paperwork on the refrigerator, where it can easily be found in an emergency.)

West said staff from her organization have been in contact with Death Cafe organizers, and will also be partnering with The Conversation Project next spring to promote National Healthcare Decisions Day – April 16, 2015 – to raise awareness about end-of-life issues. The idea behind these events is consistently to make sure people “get what they want, instead of getting on the conveyor belt,” West said. The way to do it is to set aside time to make decisions and communicate them to providers and loved ones.

Image for this story by Christopher Cotrell (CC BY-NC-SA 2.0) via Flickr.