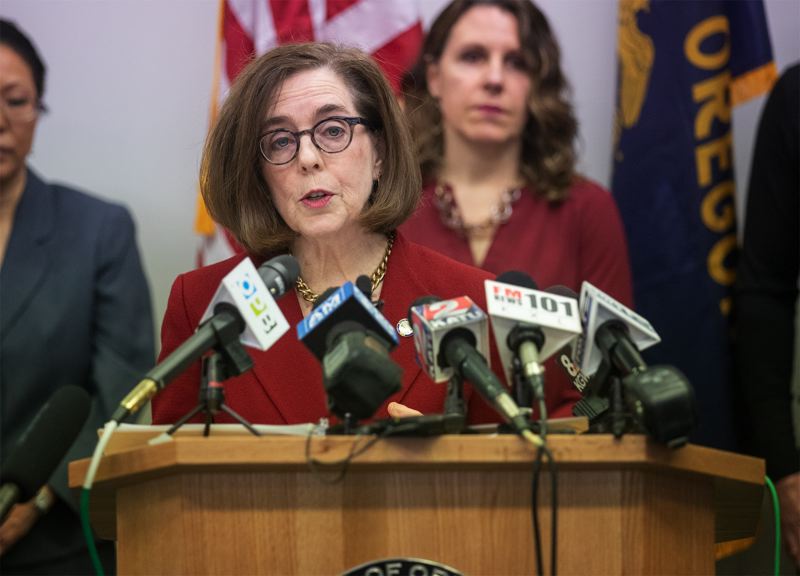 They said a new policy called "Stay Home, Stay Healthy," will be released in more detail Monday. Wheeler said it will happen after city, county and state officials try to hash out a unified approach over the weekend.

But beyond that, the press conference devolved into an array of mixed messages including several indirect answers to direct questions.

Brown, who earlier in the day had defended voluntary calls for social distancing as sufficient, called the need for such measures "a bitter pill to swallow." But the governor then made it clear that such action, for now, remains a matter of personal choice. "We all need to stay home to stay healthy," she said.

In their answers to questions from overtly puzzled reporters, Brown and Kafoury both stopped short of promising a stronger order banning non-essential trips.

Wheeler, when pressed, said he is prepared to do so within the city of Portland.

Friday's joint appearance followed an extraordinary series of public positions taken in the last three days by the chief medical officer of Oregon Health & Sciences University, Renee Edwards, Oregon's hospitals, doctors and a statewide group of public health professionals calling for an order to be issued.

The press conference came only hours after lawmakers in Salem discussed whether the state should require all Oregonians stay at home to slow the spread of coronavirus.

Wheeler stressed that the order he is contemplating for the city of Portland would apply only to non-essential trips and won't affect activities that allow people to avoid close contact, like walking a dog.

"This is not a lockdown," he said.

While Wheeler gave a clear signal that he ready to act on Monday ("an order is coming," he said), the other two elected officials stopped short of promising such a move will extend beyond Portland.

"This is a scary time for all of us," Kafoury said, adding that "I have been seeing and hearing reports that are very concerning" of people gathering, despite the increased risk it creates of coronavirus spreading.

She said the approach of spring break made a stronger call for social distancing essential.

Brown, for her part, stressed that she is not considering a statewide order. Kafoury would say only that she favors a unified approach.

You can reach Nick Budnick at [email protected].

This article was originally published by the Portland Tribune, one of two dozen news organizations throughout the state sharing their coverage of the novel coronavirus outbreak to help inform Oregonians about this evolving health issue.