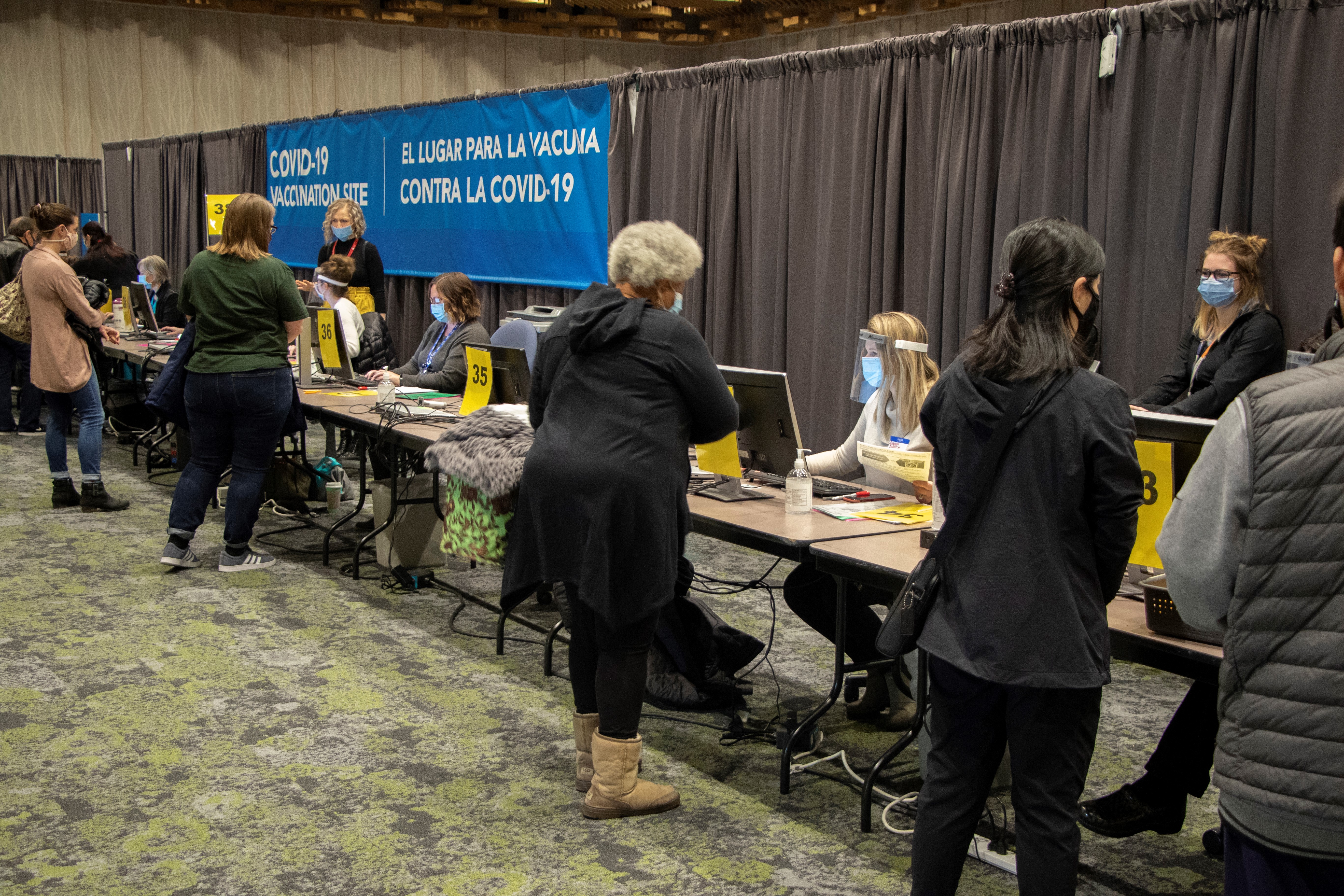 Two weeks ago, Multnomah, Washington and Clackamas counties created a webpage so that Portland area residents who were supposed to be first in line for a COVID-19 vaccine could sign up.

The initiative marked an attempt to inject some order into the inequitable and chaotic vaccine distribution process, which has enabled thousands of hospital office workers and even health care consultants -- people who are at no risk of becoming infected on the job -- of getting vaccinated before people who work with patients.

The announcement coincided with the vaccine eligibility of a new group of people: educators and school staff members. Some members of this new group, which totals about 150,000 people statewide, were getting vaccinated at the Oregon Convention Center as county public health officials announced the closure of the signup survey in an online news conference.

With school personnel now in line, those in the 1a category who’ve not been vaccinated may have to wait weeks, if not months for an appointment, Jessica Guernsey, public health officer for Multnomah County, said at the news conference.

The tens of thousands of eligible people in Phase 1a who are still waiting include medical assistants, mental health counselors, dentists and other frontline health care workers.

There is not enough vaccine to go around just about anywhere in the country. But in Oregon, the Portland area, with a population of 2.4 million out of 4.2 million statewide, has been at disadvantage compared with some other areas in the state, the health officials said.

“Oregon Health Authority has said that most people in the 1a priority group are vaccinated,” Dr. Christina Baumann, Washington County health officer, said in a release before the news conference. “That may be true in other parts of the state but it’s not true in the metro area.”

The health officials have been wrangling with the health authority for more vaccine.

“We’re talking to the state all the time,” Guernsey said. “We’re all honestly trying to get to a solution.”

It appears they made progress by early afternoon on Wednesday, several hours after The Lund Report posted its story. The health authority issued a new statement saying that next week the agency would commit 17,000 first doses to the tri-county region for those in the Phase 1a group who've not been vaccinated and 15,000 doses for educators.

"This total of at least 32,000 first doses is 60% of the 53,000 first doses to be sent around the entire state next week as part of the statewide vaccine distribution plan," the statement said.

To date, the health authority said the Portland area had received 216,000 doses -- 48% of the state’s vaccine allocation or enough for 10% of the population. Many of these doses in December and January, however, went to large hospital systems that vaccinated their entire staff.

“Multnomah County has received the highest portion of vaccine delivered in the entire state,” the statement said. It added that it "looks forward" to working with the county to get people vaccinated.

Of course, Multnomah County is the most populous in the state.

The Oregon Health Authority said  it expects “to administer at least the first dose to nearly three-quarters of the estimated 400,000 people eligible in Phase 1a in the next few days.”

Jonathan Modie, spokesman an authority spokesman, estimated that more than 200,000 tri-county residents are in the 1a category.

Meanwhile, some Oregon counties have apparently breezed through their Phase 1a category, attended to educators and school staff and are now moving on to the next group: seniors.

Deschutes County, as first reported by The Oregonian/OregonLive, announced late Monday that it was opening up vaccinations for those aged 75 and older. It said the offer was open to older people in central Oregon, which includes Crook and Jefferson counties, but residents elsewhere in Oregon are also welcome. The signup sheet through the St. Charles Health System says those 75 and older who live in Oregon qualify.

But Portland metro area vaccine administrators are abiding by the state’s dates for its priority groups. The week of Feb. 7, those 80 and older will be eligible, ages 75 to 79 can sign up starting Feb. 14, with 70 and up eligible the following week and those 65 to 69 eligible the week after that.

With the closure of the county signup sheet, the state has launched an eligibility tool on its vaccine page. Located on bottom right of the page, the app walks users through a series of eligibility questions. Those who pass that screening are then posed several health questions. If the person is approved, they have the option of scheduling an appointment at the Oregon Convention Center provided vaccine is available.

But one word of caution: The tool can only handle 1,000 people at once. If it’s overloaded, it freezes so you'll have to keep trying back.