PETA Once Again Slams OHSU Over Treatment Of Monkeys, Other Experimentation Animals 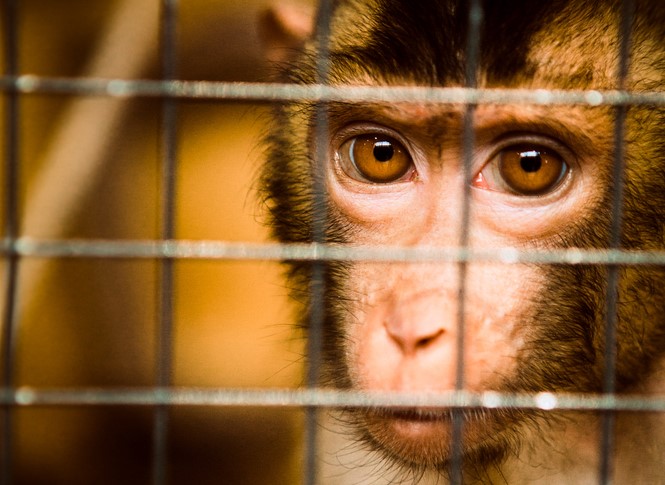 As a reminder to new students at Oregon Health & Science University, the animal rights group PETA announced Thursday it ranked the Portland institution among the “worst” in the nation for its treatment of animals – a characterization OHSU vigorously disputes.

The news release from People for the Ethical Treament of Animals continues a years-long battle between PETA and OHSU.

PETA is suing OHSU in Multnomah County Circuit Court trying to force the school to release video footage of experiments the university conducts at its Oregon National Primate Research Center in Beaverton. The sides have been trading briefs and arguments since PETA sued earlier this year saying the footage needs to be released under Oregon public records law.

This week, PETA dubbed the research center “notorious,” and said OHSU deserves the “worst” ranking because the amount of federal animal experimentation money it received and the number of violations it is cited for by federal inpectors. Eight other Oregon colleges are on PETA’s list, including the University of Oregon and Oregon State University, which both earned a “worse,” ranking.

Last year, federal inspectors found one monkey in an OHSU became entrapped in plastic piping that served as a perch, became sick and was later euthanized, another went behind cages hung on a wall and died, and a ferret was euthanized after experimental brain surgery. In total, the center racked up eight violations last year. It was not fined for any of the violations, OHSU said.

"Students live and work on university campuses for years without knowing that animals are being burned, poisoned, crippled, blinded, and subjected to other cruel treatment right under their noses," says PETA Senior Vice President Kathy Guillermo. "PETA is asking caring OHSU students to speak out against the abuse of sensitive, sentient beings in their midst."

PETA argues that animal experimentation is unnecessary. But many medical experts say experimentation at OHSU and other federally approved and inspected facilities has been crucial in developing vaccines and other medications and procedures for humans. PETA says it opposes “speciesism,” which it defined as a “human-supremancist worldview that fosters violence toward other animals.”

In response to PETA’s news release, OHSU on Thursday said it “understands and fully embraces the responsibility to provide compassionate and state-of-the-art health/veterinary care that comes with the privilege of working with animals.”

The school added that “knowledge gained through biomedical research in relevant animal models is essential to developing new ways to identify, prevent, treat or eradicate disease and to improve human and animal health. Our views on this topic reflect those of other academic health centers, universities, physicians and scientists throughout the world.”

OHSU said the incidents outlined in PETA’s news release “have long been mitigated … to the satisfaction of the federal regulatory agencies that oversee animal welfare and research.” For example, OHSU staff examined other plastic piping used as perches in monkey cages to make sure it had not come loose or would entrap monkeys, and staff implemented a daily protocol of checks for loose piping, the federal inspection report said.

OHSU said it has a rigorous internal reporting procedure for any problems that arise with regard to its animals.

OHS said it employs “hundreds of dedicated staff committed to providing humane, respectful treatment and the best possible veterinary care for our animals.”’

PETA said OHSU received $245 million in National Institutes of Health funding in 2018, nearly half of which goes towards animal experiments. The school last year had 4,910 monkeys and other primates, 348 guinea pigs, 228 pigs and 90 sheep, among other aminals it experimented on, PETA said.

Oct 3 2019
News source:
The Lund Report
Keywords:
ohsu, Oregon National Primate Research Center
×
This article is for premium subscribers. If you are one, please sign in below.
You can see two more premium stories for free. To subscribe, click here. We depend on premium subscriptions to survive, and they are tax deductible.
Sign InGo Premium Not now