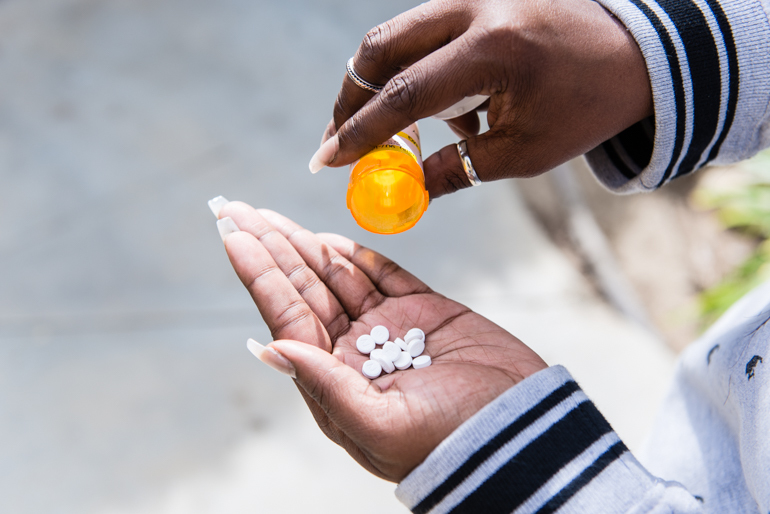 The 2010 health law was meant to expand insurance coverage so that Americans could get medical care they would otherwise go without — and not spend a fortune doing so. Though it’s still early, new evidence suggests this scenario is playing out.

Research published online by Health Affairs Wednesday examines what happened when people got insurance through the law — either with a private plan purchased via the online marketplaces or through Medicaid, the state-federal program for low-income people. The study specifically focuses on how many medical prescriptions they filled.

The researchers analyzed data from more than 6.7 million people who filled prescriptions in January 2012 and followed their patterns of medication use and out-of-pocket spending through December 2014. One third of those people had no health insurance before the Obamacare coverage took effect in January 2014. It tracked how people’s insurance status changed, compared how many prescriptions they filled after the switch and tracked how consumers’ out-of-pocket costs were affected.

The takeaway: People who got insurance through the health law were significantly more likely to get prescription medications than they were before. And when they did, they typically ended up spending less of their own money for those drugs.

“People who gain coverage filled more prescriptions and spent a lot less out of pocket. It speaks to the potential health benefits from gaining coverage,” said Andrew Mulcahy, the study’s lead author and a health policy researcher at the RAND Corp., a non-profit think tank based in California. “It speaks to the barriers to getting care when you don’t have insurance.”

That said, those gains aren’t uniform: Lower-income people were far more likely to benefit. Specifically, people who went from being uninsured to enrolling in Medicaid filled 13.3 more prescriptions on average. They also spent 58 percent less out of pocket for those drugs. Those who got private insurance, by comparison, filled four more prescriptions on average and spent 29 percent less out of pocket.

The idea, Mulcahy said, is that those who now qualify for Medicaid are more likely to go without health care if money is an obstacle. They are also more likely to have health conditions that require prescription drugs.

“Paying cash for your prescriptions is a barrier to your care. It’s more of a barrier for people who are low-income,” he said.

The findings help illuminate the law’s effectiveness, especially in terms of improving access to medication, said Jonathan Kolstad, an assistant professor of economic analysis and policy at the University of California, Berkeley. But it’s important to note that it only looks at a select group: people who were willing and able to buy at least some drugs before 2014, even if they had no insurance and had to pay the full costs themselves. That suggests they might need the drugs more, or be more motivated to manage their health — a quality that possibly guides their ability to select an appropriate health plan and then use it.

“If you have people who have such a strong demand for health care service … that’s a group we’re intrinsically interested in from a policy perspective,” said Kolstad, who wasn’t involved with the Health Affairs study but has researched how people navigate and use health insurance. “It’s not representative. But it’s a piece in the broader puzzle.”

There’s also the question of what prescriptions are necessary — whether, for instance, people are getting vital care they previously couldn’t afford, or if they are now buying drugs they don’t need because they don’t see the costs.

That remains open, Mulcahy said. But there are clues. Here, for instance, the researchers looked at people with chronic illnesses: diabetes, breast cancer, depression, asthma and high cholesterol. Those people saw a similar proportional increase in prescriptions filled and probably do need the medication.

“If you have diabetes or one of these other conditions, there’s a pretty compelling argument that you should be on some kind of treatment,” he said.

And, importantly, the growth in prescriptions can be used as a proxy to answer other questions, Mulcahy said, such as if people who get health insurance then use it to get medical care. After all, filling a prescription means the patient also visited at least one doctor. From that vantage, he said, the results are promising.

“These people are more than getting coverage,” he said. “They’re using coverage to get care.”

But getting care isn’t the same as getting healthier. Though the researchers found people were more likely to get drugs, Kolstad noted, the research doesn’t have enough evidence in it to figure out long term outcomes.  For instance, are these newly insured people being compliant with their medications? And are the drugs helping them manage their conditions and improve their wellbeing? Or are they having unintended side effects that could later be damaging?

And there’s the sampling issue, which the authors note as a limitation on their study. Because the people surveyed here were already getting prescriptions — even when it posed a greater financial hardship — they could have, for instance, been more likely to seek out a doctor than the average consumer.

Previous research, for instance, has suggested getting insurance means people are more likely to see a doctor. But there’s no proof they’ll do other things that might matter, such as eating healthier, exercising or quitting smoking. Other experts have suggested more time is necessary to understand how expanding health care coverage could actually improve health and lead to system-wide cost savings.

As more data becomes available, researchers can tackle those questions, Mulcahy said. But the findings underscore a meaningful growth.

“If the goal of the coverage expansion was to reduce the financial burden of being insured, this is direct evidence of that happening. If the goal was to improve health, we’re one step short of that,” he said. “But the signs align. We have some direct evidence it’s offering financial benefits. And there are signs it’s helping on the health side.”

KHN’s coverage of prescription drug development, costs and pricing is supported in part by theLaura and John Arnold Foundation.