Rep. Bob Jenson of Pendleton told The Lund Report he’s hoping to find a way to delay the closure of Eastern Oregon’s state mental hospital before its doctors and nurses leave for work elsewhere. Rep. Jennifer Williamson of Portland suggested converting it into a much-needed prison hospital for aging inmates.
By:
Christopher David Gray 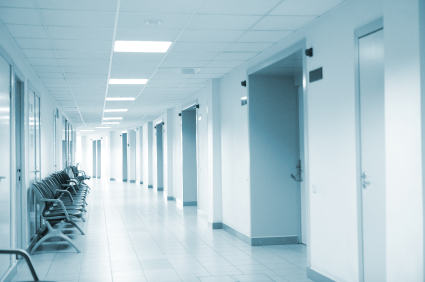 Sept. 18, 2013 — The Oregon Health Authority has laid out the timetable to legislators for the closure of the Blue Mountain Recovery Center, even as Pendleton lawmakers strive to keep Eastern Oregon’s mental hospital open.

“The train’s already left the station,” Rep. Bob Jenson, R-Pendleton, told The Lund Report. “We got to find the sidetrack somehow.”

Blue Mountain is set to stop taking patients next month and close for good Dec. 31. The hospital has a long track record, opening in 1948.

Pamela Martin, the director of the Addictions and Mental Health Division, said half of Blue Mountain’s 60 patients will be ready for discharge, but any civilly committed patients who need further treatment will be transferred to two mothballed 26-bed wings in the new Oregon State Hospital in Salem.

Those hospital wings are scheduled to open in November, with patients transferred over the following month. They were built the same time as the new hospital but have sat empty for lack of funding in the previous budget.

After Blue Mountain stops taking patients, new civilly committed patients will be sent to either Salem or the Oregon State Hospital in Portland, but there is already a waiting list to get into state psychiatric hospitals. The Legislature has budgeted money for a new hospital in Junction City, near Eugene, but it won’t open until 2015 at the earliest.

At Wednesday’s meeting of the full Joint Committee on Ways & Means, lawmakers accepted Martin’s report, but talk stirred of potentially keeping the hospital open and staffed until next spring so it could be turned into a geriatric hospital for the Department of Corrections.

The prison hospital idea was pitched by Rep. Jennifer Williamson, D-Portland, who said it would be wise to keep the facility in place with its skilled workforce because the Department of Corrections needs to increase hospital capacity with an aging population, driven by mandatory prison sentences.

Her idea was immediately grasped by Jenson and his Pendleton Senate counterpart, Sen. Bill Hansell, as well as Sen. Jackie Winters, R-Salem:

“It’s a piece of the puzzle that needs to be worked on to come to fruition,” Winters said.

If the hospital closes, Jenson and Hansell are concerned that the professional staff, particularly the nurses, would be cut to the wind and leave Eastern Oregon. Recruiting newcomers to move to Pendleton could be difficult with the state suffering a nursing shortage. Jenson reminded his colleagues that even the Oregon State Hospital in Salem has had trouble filling all its positions with qualified applicants. “If we lose the workforce, we’re going to have to restart,” said Hansell, who also learned that most workers would prefer to remain in Pendleton, according to the Service Employees International Union.

In place of Blue Mountain Hospital, three new residential mental health facilities, each with five beds, are being built in Pendleton. One will serve as an acute crisis unit while the other two will act as transitional residential treatment homes, one for adolescents and the other for adults.

“Every effort will be made to place people from Eastern Oregon in those two facilities,” Martin told legislators.

Some Blue Mountain employees will find work in the new units, but with only 15 beds and less intensive care, the new residential treatment units will only employ a fraction of the people if the hospital closes. Others could find work in Salem. And some of the staff has already left voluntarily, requiring the state to hire temporary employees.

“One of the major barriers is the physical quality of the [Pendleton] hospital,” said Martin, who toured the 65-year-old facility after assuming her leadership position in May. “It’s outlived its natural life span.”

Martin said that it costs about $1 million a month to operate Blue Mountain, but the two new mothballed units in Salem will cost only $700,000 a month to run, she added, comparing them to empty floors of a hotel.

If Blue Mountain Hospital were renovated, it would cost an estimated $11 million, and it’s uncertain if the hospital has significant asbestos insulation or lead pipes, which would increase costs exponentially.

Jenson rebuffed the asbestos concern, noting that most of the facilities have undergone substantial renovations in the past 25 years. “If there’s a lot of asbestos in the building for these patients, maybe we have a good class-action lawsuit waiting for us,” Jenson quipped. Before it was razed, the state had been fined by the federal government previously for asbestos in the old Salem state mental hospital.

Martin expects to report back to legislators with detailed information about the impacts of the closure on Pendleton, as well as the potential for its reuse as a prison hospital. But that could be too late to delay closure of Blue Mountain Hospital. Lawmakers may not be back in Salem until nearly Thanksgiving, just weeks before the last patients are moved across the Cascades.