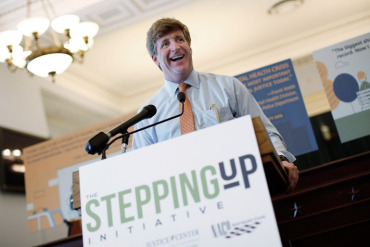 Former Rep. Patrick Kennedy, D-R.I., was a senior in high school the first time he checked into rehab. His struggle with drug addiction and bipolar disorder continued to haunt him through his 16 years in Congress. But his first-hand experience with these illnesses also drives his long-standing interest in shaping public policies to confront the challenges faced by people with mental health problems.

One of Kennedy’s greatest legislative achievements is spearheading the passage — with the help of his father, the late Sen. Edward Kennedy, D-Mass. — of the landmark Mental Health Parity and Addiction Equity Act of 2008.

Since choosing to leave Capitol Hill in 2010, he has pushed to bring mental health policy out of what he says is “the dark ages” — using the advantages, he says, of coming “from a famous family with a powerful, nationally recognized name. [It] gives me a convening power.”

These days, he is most visible in his role as founder of The Kennedy Forum, an advocacy coalition for the mentally ill and mental health policy, and co-founder of the nonprofit research organization called One Mind.

“One Mind’s mission,” he says, “is to accelerate [mental health] cures and therapy by ensuring that we don’t duplicate science.” To this end, he adds, “we have already … created the largest platform to study traumatic brain injury and PTSD in the world,” bringing other countries into the effort.

Testifying last month before the House Energy and Commerce Subcommittee on Health, he said the pending Helping Families in Mental Health Crisis Act of 2015 would provide resources and programs for psychiatric care. “The time is now” for reform, he said, questioning why “with mental illness and addiction we wait for crisis” instead of intervening early.

KHN reporter Alana Pockros talked with Kennedy about problems he sees in the nation’s mental health system and the steps needed to fix them. The following interview has been edited and condensed.

Q. You’ve said that the health system is “stuck in the same mentality as five decades ago.” What does this mean?

A. Culturally, we still assign issues of mental health and addiction [to] moral character. We still assign blame to people with these diseases even though they have been known to be diseases for five decades. … Instead of saying “it’s your fault” to addicts, “you made this choice to start,” we now know to look at this as a biological disease.

So, we need to approach illnesses in a different way. Our science tells us one thing, but our culture has told us some completely different story. That’s why our public policy is medieval. In another 20 years from now, they are going to look back on this period like we look back on segregation [or] bigotry against gays and lesbians.

Q. This legislation encompasses a range of mental health issues. What do you think is the top priority?

A. I would say if we want to make a difference on a population basis, the number one issue is prevention. We know upon the first incident of psychosis how to interrupt the cycle of that illness with aggressive treatment, just as if we were to use aggressive treatment for cancer. If we did that, we would dramatically reduce incidence of disability in this country.

Today we are reacting to an epidemic of untreated mental illness. So the way to deal with that is to build a chronic care or intensive care system so that people are treated and cared for, and not abandoned. That goes back to the first point: we know these are chronic illnesses, yet we don’t employ a chronic care approach to their treatment. Treat it like asthma, treat it like diabetes; treat it in a chronic care management way.

Q. In terms of policy change and advocacy, are you targeting the federal level or state governments? How?

A. On the federal level, we are looking at The 21st Century Cures Act. [This bill is designed to speed the drug discovery and approval process. It includes provisions to improve communication and collaboration among researchers.]

It is littered with loopholes on data sharing. [The bill has] so many exceptions to [its] mandate that [scientists] share data, that it really undermines the whole purpose of making [research on mental illness] an urgent task. Even though the biggest [research] funders are taxpayers, through the National Institutes of Health, academia totally sequester and “secret away” all their data and don’t share with anyone else. [Universities] husband that data and try to sell it for profits, even though taxpayers pay for the data. That data belongs to the public, it doesn’t belong to universities. So we won’t learn whether there is an algorithm, because someone is holding back valuable information that could help to provide “the missing piece to the puzzle.” That’s what we are dealing with.

Q. How does your new role help you push for change? How has it affected your message?

A. I have been blessed by having led The Mental Health Parity and Addiction Equity Act fight. What that allowed me to have, even though I’m no longer in Congress, is a platform to organize and spur collaboration among the very disparate and fragmented stakeholders in neuroscience and for the clinical delivery of neuroscience. I’ve worked in both of those worlds and enjoyed a position of trust. … I still have some credibility in this space, and I’ve used it.

I am glad Mr. Kennedy is dedicated to improving the care for those suffering from mental health concerns. Unfortnately, he appears to be a little bit in the dark ages himself in understanding the latest research.

For starters, his view seems to be that "mental illness" is a purely biological phenomenon, while research shows more and more that even those suffering from schizophrenia and bipolar disorder have almost always had difficult and traumatic histories that triggered or exacerbated their symptoms. He seems to be very focused on drug research, but is perhaps unaware of an increasing mass of research suggesting that long-term treatment with psychiatric drugs may be actually impeding any chance of recovery, and that psychosocial approaches are more effective in the long run, or at least less harmful. (See the Wunderlink and Harrow studies on schizophenia outcomes for examples, or read "Anatomy of an Epidemic" by Robert Whitaker for a summary of the outcomes research for various drug treatments.) He also seems unaware of the WHO studies in the 90s that showed developing nations like Columbia, Nigeria and India who rarely use psychiatric drugs had MUCH better schizophrenia outcomes than first-world nations like the US and Great Britain who "aggressively treat" schizophrenia primarily with medical approaches.

Finally, I always hear from biologically-oriented advocats how most people supposedly view "mental health" problems as moral issues rather than medical problems. Research does not bear this out at all. Recent surveys have showed that 80% or more Americans believe that depression is caused by "low serotonin," even though key psychiatric opinion leaders are now acknowledging that this theory has not been shown to be accurate and was pretty well abandoned by knowledgable researchers back in the 1980s. So people very much believe that mental illness is a medical problem, even though evidence now strongly supports that this is at best a gross oversimplification of a very complex set of issues.

There is a lot of propaganda being bandied about regarding "mental illness." But if we REALLY want to come out of the "dark ages," we need to start listening to what our scientific studies are really telling us, rather than preaching dogma that don't hold up to scientific scrutiny, even if they make people feel better about continuing to pursue what has clearly beeen shown to be a primitive and simplistic approach that doesn't really seem to work for the long term.