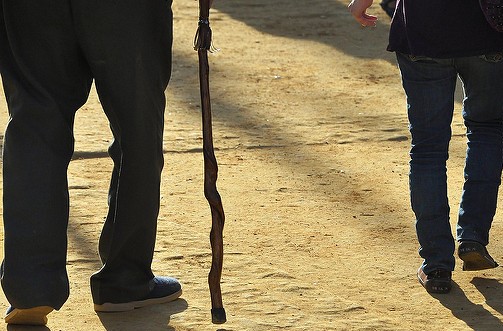 Dr. Alan Green’s patients travel from around the country to his tiny practice in Queens, N.Y., lured by the prospect of longer lives.

Over the past two years, more than 200 patients have flocked to see Green after learning that two drugs he prescribes could possibly stave off aging. One 95-year-old was so intent on keeping her appointment that she asked her son to drive her from Maryland after a snowstorm had closed the schools.

Green is among a small but growing number of doctors who prescribe drugs “off-label” for their possible anti-aging effects. Metformin is typically prescribed for diabetes, and rapamycin prevents organ rejection after a transplant, but doctors can prescribe drugs off-label for other purposes — in this case, for “aging.”

Rapamycin’s anti-aging effects on animals and metformin’s on people with diabetes have encouraged Green and his patients to experiment with them as anti-aging remedies, even though there’s little evidence healthy people could benefit.

“Many of [my patients] have Ph.D.s,” said Green, who is 76 and has taken the drugs for three years. “They have read the research and think it’s worth a try.”

In fact, it’s easier for patients to experiment with the drugs — either legally off-label or illegally from a foreign supplier — than it is for researchers to launch clinical trials that would demonstrate they work in humans.

No rigorous large-scale clinical trials have been conducted aimed at aging. The FDA so far has not agreed that a treatment could be approved for delaying the onset of aging or age-related diseases, citing questions about whether research can demonstrate an overall effect on aging rather than just on a specific disease.

Given such reservations, pharmaceutical companies have little incentive to fund costly, large-scale trials. Also, both metformin and rapamycin are generic and relatively cheap.

“There’s no profit,” said Matt Kaeberlein, a professor of pathology at the University of Washington medical school whose team received a $15 million grant from the National Institutes of Health to study the effects of rapamycin in dogs, but has noted the lack of funds for studies in people. “Without profit, there’s no incentive.”

Yet, late last year, the NIH rejected a $77 million grant proposal by a prominent group of researchers to determine whether metformin could target multiple age-related diseases at once. It was the second rejection of the ambitious but unorthodox bid.

“We’re going to keep trying,” said a lead author of the metformin proposal, Stephen Kritchevsky, a co-director of the Sticht Center for Healthy Aging and Alzheimer’s Prevention. “These things take time.”

Less is known about rapamycin’s anti-aging effects and its possible side effects in the general population, including the possibility it could lead to insulin resistance. Yet a litany of studies show that rapamycin extends animal life spans. It also has been shown in such studies to stave off age-related diseases, from cancer to cardiovascular diseases to cognitive diseases.

“There should have been a clinical trial for rapamycin and Alzheimer’s disease years ago,” said Kaeberlein, who has publicly urged NIH to use a historic boost in Alzheimer’s funding to study the drug’s effects. “But the fact is, the clinical trials are really hard and expensive.”

Alexander Fleming, a former FDA official and advocate for the metformin proposal, said he believed it was difficult for regulators and funders to grasp that aging can be tackled as a whole — not just one disease at a time.

In fact, NIH reviewers who rejected the metformin proposal cited problems with the project’s aim of testing multiple age-related diseases at once. The researchers considered appealing the decision, asserting those reviewers were biased against studying aging as a whole. NIH, which declined to comment, discouraged the attempt.

Dr. Evan Hadley, director of the National Institute on Aging’s division of geriatrics and clinical gerontology, told Kaiser Health News that NIH is not ruling out funding projects that target aging, saying such proposals are still “of interest.”

The FDA also is open to considering such efforts “based on the scientific evidence presented to us,” said FDA spokeswoman Amanda Turney.

Fleming, who oversaw the controversial FDA approval of metformin for Type 2 diabetes, said an argument could be made that it could approve a drug like metformin for preventing age-related diseases instead of just treating them. He points to now widely used statins, which were approved to prevent heart disease.

“There is some kind of belief that the FDA can’t approve a therapy to reduce the progress of aging or age-related conditions,” said Fleming, an endocrinologist. “It’s just not true.”

Given the lack of consensus, other researchers have moved ahead with clinical trials focused on specific age-related conditions.

Researchers have shown that a “cousin” of rapamycin boosts the effectiveness of flu shots and lowers the incidence of upper respiratory infections in seniors by up to 30 percent. This group, led by Dr. Joan Mannick, has licensed it from Novartis and is now working on getting approval to target Parkinson’s disease.

“We’re trying to be pragmatic,” Mannick said of her team’s approach.

Some doctors and patients have decided not to wait. At a recent scientific forum on aging, one of the researchers on the NIH proposal asked the 300 or so people in attendance to raise their hands if they were already taking metformin for aging.

“Half the audience raised their hands,” recalled the researcher, Dr. Nir Barzilai, director of the Institute for Aging Research at the Albert Einstein College of Medicine, who said a pharmaceutical rep recently estimated that metformin sales are up 20 percent.

Barzilai is concerned about the off-label trend, although he sees metformin as promising. He contends that researchers in the longevity field first need to set up a framework for testing in clinical trials. Even if metformin doesn’t pan out as the most effective drug, he asserts a model like the metformin proposal is needed for any major clinical trial to proceed. His group is now trying to secure about half the amount of funding it requested from NIH from a mix of nonprofit and private investment.

“Much of the aging field is charlatans,” Barzilai said. “They tell you take this or that and you’ll live forever. But you have to do a clinical trial that is placebo-controlled and only then can you say what it really is and whether it’s safe.”

Green nonetheless said he plans to continue prescribing. He estimates about 5 percent of his patients are doctors themselves. Others have backgrounds in science or are in the upper-income bracket. According to his website, he charges $350 for an initial visit and does not accept insurance.

“They fly to see me on their own planes,” he said.

But other doctors who are open to prescribing metformin are holding off on rapamycin, given side effects in higher doses in sick patients.

“I need to see more evidence,” said Dr. Garth Denyer, a doctor in The Woodlands, a wealthy Houston suburb, who said he prescribed metformin to a small number of patients but is waiting on rapamycin. “I’m hoping to see more data on safety.”

Michael Slattery, who has been HIV-positive since 1983, said he is taking both drugs because the virus is likely to shorten his life expectancy.

So far, he has not noticed any side effects or benefits. His partner, however, who is also HIV-positive, stopped taking rapamycin after getting kidney infections.

“I feel I have nothing left to lose,” said Slattery, a retired biotech consultant.

Other patients remain hopeful, even though the evidence is unlikely to be definitive anytime soon.

Linda Mac Dougall, 70, of Port Hueneme, Calif., said she participated in a small study that did not have a placebo control. She’s uncertain whether it had any effect on her.

“I really haven’t noticed anything, but that doesn’t mean it didn’t work,” said Mac Dougall, a massage therapist for seniors. She has slightly more confidence in the wide array of supplements she takes, she said: “If I live until I’m 110, we’ll know.”

Kaiser Health News is a national health policy news service. It is an editorially independent program of the Henry J. Kaiser Family Foundation which is not affiliated with Kaiser Permanente.