A growing number of deaths the Multnomah County Medical Examiner’s Office investigates are among people experiencing homelessness.
By:
Thacher Schmid 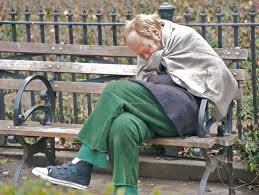 When Michael Jensen was found dead in his tent, his feet were sticking out of the tent, and he was lying on his right side “with his hands up under his chin like he was cold,” a homeless outreach worker said.

Temperatures for the day when Jensen was reportedly found deceased, either November 10 or 11, hovered between 50 and 44 degrees, with significant rain and gusty winds.

“I think he froze to death,” Gardipee said.

It’s not clear whether or not that’s true. Jensen’s death would likely have been classified as “domicile unknown,” but there could have been other factors involved. Multnomah County Health Department and county medical examiners don’t typically release any information about, or comment on, specific domicile unknown deaths.

What is clear is that amidst a continuing, perhaps worsening, housing crisis, some people do freeze to death on Oregon streets. During a frigid, snowy cold snap in Portland during the first 17 days of 2017, six unsheltered homeless people died of hypothermia on city streets.

This winter was milder in Oregon, but not in Atlanta, Georgia. In a similarly deadly three week cold snap there, 11 died on the streets of Atlanta in January this year.

The deaths are a fraction of an estimated 700 unsheltered homeless deaths from hypothermia in the U.S. each year, according to the National Homeless Coalition. The coalition estimates the total “indigent disposition” or “domicile unknown” deaths from all causes is between 3,000 to 13,000, said Megan Hustings, interim director.

Since 2011, the annual “Domicile Unknown” report, a collaboration between Multnomah County and advocacy nonprofit Street Roots, provides a baseline analysis of such deaths for the Portland area — unlike most jurisdictions nationally.

Hustings at the National Coalition of Homeless said she was aware of a similar report in Sacramento, but few others.

“We are sort of the only ones who pay attention to this [nationally], to folks passing away on the street,” Hustings said. In 2010, the coalition studied hypothermia deaths nationally and found 700. It hasn’t replicated it since, so it’s not clear if anyone does such a study now.

Amongst those who died of cold in 2017, one woman’s death in particular touched Oregonians: that of Karen Batts, a 52-year-old African American woman struggling with mental illness who froze in a downtown Portland SmartPark garage, three months after her eviction from affordable housing for $338 in unpaid rent.

More than a year later Batts’ tragic death was trending on Facebook, presented as if it were breaking news in early 2018 by a website called Bloomsmag.com, a now defunct site linked on GoDaddy.com to a man named Muhammed Naeem.

In the wake of its 2016 Domicile Unknown report, released in December, the Multnomah County Health Department shared information with the Lund Report showing a total of nine hypothermia-caused domicile unknown deaths in Multnomah County in 2016 and 2017. Of those, six occured during the historic snowy deep freeze that killed Batts — but three were outliers, on days when temperatures didn’t come close to freezing, with low temperatures of 41, 45 and 50 degrees, according to the National Weather Service.

Some of those who live amongst the more than 3,000 unsheltered houseless people in the four-county Portland metro area believe more people freeze to death than authorities say. Jensen may be an example, Gardipee says.

“That doesn’t really mean anything to us,” Dr. Gunson. Dr. Gunson said her team of death investigators carefully studies the scene of a domicile unknown death in addition to performing an autopsy.

Three possible indicators of a hypothermia death Dr. Gunson does rely on:

• Paradoxical undressing, which happened in Batts’ case. The dying person’s “thermostat is uncoupled,” Dr. Gunson says, leading them to feel overheated and to remove clothing.

• Wischnewski ulcers, a series of gastric mucosal erosions or ulcers. “If we see those, that gives us a huge clue,” Dr. Gunson said.

• Livor, or blood settling, which is bright pink. “After death, your heart isn’t beating any more, so your blood just settled by gravity,” Dr. Gunson explained. “Normally it’s a deep purple color after about eight hours or so. But from people who die from the cold it’s a bright pink, almost like carbon monoxide. That’s another clue.”

“You can die of hypothermia even if the weather is about 45 degrees or even 50 degrees, but you get wet,” Dr. Gunson said. “Many times the problem with homeless is they don’t stay dry.”

Alcohol is “particularly” a problem, Dr. Gunson said, because it can cause blood vessel dilation, on the surface of the body. The old trope about warming up with a stiff shot of brandy can be a killer.

Obtaining any information, even just dates, on these extremely sensitive cases can be tough. Dr. Gunson and other health officials work hard to protect such information.

“This isn’t really HIPAA,” said Multnomah County Health Officer Dr. Paul Lewis, referring to the Health Insurance Portability and Accountability Act of 1996. “The vital records data, if you’re not the next of kin, details about the death are generally considered private.”

A whole sequence of events happens when a body is found outside: police and emergency medical technicians are called, death investigators often follow up, medical examiners do autopsy, notification of next of kin, cremation. The Oregon State Medical Examiner and Multnomah County Medical Examiner’s Office investigate “all suspicious or unattended deaths, including accidental or violent deaths or overdoses,” the 2016 Domicile Unknown report says.

Dr. Gunson said the scene investigation and finding family members are of paramount importance. “Those are the important steps we have to take,” she said. “We do not stint on them. We don’t cut corners.”

Yet Dr. Gunson’s offices operate on a finite budget while ruling on the official cause of death for about a thousand deaths each year on what she called “an antiquated system.”

“I would love to give everybody all the data they want,” Dr. Gunson said. “The thing is, that may or may not be important. It may be one of those things that it may help somebody’s research, but it will put me behind by two days.”

A growing number of deaths the Medical Examiner’s Office investigates are among people experiencing homelessness, the 2016 Domicile Unknown report states. In 2016, 32 people died in a public space, the report says.

In Portland, there’s a list of funeral homes who take the body, cremate and hold on to the remains, even if no one can be found to take them.

“It’s sort of remarkable how many [family members] will step up and take responsibility for their dead loved one,” said Dr. Gunson. “[But] there are other times when people say, ‘Well, we don’t have enough money, we don’t want to have anything to do with it.’ Then we have a system where we can contact one of the local funeral homes and they take what they call a ‘turn case.’”

Or there may be no family member to find. Jensen may have been in that category, Gardipee said — his mom had died not long before he did. “I think that was the only people he had,” Gardipee said.

While her job is to make clear-eyed, unsentimental conclusions based in the evidence, Dr. Gunson is not insulated from the emotional impact of her work.

“You always feel sad for somebody that dies alone in the cold,” Dr. Gunson says. “How could somebody not feel bad about that? You wonder, what could we have done differently to not make this happen?”

Thacher can be reached at [email protected]