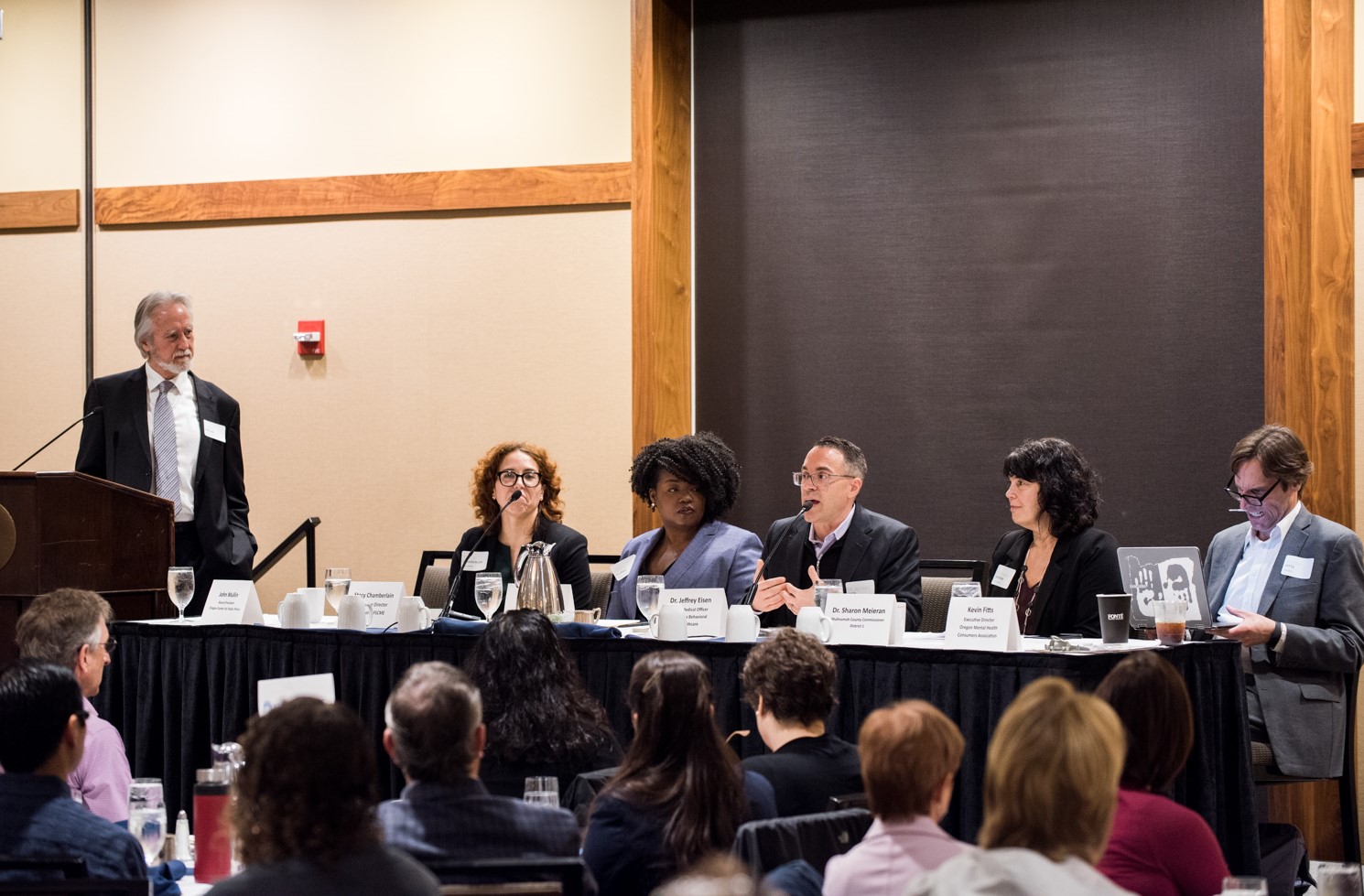 Mental health services have fallen short for the people who need them most in Oregon — the Portland area especially — but a panel of authorities offered hope Thursday that the system can be improved through collaboration among multiple service providers.

“There’s a shared interest and a shared obligation toward solving these problems in front of us,” said Dr. Jeffrey Eisen, chief medical officer of Cascadia Behavioral Healthcare, “and delivering a type of care that really makes a difference in people’s lives. Organizations that do this kind of work — we actually depend on each other very much because of the inter-related system of care in which we are all involved.”

About 210 people attended the session, an event sponsored by Oregon Health Forum, a nonprofit affiliated with The Lund Report.

The speakers repeatedly mentioned that collaboration has been an issue among the social service and government agencies tasked with helping people in need of mental health services.

“There was this interesting comment that was marked in bold that said that organizations serving those with mental health concerns are frenemies — that they appear to work together but underlying that there is this certain culture of competitiveness that exists among those organizations and a lack of friendliness as well,” Eisen said.

Eisen said there are many reasons for this, including the fact that organizations have to compete for limited funds. On the upside, he said he’s seen an improvement in cooperation in the last year, but stressed that more work can be done. Besides his leadership role at Cascadia Behavioral Healthcare, one of the largest mental health providers in the state, Eisen is clinical assistant professor of psychiatry at Oregon Health & Science University.

One of the recommendations in that study — one of the essential solutions, said Meieran, who shepherded it through,  was a “shared vision of what a mental health system should be … to work holistically for people.”

She said one of the study’s top priorities was to work on collaboration.

“It won’t be easy to build a system unless we have a shared, actionable vision for what the system should look like,” said Meieran, who represents District No. 1.

There needs to be a shared leadership and accountability, she said.

Besides serving as a county commissioner, Meieran works as an emergency department doctor for Kaiser Permanente.

“So often in the emergency department we have seen the people who have fallen through the cracks in our systems of care,” Meieran said. “They end up often in the place that is the most expensive, and least effective place to deal with whatever their underlying issue is.”

And often, those patients are in the emergency department not for a “traditional medical issue,” Meieran said, but because they are homeless, or they have a substance use disorder or they are having a mental health crisis.

Meieran pointed to Clarke, who was recently elevated to director of the county’s mental health and addiction services, as a reason for her optimism.

“Our role is crucial in terms of where we sit in terms of having a system that truly speaks to the needs of the diverse population that we serve,” Clarke said. She also stressed the importance of cooperation.

“At Multnomah County Mental Health and Addiction Services Division, we are committed to really making sure we hold true to our value of collaboration, working from a collective lens, to really move toward this next phase of meaningful integration,” Clarke said.

Mental health services also have a staffing problem. Frontline social service workers often end up burned out and in need of services themselves, said Chamberlain.

Something as simple as a lack of child care services for a mental health professional can have a domino effect, she said.

“The system is set up in such a way that the folks who are trying to provide essential services to these clients cannot function,” Chamberlain said, “which also causes retraumatization to those clients they want to serve.”

Chamberlain emphasized that her union typically hears from workers when they want to organize.

“The number one reason that we hear from (mental health) workers when they want to organize,” she said, “is the need to stabilize the system for clients. Because they know that they’re failing them. But the fact is this system is also failing these workers.”

Fitts, a veteran of advocating for mental health services in the state, said the system needs more peer workers who’ve had an experience with mental illness of their own and are certified to help others.

He is championing legislation that would create pilot peer-run services to help patients in a crisis.

House Bill 2831 would provide funding for peer-run organizations in the Portland metropolitan area, eastern Oregon and southern Oregon for individuals with mental illness experiencing acute distress, anxiety or emotional pain. The bill was referred to the House Ways and Means Committee on Monday.

Within the next five years, peers will account for more than  20 percent of the behavioral health workforce, Fitts said, citing a 2017 statement from Ron Manderscheid, executive director of the National Association of County Behavioral Health and Developmental Disability Directors.

Innovative solutions may be needed to combat current problems, Eisen said during a question-and-answer period.

He said he would endorse exploring so-called safe consumption sites, where addicts could take drugs in the presence and care of service workers.

“In order to create a system of excellence, we do need to be innovative and we do need to push the envelope and ask questions and have discussions about certain modes of delivery that may be not considered as common or reasonable in this country,” Eisen said,

“If you were to consider harm reduction as a key component of recovery, then it is clearly important that something like safe consumption sites ought to be on the table for conversation, right?” Eisen said, to applause from much of the audience. “That’s a hard conversation to have.”

You can reach Allan Brettman at [email protected].