Ryan Weaks at home in Aloha by Lynne Terry.jpg 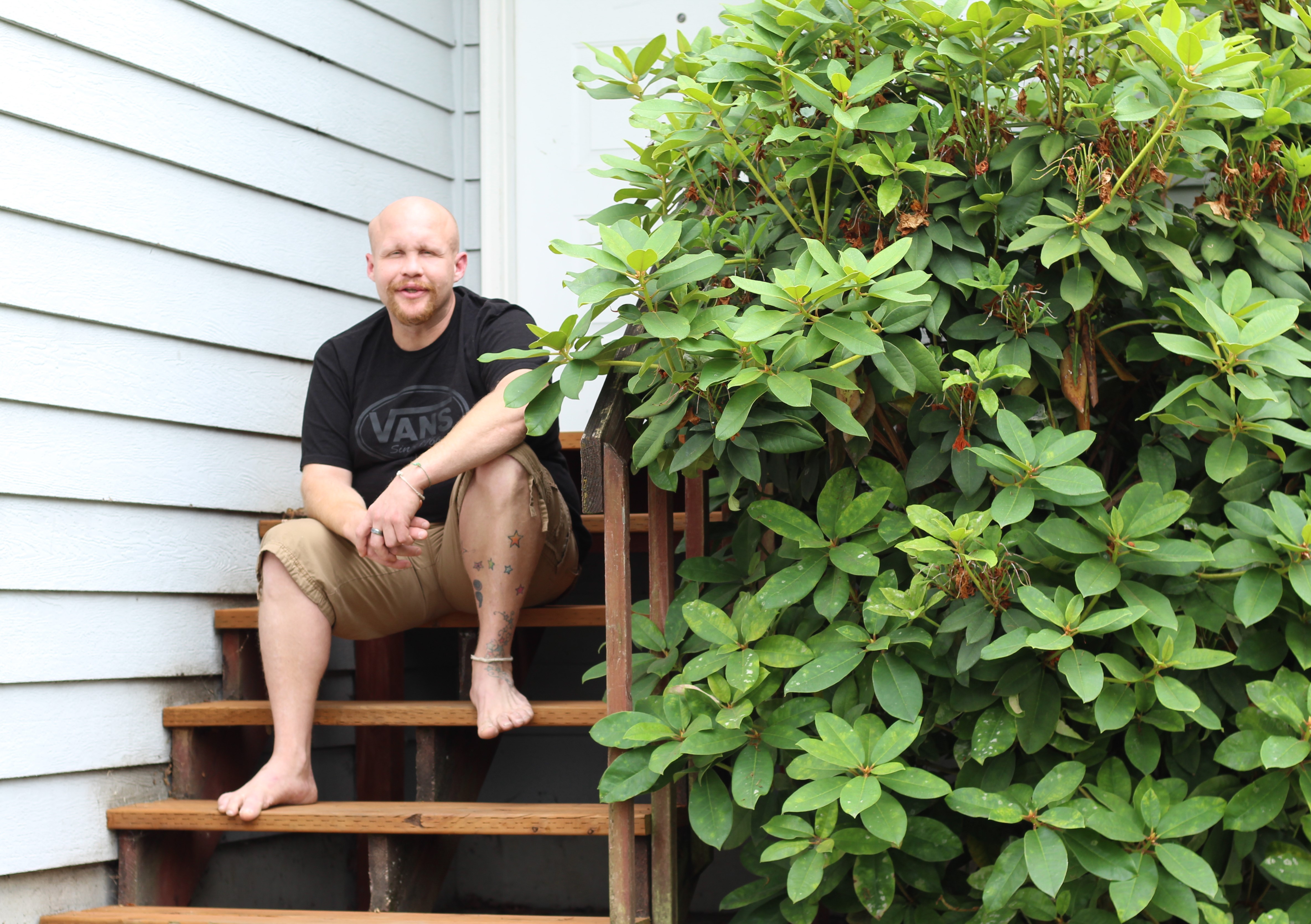 In March, near the end of his sentence in the Washington County Community Corrections Center, Ryan Weaks mapped his future. Once out, he would go to the probation office. Then he would sign up for food stamps. And then he would get high.

At 37, Weaks was an addict, taking anything he could get his hands on. He’d been taking drugs for 20 years and had committed multiple non-violent felonies, such as identity theft and fraud, to buy them. For the past five years, he had lived on the streets of Portland.

But two days before his release he attended a meeting in the jail of Dual Diagnosis Anonymous, a 12-step program that caters to people who have a mental illness and a substance abuse problem.

He listened to two women tell their stories. They resonated with his own.

“They saved my life,” Weaks said.

Dual Diagnosis Anonymous, a nonprofit based in Portland, has helped scores of people since the first meeting was held in Oregon in 1998. It now has about 150 chapters across Oregon, seven in other parts of the country and eight abroad, including in Ireland, the Czech Republic and Guam.

Like other peer support groups, Dual Diagnosis Anonymous pivoted online when the pandemic struck. It offers 14 meetings a week - far fewer than before the virus struck. But demand is high, with more fear, anxiety and stress across the country as people grapple with forced isolation and economic hardship caused by the pandemic. People with a dual diagnosis now need help more than ever, said Doyal Smith, DDA’s executive director and a certified drug and alcohol counselor since 1991.

“There are a lot of people out there searching for answers now,” Smith said.  “We’re averaging over 3,000 visitors a month just to the web page.”

The meetings, which take place in the morning and early evening to accommodate various time zones, have attracted people in cities nationwide and even abroad, with one person recently logging in from St. Petersburg, Russia.

“The fellowship is great,” Weaks said. “It keeps me sane and drug free.” Dual Diagnosis Anonymous serves a population that can be difficult to treat, experts say. A report published in April by the National Institute on Drug Abuse said that people with mental illness and addiction are less likely to adhere to an addiction treatment program and they have higher dropout rates than addicts without a mental illness.

But these programs can be difficult to find. There are a few dual diagnosis providers but most are specialized and stay within their field. Behavioral health programs want people to get sober before treating them, and addiction specialists often lack the training to handle mental problems.

“Trying to find an appropriate program for people who have both of those challenges is very, very difficult,” said Ally Linfood, peer services coordinator at Clackamas County.

She said her son, who has a dual diagnosis, was rejected by mental health clinics and that addiction programs didn’t know how to cope with his behavior.

“There wasn’t anything available that did both in a parallel process which is really what he needed,” said Linfoot, who oversees the county’s contract with DDA.

As a parent, she was terrified.

“You feel like you’re having to wing it,” Linfoot said. “You just hope they don’t die before they get to a place of recovery.”

Mental illness is a big problem in Oregon. The latest report by the nonprofit organization Mental Health America ranks the state the worst in the nation for the prevalence of mental illness among adults and near the bottom for young people.

The National Institute on Drug Abuse report said that mental health issues and substance abuse are often linked. About half of those with a mental illness also abuse drugs or alcohol during their lifetimes, it noted.

One does not necessarily cause the other, the report said, but it said that mental illness can contribute to substance abuse and that addiction can exacerbate mental illness. Certain factors, like stress and genetic makeup, can play a role in both.

Weaks said he turned to drugs in high school when he was 16 because he was bored. He was raised in a small town in Missouri by his grandmother, who was very strict. Weaks said he was not allowed out -- not to friends’ houses or to parties. He had to stay home.

After years of cycling through the justice system and living on the streets, he was ripe for a change. He quit taking drugs before his arrest in February, making him a prime candidate to benefit from that Dual Diagnosis Anonymous meeting in jail.

“I went cold turkey,” Weaks said. “It was enough.”

Dual Diagnosis Anonymous was created by a Vietnam vet, Corbett Monica, who developed a heroin addiction when he returned to Southern California from the war. He became suicidal and was committed by his family to a psychiatric ward in California. While there, he turned his life around, Smith said.

“He got better and understood the need for love and to give back and help people,” Smith said.

Monica took college classes in community mental health work and earned a bachelor’s degree in psychology. In the 1990s, he worked with people in a group home in Fontana, California, trying to help them with their addictions. He took them to a local Alcoholics Anonymous meeting but they were kicked out because of their behavior stemming from their mental health medication, Smith said.

Monica called AA’s corporate office and complained. They suggested he start his own 12-step meeting, so he did.

He modeled the organization after AA, adapting the language to people with a dual diagnosis. The organization has a customized version of the typical 12 steps, acknowledging illness, taking responsibility and giving back, plus Monica authored an additional five steps that focus on a willingness to accept help for addiction and mental illness, an understanding of the role of prescribed medication and an acceptance of developing an addiction free lifestyle through fellowship.

“He was understanding and sympathetic of people with mental health,” Smith said. “He was trying to bring normality to the illness piece.”

But most of all his mission was to give people in recovery hope, Smith said. 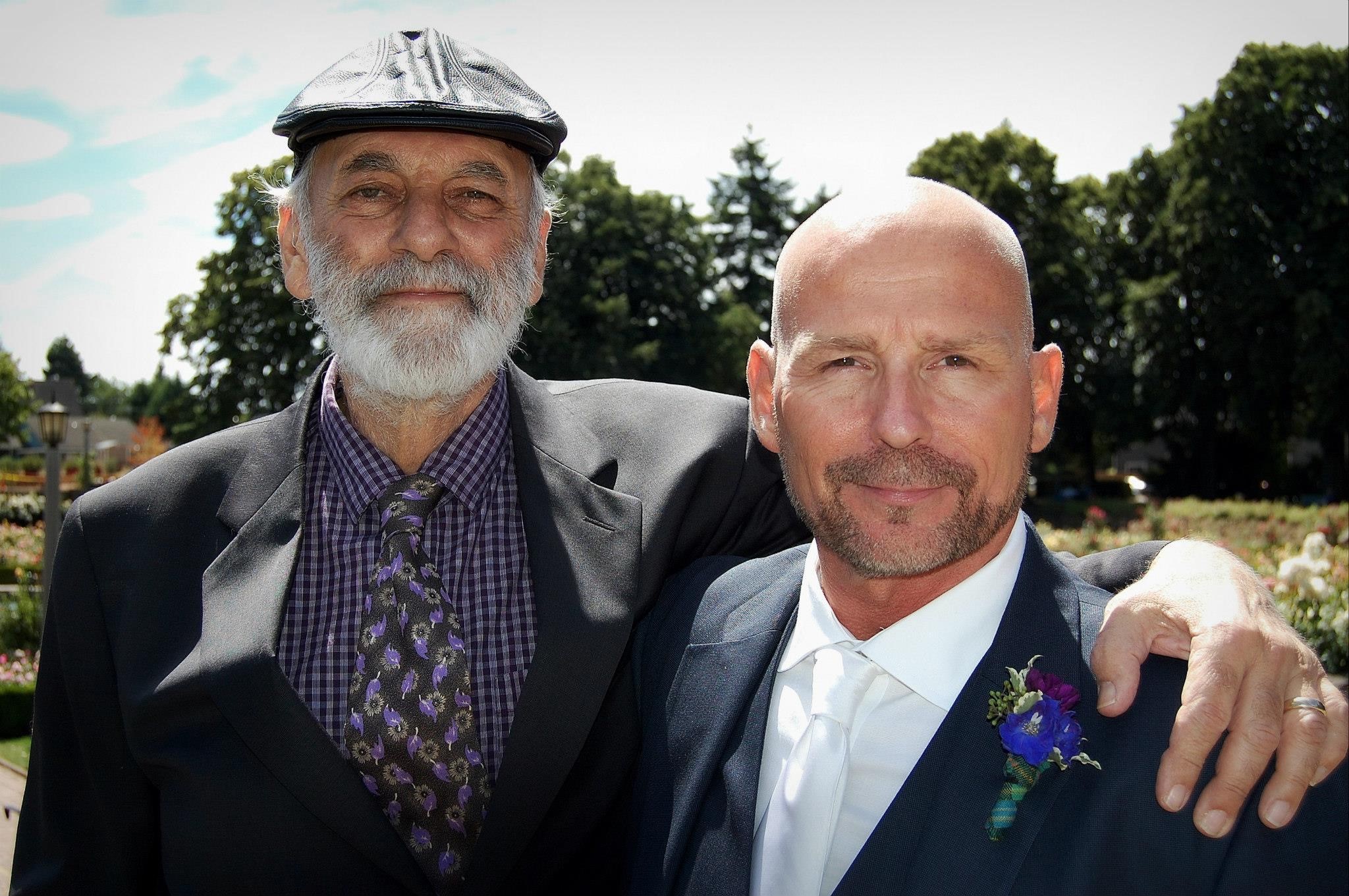 Monica took the program into prisons, and used the principles in addiction programs he managed. When he developed it into a separate entity, he was working at Cascadia Behavioral Healthcare, one of the biggest mental health providers in Oregon.

In 2005, seven years after the first meeting, Corbett approached the state for money.

"In my role as the director of both state mental health and addictions (programs), I recognized there were no clearly identified services or supports for people who were experiencing both sets of problems,” Nikkel said in an email.

Nikkel granted Corbett $50,000 to help the organization gain a foothold in the state.

“The first year he put on 80,000 miles and started meetings in virtually all 36 counties," Nikkel said.

A subsequent grant of $200,000 from Nikkel’s successor, Richard Harris, helped the organization become self-sustaining. Corbett promoted the group and Smith, who took over six years ago, a year before Monica died, expanded its breadth.

The organization has an annual budget of nearly $370,000 and 23 staffers including Smith. Its 11-member board includes well-known mental health experts, including Nikkel; Derald Walker, president and CEO of Cascadia Behavioral Healthcare; Kevin Campbell, former CEO of Greater Oregon Behavioral Health, Inc. or GOBHI; and Dr. Gina Firman Nikkel, former president and CEO at Foundation for Excellence in Mental Health Care and executive director at Association of Oregon Counties.

“Doyal has done an incredible job of increasing the budget -- he's doubled it in the last couple of years,” Nikkel said. “He did this by outreach to counties, correctional programs, residential programs, the state hospital and very significantly to the Oregon Health Plan coordinated care organizations.” They act as Medicaid insurers for nearly 1.2 million low-income Oregonians.

Peer support groups are considered to be an effective and relatively inexpensive way to keep mental and addiction problems in check.

The group fosters a fellowship that is crucial to recovery, Linfoot said. Besides the meetings, it holds regular events, like picnics and bowling parties, that have been put on hold for now.

“What we know about mental health or addiction or both is that community is key to sustaining recovering,” Linfoot said. “When you go to a DDA meeting you meet your people. … If an odd behavior comes up that’s related to your struggle, that’s not a big deal.” 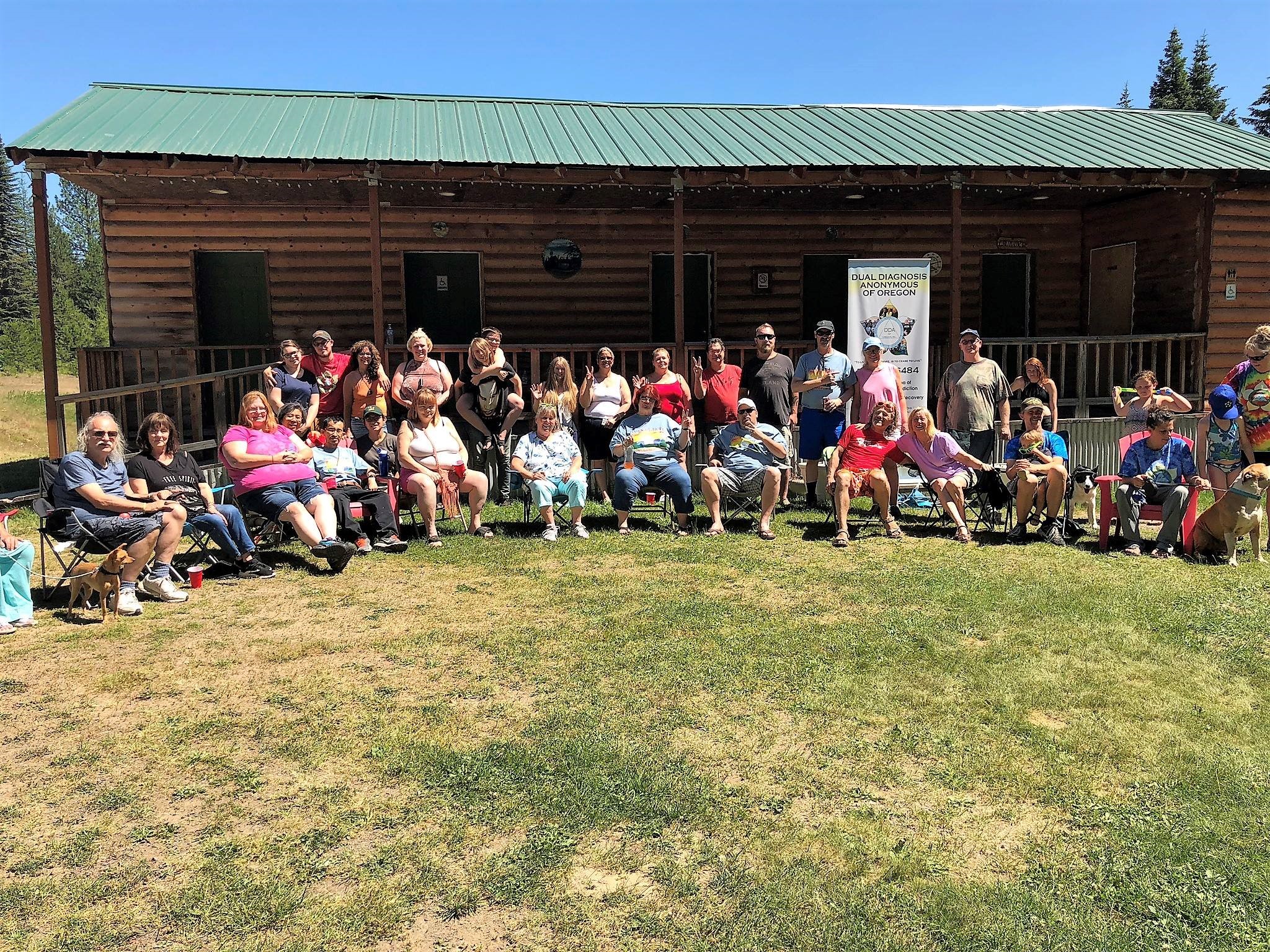 Before the pandemic, Dual Diagnosis Anonymous held regular gatherings and will do so again when it's safe./Courtesy of Doyal Smith

Relapse A Problem During Pandemic

All meetings are facilitated by people in recovery who have a dual diagnosis and adhere to the same format, which includes a reading of the preamble and steps and a discussion centered on a selected topic. A recent meeting focused on one day at a time, drawing members from Ireland, New York, Utah and Oregon. One woman asked for help to start a chapter in her area in California. Other people shared their coping strategies and their struggles staying away from drugs.

Weaks said it has been especially hard dealing with isolation during the pandemic.

Although there are only about two meetings a day, everyone in DDA, including Smith, share their contact information and are generous with their time. And they stay in touch.

Linfoot, the Clackamas County peer support coordinator, says she wakes up every morning to a text greeting from the group.

“You make a bond with these people,” Weaks said. “It’s not just when we’re on the Zoom meetings. We call each other. If you’re thinking you might have a relapse, you can call someone. In 15 minutes, the craving is over.”

He thanks DDA for his success so far. As of Wednesday, he said he’s been clean for 156 days.

“This is the longest in 20 years that I’ve been sober, Weaks said. “I’m proud of myself for the first time in a very long time .This is the hardest thing I’ve ever done in my life.”

I can't emphasize how strongly I agree with Doyal, Bob, Ally and Ryan. Dual Diagnosis Anonymous is the  first place I was ever encouraged to be myself. My true self.  I started attending when I had a short time clean. That  was in 2007. I am now a CADC III and a LCSW and am active in the peer community. There  are no words to describe my love for the program. No  matter what you are experiencing, DDA is a strong foothold. With that kind of support, anything is possible.

DDA is one of the "Crown Jewels" of Oregon's much maligned mental health system.  Simply put DDA provides hope and saves lives.