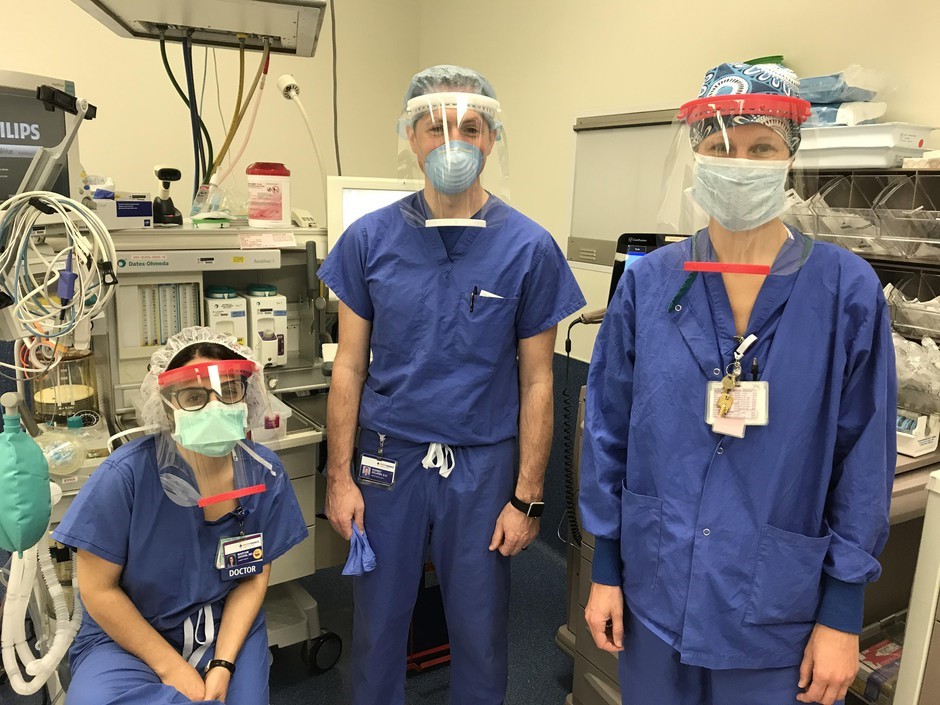 Citing unsafe conditions, health care workers in Oregon for weeks have been pushing for greater transparency around how much personal protective equipment hospitals have on hand.

But those demands haven't been satisfied, and it's unclear if they ever will.

Officials note that equipment tracking is a new job for them, and they're trying to make the system better. Their intended fix, however, won't satisfy healthcare workers' concerns.

Since May 5, the state has supposedly been tracking stocks of masks, gowns, respirators and face shields for each hospital. But many hospitals don't appear to be entering accurate facility-level data into the system.

"It's clear that there's discrepancies and it's also clear that hospitals were given free rein to determine their own numbers — and that raises questions about who is actually accountable," said Kevin Mealy, a spokesman for the Oregon Nurses Association, after reviewing the data.

State officials had publicly vowed to monitor safety conditions and protective equipment supplies at hospitals and health care providers when Gov. Kate Brown on April 23 announced she was allowing them to resume non-urgent procedures ranging from teeth-cleaning to hip replacements.

"I think it's critically important and we will be watching to make sure that staff on the front line have access to the appropriate level of personal protective equipment, mask, gloves and gowns," Brown said during a press conference.

The data captured by Oregon's system for tracking hospital protective equipment supplies is ill suited for seeing if hospitals are meeting their obligations, however.

The Oregon Health authority "is aware that the current PPE data captured in (the state data system) is not as meaningful or useful as it could be," agency officials said in a statement.

The Oregon Association of Hospitals and Health Systems is aware the data its members report could be improved.

"We are working with OHA to refine the process of publicly reporting the PPE supply, which we know is critical to keeping our hospital workforce safe," said Becky Hultberg, the president and chief executive officer of the group.

Even months into the pandemic, frontline workers say hospitals still aren't providing them with enough equipment to meet longstanding safety protocols set before shortages led them to be relaxed.

Val Griffeth, a physician at Oregon Health & Sciences University, helped launch the national doctor group, Get Us PPE, in March. On Wednesday, she said the unsafe practices she's seen haven't changed at all. "We're still being encouraged to use one N95 (respirator mask) per shift. There's been some talk of using them even longer than that by storing them Tupperware containers."

Sharon Meieran, an emergency room doctor who serves on the Multnomah County Board of Commissioners, is among the physicians tracking the problem. "We are hearing loud and clear that frontline workers are not receiving adequate and safe supplies of PPE in many facilities," she said.

The Oregon chapter of the American College of Emergency Physicians recently released a survey of their members in which only one in five who lived with family members or other people felt safe returning home after their shift. The survey included individual comments as well.

"I have not received a single new mask from the hospital and we have no clear trajectory when PPE will be available," one doctor said, adding that he's been reusing masks that his family sent him. "I feel like I can't speak up about this for fear of retribution by the hospital."

One out of six confirmed coronavirus cases is a healthcare worker. At the Portland VA hospital, 28 doctors, nurses and other employees and seven patients tested positive for the virus following the admission of a single undiagnosed patient on April 29, officials there say.

"I think it's possible" that shortage-driven reuse of respirators contributed to the facility's outbreak, said Dr. Chris Pfiefer, the Portland VA infection control director. But he doubts reusing masks is the primary contributor to the outbreak's spread, saying, "Hospitals all over the country are doing this."

About a month ago national VA administrators put out a directive that to conserve supplies each doctor should use no more than one respirator mask each week to preserve supplies — a huge change from the pre-pandemic standard of one used per patient. That directive was dropped two weeks ago, however, and in Portland VA officials now allow four-to-six respirators a day in the wake of the outbreak, Pfiefer said.

The hospital group says supply problems remain. "Hospitals are ... working with the state to keep improving supply chains and PPE stockpiles, which will take time both here in Oregon and across the country," said Hultberg, the group's CEO.

Alex Skog, a Portland emergency room doctor on the board of the Oregon chapter of the emergency physicians' group, said he doesn't doubt hospitals' good intentions. Part of the problem is a lack of knowledge about to balance safety and supplies, he said, "And I think that's reflected in the varying practices of different providers, different hospitals, even different states in the US right now."

Trying to deduce whether each Oregon hospital has enough protective equipment is impossible under the system the state uses to track hospital capacity and supplies. Called HOSCAP, it's intended to keep ambulance providers and pandemic planners informed.

The first request to provide data on supplies and hospital capacity to help pandemic planners came via the federal Health and Human Services Department on March 29. But a month later a state survey found many Oregon hospitals were not complying with the request.

On May 4 Oregon Health Authority Director Pat Allen sent a letter to hospital administrators saying the state formally would take over the job of reporting for them, using HOSCAP, but "hospitals would remain responsible for data accuracy and for submitting daily updates into HOSCAP to meet the HHS reporting requirements."

The resulting data appears to lack accuracy. Among the issues:

PeaceHealth reports the exact same supplies for multiple hospitals in its chain, and its entries often remain unchanged for weeks at a time. But the system maintains its reporting is accurate.

"We state the level needed to maintain the required amount on-hand as the minimum standard, and increase supply beyond those stated levels as needed based on demand," said Jeremy Rush, a spokesman for the system, in an email. "We restock to that number every day, so yes, it does stay the same as we resupply constantly."

He added that "Legacy has sufficient PPE on hand, complies with all of the federal and state guidelines for the use of PPE for COVID-19, and provides the appropriate PPE for the care environment to all providers and staff."

Under Brown's requirements announced April 23, large hospitals must certify that they have enough protective equipment to last 30 days. Small hospitals must attest to a 14-day supply.

But hospitals are employing standards for using safety equipment that have been relaxed by the federal government in response to shortages, for instance allowing one mask per day, or even multiple days. Despite some reported easing of the shortages, those practices have not changed, doctors say.

"Hospitals are attesting to the fact that they have adequate PPE, and yet front line providers are not seeing it," said Meieran.

She was echoed by Mealy, the nurses' spokesman. "Hospitals are saying they have enough PPE to restart surgeries. But they're also demanding that caregivers ignore patient infection control protocols, which is one patient, one mask, one use ... You can't say that you have enough (safety equipment) while using it in an unsafe way in order to preserve the supplies."

Hargunani, the state's Chief Medical Officer, said it's up to the hospitals to determine if they are following safety guidelines on protective equipment. She said state workplace regulators at Oregon OSHA have the job of overseeing that.

Hargunani said to make the data more useful, the state intends to ask for hospitals to stop reporting actual raw numbers of equipment, and instead report how many days it expects current supplies to last.

Meieran, however, said the state should collect both categories — days of supply and actual numbers of masks, gowns and shields —so that the public can be sure the safety equipment is being properly used.

Meieran said the state's new rules "have provided no standardized definition of appropriate PPE for any situation." The result, she said, is an inequitable system that "in too many instances cannot provide assurance that patients or providers will be protected."

This story was first published by the Portland Tribune and is posted here under an agreement among more than a dozen media outlets to share coronavirus coverage.