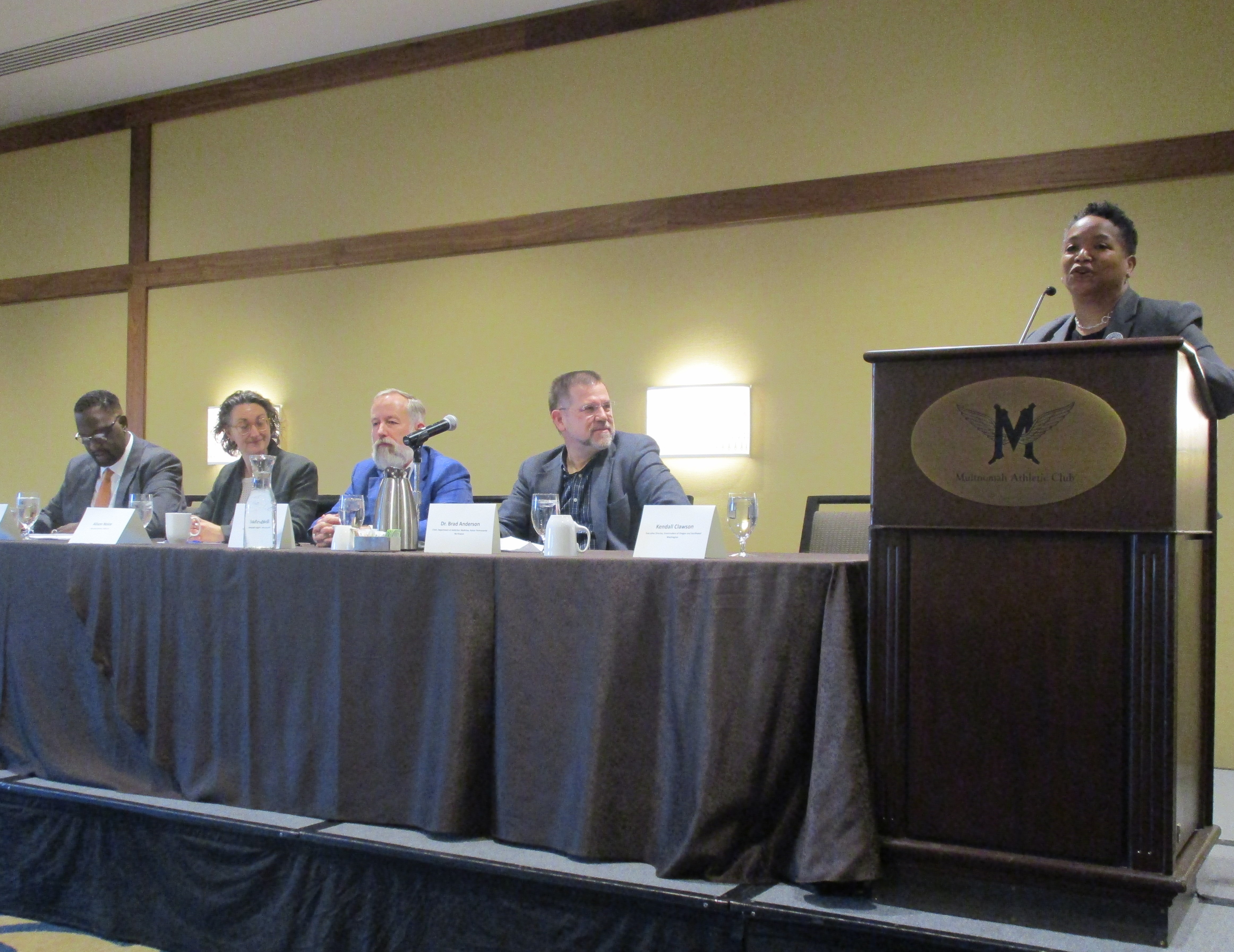 Oregon has one of the highest drug and alcohol addiction rates in the country. But the solutions will not come quickly or easily.

Four advocates and medical professionals spoke about the state’s addiction crisis on Wednesday at a breakfast meeting at the Multnomah Athletic Club in Southwest Portland sponsored by the Oregon Health Forum, an affiliate of The Lund Report.

The big takeaway: More access is needed to treatment, and the public needs to realize that addiction is a chronic condition that needs long-term attention.  Addiction services are often underfunded. Legalized marijuana – and the resulting blitz of advertising – makes youth access easier. Burnout is high among addiction treatment workers and pay is low.

“You can see ads that Coors Light has established themselves as the official beer of Saturday morning,” said Dr. Brad Anderson, chief of the Department of Addiction Medicine for Kaiser Permanente Northwest.

He encouraged the audience of about 110 attendees to compare buildings in Portland that treat addiction with those that treat other life-threatening diseases like cancer. Usually, cancer treatment centers are in state-of-the-art facilities but addiction services are in older buildings, he said.

Patients need to get prompt treatment for addiction services, with the same type of response that patients with chest pains receive, he said. The health system needs to consider the savings that come from addiction treatment instead of the costs, he said.

Oregon has one of the highest addiction rates and is among the worst states in providing treatment, data show. In 2017, Oregon had the highest rate of marijuana and pain reliever abuse. The state also ranked second in methamphetamine use and fourth in cocaine use, according to a 2019 Oregon Criminal Justice Commission report. The state also ranked third in its rate of people needing but not receiving treatment for alcohol and drug misuse.

“We are in the midst of an unprecedented health crisis in this state,” Marshall said.

Dr. Reginald Richardson Sr., director of the Oregon Alcohol and Drug Policy Commission, said a new state plan was crafted with input from a dozen state agencies and others with expertise in addiction treatment and prevention.

“For the first time ever, we began to think of ourselves as a system,” he said.

He said he’ll be presenting the plan to Gov. Kate Brown this week. The 89-page document estimates that Oregon is currently spending about $6.7 billion on issues related to substance misuse, but less than 1% is going towards prevention, treatment or recovery for people with substance use disorders. The rest goes toward social and health problems and regulation costs for alcohol and drugs.

The plan calls for looking at potential revenue sources, such as alcohol and tobacco taxes, and shifting money away from ineffective programs. The plan’s four main goals are to put a statewide system in place and increase access to prevention, treatment and recovery for Oregonians across their lifetime.

Marshall said funding needs to be directed towards the plan so it can be implemented. He said raising the price of alcohol 10% across-the-board would reduce consumption and bring immediate public health benefits such as a reduction in incarceration rates and children in foster care.

Marshall said he’s disappointed that no significant action is taking place this legislative session to put the plan into action. He said Oregon Recovers is considering making a formal request for a special session to address addiction this year instead of waiting for the 2021 session.

Brown issued an executive order in 2018 that highlighted the state’s addiction crisis and put the commission and advocates to work on the plan.

Richardson defended waiting until the 2021 session.

“I’ve come to believe that’s not necessarily a bad thing because if you look at the plan, there are a number of systems we need to get moving in the right direction,” Richardson said.

“Moving it to the 2021 session allows us to build the kind of support we need to move the plan comprehensively,” Richardson said, adding that in a short session there are limited opportunities to amend a bill.

The panelists also touched on workforce needs. Alison Noice, executive director of the nonprofit CODA, said how the community talks about addiction can motivate people to enter the field. Noice said the work is rewarding, but financially challenging for nonprofit organizations.

“For those of us in the nonprofit arena, we rely on, frankly, the charity of our employees to do this work,” she said.

The panel was moderated by Kendall Clawson, chief executive officer of Grantmakers of Oregon and SW Washington.

Feb 19 2020
News source:
The Lund Report
Keywords:
addiction, CODA, Mike Marshall, Brad Anderson, Reginald Richardsonm Iregin Alcohol and Drug Policy Commission, Oregon Recovers
×
This article is for premium subscribers. If you are one, please sign in below.
You can see two more premium stories for free. To subscribe, click here. We depend on premium subscriptions to survive, and they are tax deductible.
Sign InGo Premium Not now