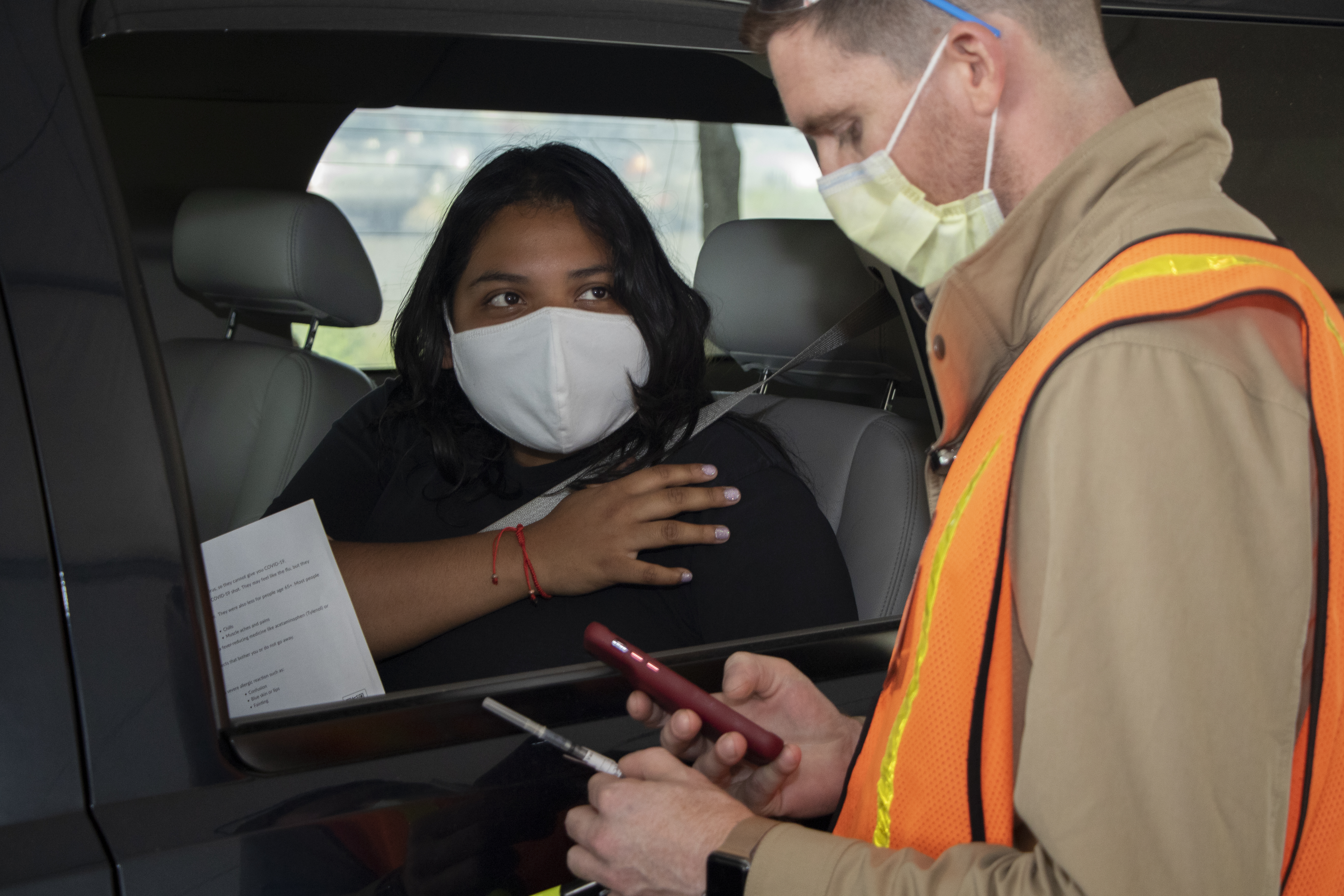 Latinos were among the patients at an OHSU vaccination clinic in Hillsboro in May./Josh Andersen/OHSU

Oregon appears to be just a few days away from meeting Gov. Kate Brown’s target of vaccinating 70% of people age 18 and over, which would trigger a broad statewide lifting of COVID-19 restrictions.

Earlier in the month, Brown had set June 21 as the goal for reaching 70%, but by late Monday the state was still more than 44,000 vaccinations short of that. At the current sluggish rate of about 9,000 vaccinations a day – including second doses and vaccine-eligible people under age 18 – the state may hit the 70% mark by early next week.

The daily volume of vaccinations is now at the same trickle it was at the launch of the public vaccination campaign in late December 2020, when the state had meager supplies of vaccine on hand. At the peak of enthusiasm for vaccination, 40,000 to 50,000 Oregonians a day were getting the shot.

The pace has slowed because health care providers, state officials and others are having increasing trouble persuading the unvaccinated to roll up their sleeves. Large segments of the population in the state remain unvaccinated, in both urban and rural areas.

People in rural Oregon have proven deeply hesitant to get vaccinated. In Umatilla County, only about 40% of the population aged 16 and over has been vaccinated, according to the state’s database. In Douglas County, the rate is nearly 44%.In Klamath County, it is 45%.

Those rates contrast with the most highly vaccinated counties – mostly urban -- where over 65% of the 16-plus population is vaccinated: Washington, Hood River, Benton, Multnomah, Lincoln, Deschutes and Lane.

As of Monday, nearly 69% of Oregonians 18 and over have been vaccinated, according to the federal Centers for Disease Control and Prevention database, said Oregon Health Authority spokesman Rudy Owens. The state uses the federal metric, rather than the 16-plus numbers, as the goal post for dropping most COVID-19 restrictions.

“There was always awareness that building vaccine confidence among those who may have concerns about the proven benefits of vaccination would prove more difficult as the number of unvaccinated Oregonians declined,” Owens said. “OHA continues to work on reducing logistical barriers for those who have difficulties scheduling their vaccinations.”

Health care providers and the state are making vaccination gains in communities of color and will continue to focus on under-vaccinated areas, which include urban areas, such as east Multnomah County, Owens said.

Once the state crosses the 70% threshold for people age 18 and above, the state will drop its county-by-county risk level system and scrap statewide masking, business capacity, event size, social distance and other limits, regardless of the vaccination rates in individual counties. Masking and some other restrictions will remain in place for health care facilities, public transportation, airports and some other settings.

At that point, it will be up to local health officials in each county to impose restrictions if they want to.

Some health experts have said that once the state drops its restrictions, many remaining unvaccinated people may not bother getting a shot because they will believe the crisis has passed.

Aside from continuing to urge unvaccinated adults to get a shot, health experts are also turning their attention to children age 12 to 15, who became eligible last month for the Pfizer vaccine. Studies are underway for children younger than that.

Jun 21 2021
News source:
The Lund Report
Keywords:
vaccine, Kate Brown
×
This article is for premium subscribers. If you are one, please sign in below.
You can see two more premium stories for free. To subscribe, click here. We depend on premium subscriptions to survive, and they are tax deductible.
Sign InGo Premium Not now