By:
Jayati Ramakrishnan of The Oregonian/OregonLive 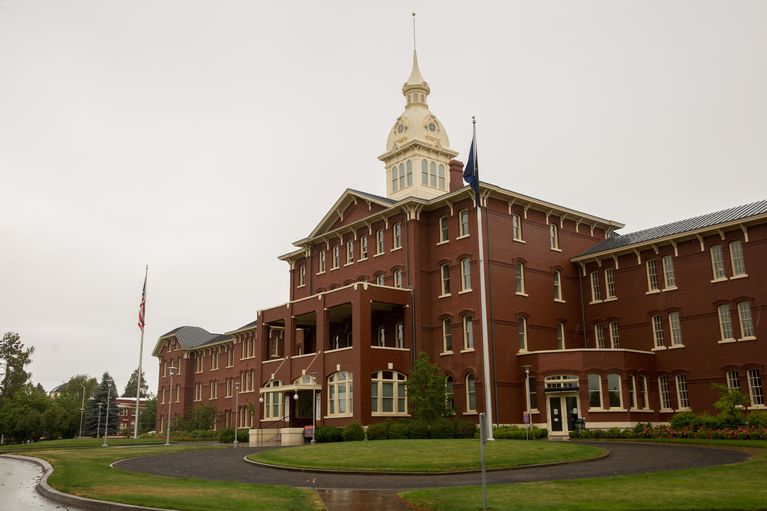 The last year has placed the Oregon State Hospital in a crucible, from which it’s not likely to emerge any time soon.

Since the coronavirus pandemic began, the psychiatric facility has faced serious staff shortages that reached a peak Thursday when the state agreed to help staff the hospital with 30 National Guard members.

While hospital officials have managed to dodge large-scale coronavirus spread that affected many other institutions, they have had to suspend admissions three times for outbreaks. They also struggled to discharge patients fast enough to make room for new ones, leading them to suspend admissions two more times. They also have implemented an emergency staffing plan to deal with the large percentages of employees out on pandemic-related leave.

But behavioral health workers say the crisis extends far beyond the coronavirus pandemic, reflecting Oregon’s failure to address problems at multiple levels they knew about long ago.

The Oregon State Hospital currently has just over 600 patients, nearly 55% of whom are there under so-called “aid and assist orders.” Those patients have been accused of a crime, but have been determined unable to aid in their own defense, and have been sent to the hospital until they are deemed able to do so. Another 40% of patients are considered “guilty except for insanity,” and less than 5% are civilly committed or there for other reasons.

The “aid and assist” population is the fastest-growing group of patients coming into the hospital. Between January and March of 2021, 94% of new patients fell within that category.

“There are a lot of county (district attorneys) and law enforcement agencies trying to arrest their way out of a mental health crisis,” he said, “and we know that doesn’t work.”

Lorrie Walker, a retired security guard who worked at the state hospital for 28 years, said the situation reflects a long-term failure by the state and hospital administrators to listen to what staff have to say.

“A lot of the decisions being made at the higher levels,” Walker said, “Nobody seems to know why they’re happening.”

Impact Of The Pandemic

Since April 2020, the hospital has faced a string of challenges.

Hospital employees were concerned about the daily risks of working in a hospital environment during the pandemic. And, within the first month of the pandemic, three staff members tested positive.

While patients were tested on admissions and monitoring units, the hospital did not provide coronavirus tests for staff members until October, when the first patients tested positive.

Starting in early 2021, the hospital began offering the vaccine to all employees and patients. The hospital also responded by staggering admissions, quarantining all new patients for two weeks and limiting staff members who work on the new admissions or quarantine units to those areas in order to limit potential spread of the virus. But staff on other units tested positive for the virus, spreading it to patients.

Since April 2020, the hospital paused admissions at least five times, alternately citing a need to slow the spread of COVID-19 and to make room for the influx of patients.

Following a lawsuit by Disability Rights Oregon in 2002, the state hospital was subject to a court order that requires them to admit patients in jail to the hospital within seven days, so they don’t languish in a cell indefinitely.

Concurrently, patients were left for long periods of time in community hospitals as they waited for a bed to open up at the state hospital. Community mental health providers said that these stays often exceeded 100 days — an issue that existed long before the pandemic began.

As the state hospital deals with those issues, officials have been faced with an unprecedented staffing shortage. In November, administrators implemented a five-step emergency plan: the first three steps pulled staff from around the hospital to provide direct care for patients. Steps four and five were implemented within a day of each other last week — asking for assistance from managers around the state and nurses from the National Guard.

The state turned down the request for National Guard nurses, but agreed to send 30 members who will begin two weeks of training on Monday. They will learn how to work directly with patients, including training on de-escalation and behavioral emergencies, state hospital spokesperson Rebeka Gipson-King said.

Gipson-King said in April that nurse managers and other hospital administrators were being dispatched to work directly on units — an assignment that was made official last week. But several staff members, who asked not to be identified for fear of retaliation, have said they’re not observing those managers actually doing that work.

Oregon State Rep. Rob Nosse, vice-chair of the House Behavioral Health Committee and a member of the Ways and Means committee, said he’s talked with hospital administrators about how to deal with the staffing crisis in the short-term.

In a May 12 letter to Nosse, Oregon Health Authority Director Patrick Allen and State Hospital Superintendent Dolly Matteucci said that to immediately address staffing shortages, the hospital would require an additional $18 million. That amount, they said, would fund 248 permanent positions.

But Nosse said that during a discussion with Allen and Matteucci on Tuesday, they decided to wait to seek additional funding for staffing. Nosse said they agreed to wait until a pandemic provision that allows employees to take leave to care for children expires.

“Once that’s done,” Nosse told The Oregonian/OregonLive, “I think the situation will be a little more stable, and we’ll be better able to evaluate what’s going on in terms of patient flow, staffing, and the severity of what patients there are experiencing.”

Nosse said they would likely revisit additional funding in the fall.

Kim Thoma, an administrative specialist, union representative and longtime hospital employee, said the decision was frustrating, especially as so many people quit their jobs from the strain of the last few months.

She said the problem won’t go away when the childcare leave agreement expires, as administrators hope.

“We had low staffing before — what makes you think that’s going to fix it?” she said in a Thursday phone call with The Oregonian/OregonLive. “We can’t get people hired fast enough to fill those holes.”

Gipson-King said on Tuesday that in the next few months, the health authority and hospital administrators would create a long-term staffing plan they hope will alleviate issues unrelated to COVID-19.

After that, she said, they would bring the question of funding that plan to legislators.

Nosse said there is a $500 million healthcare package being considered, which focuses on the entire behavioral health system — from $180 million for community mental health programs to housing to loan forgiveness for people of color who want to study counseling or therapy. The package also includes a proposal to open a secure residential treatment facility on the state’s Junction City campus. Nosse said that would free up space at the state hospital to house more patients coming in through the criminal justice system.

Thoma said staffing has been a challenge since at least 2011, when the hospital moved into its new building and dissolved a program for severe patients that was required by the U.S. Department of Justice.

Thoma estimated that at the beginning of the pandemic, the hospital had at least 300 fewer staff than in 2011.

“We can advocate for our programs to get safer staffing levels,” Thoma said. “But sometimes you feel like you’re talking to a brick wall.”

Critics say that increasing the hospital’s capacity doesn’t get to the root of the problem.

“They can’t staff the units they have right now,” Stenson said. “The answer can’t be hire, hire, build, build. The answer has to be to find a way to treat people in their community.”

He said the lack of resources in individual counties for underlying problems, such as homelessness and insufficient community treatment options, puts more pressure on the hospital to admit patients who shouldn’t be there.

“People who can’t get housing, can’t get mental health care — those are relatively cheap and relatively easy to fix,” said Stenson of Disability Rights Oregon. “But Oregon has never come close to investing in those options.”

According to the recommended budget for the 2021-2023 biennium, Gov. Kate Brown proposed a 26% increase in funding for the hospital to $625 million. Conversely, the proposed increase for community diversion programs is only about $20 million.

“The funding for the highest level of care for a tiny fragment of seriously ill people is already a huge portion of the entire budget,” Stenson said, “and we’re increasing that fund much faster and much more than community-based services.”

This is not the first time the state hospital has faced scrutiny over unsafe conditions. The U.S. Department of Justice in 2008 found several civil rights violations, including a failure to provide appropriate psychiatric care, unsanitary conditions that led to disease outbreaks, patients put in seclusion indefinitely, nurses working unsustainably long hours and more than 400 cases of patients assaulting each other in a single year.

The investigation followed a series of problems over the previous few years, with stories of mistreatment and hiring problems reported back to 2003.

In 2004, hospital superintendent Stanley Mazur-Hart resigned following a string of high-profile problems — a patient escaping and a state investigation into a psychiatrist’s abuse of a patient.

In 2005, the Oregon Legislature authorized nearly $460 million to build new facilities — those in Salem and Junction City. It also hired a new chief medical officer.

Following the 2008 federal investigation, the U.S. Department of Justice made several recommendations to the state hospital.

Those recommendations included revising how serious incidents were investigated, improving and updating their psychiatric assessments and re-assessments of patients, and ensuring adequate nursing care for patients.

“This is not new information,” Stenson said. “The state did not follow through. They dropped the ball on their commitment here.”

State hospital spokeswoman Gipson-King said following the 2008 report, the Department of Justice issued an extensive “continuous improvement program,” which the hospital followed for several years. She said two DOJ consultants visited the hospital regularly until 2011 to help them execute the plan.

Now, as the hospital prepares to train 30 National Guard employees and several state managers to help with patient care, Thoma said staff are increasingly worried about what the next few months will look like.

“How severely does someone need to get hurt again?” she said. “I worry about our staff, our patients. Long-term, what kind of effect does this have on their ability to recover? That’s our common goal, and it just feels like it’s hurting them.”