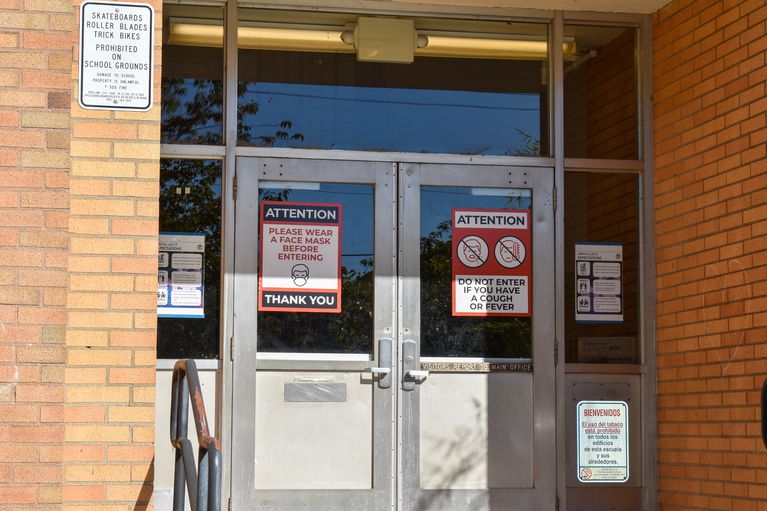 In response to the delta variant of COVID-19, Gov. Kate Brown has ordered the Oregon Health Authority and the Oregon Department of Education to create a rule requiring masks for anyone in an indoor school setting this fall. Once the rule is created, it will also affect summer programming, according to ODE.

Over the last few days, school district leaders around the state have reacted to the news. In Vale, in southeastern Oregon, Superintendent Alisha McBride said staff were surprised; in the southwest, Winston-Dillard School District, disappointed.

In statement after statement, district leaders lamented the loss of “local control” to make decisions around health and safety for their districts. The reaction has been covered by local media across the state, including in the latest Oregon education newsletter from the Oregon School Boards Association.

And in Estacada, Superintendent Ryan Carpenter said he’s heard from “parents, teachers, support staff, and community members” frustrated with Brown’s decision and asking him to ignore the order. He said the district will not violate state orders, and suggested community members write to ODE and local representatives to share their thoughts on reopening.

“The lesson is: even if we receive an outcome that we do not desire, it does not give us reason to break rules, violate policy, compromise our values, or diminish the quality of service we are working so hard to develop,” Carpenter wrote.

Like leaders in Roseburg and Klamath County, Carpenter said he will continue to lobby for local school districts to have more control over such health and safety policies.

These statements overwhelmingly came from the state’s smaller districts. But not all of them.

In Medford, one of the largest districts outside of the Willamette Valley, Superintendent Bret Champion cancelled a board meeting scheduled for Monday night where the district’s mask plan was to be announced. Like other districts, Medford received thousands of responses to a survey on face coverings.

“We planned to share our locally-developed mask guidance with our Board of Directors Monday night, but since we no longer have the option to provide our own guidance, we are canceling Monday’s meeting,” Champion wrote. “To those who submitted comments for the meeting, we will be forwarding those to the state.”

Other districts, including Bethel and North Clackamas, said they will update their policies once ODE publishes the rule.

In an email to OPB, Charles Boyle, Brown’s deputy communications director, said the rule is a way for districts to be able to offer full-time instruction with “minimal disruptions.”

“Our office is continuing to have conversations with school district leaders,” Boyle said.

“Given the ongoing spread of the delta variant, reevaluating the need for K-12 masking requirements would be contingent on a substantial decline in COVID-19 numbers across the state, or the authorization of vaccination for children younger than 12.”

Some of Oregon’s largest school districts, including Portland Public Schools, had not yet announced mask plans for the fall before Brown’s announcement. Some continue to seek feedback from families and school community members in the planning process, including Salem-Keizer. The district will host two engagement nights later this week. The PPS board will hold a work session with public health experts Wednesday.

Even though the rule is not yet in place for masks in schools, some districts are already starting to return to mask requirements for the rest of the summer, including PPS (which had already required masks for K-8 programs) and the Baker School District in Eastern Oregon.

As of Monday, Baker school officials are requiring face coverings indoors. In a statement shared on Facebook, the district mentioned an increase in COVID-19 cases, according to the Baker County Health Department. In the statement, Baker Superintendent Mark Witty said he will continue to advocate for decisions to be made locally, in conjunction with health officials who serve the area.

“While we genuinely empathize with those in the community who are expressing disappointment with the recent turn of events, our top concern remains keeping students and staff safe and in school in-person,” said Witty, according to the post.

“We are committed to doing what we can to keep our schools open.”