Oregon On Precipice Of Another COVID Wave, Modeling Suggests 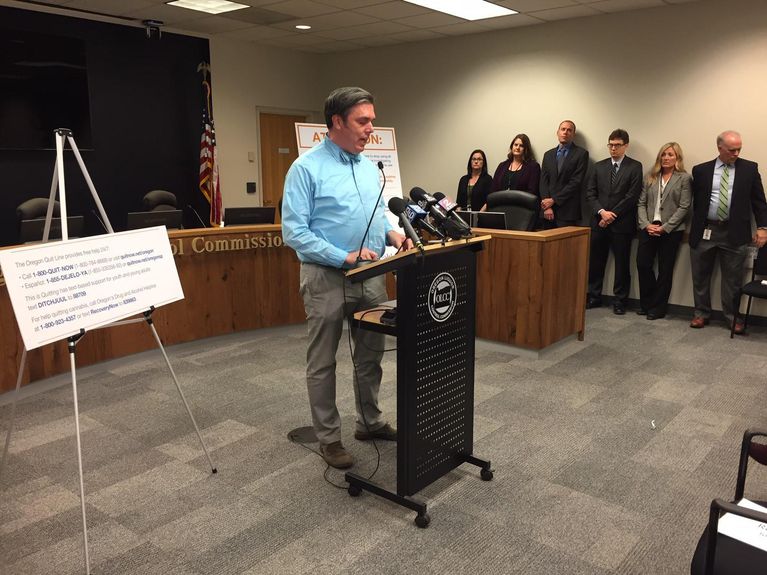 COVID-19′s spread in Oregon is on the verge of another deadly wave, with new modeling suggesting the state could see nearly 1,200 new cases and almost 100 new hospitalizations every day by mid-August.

Even with more than half the state’s population considered immune via either vaccine or having contracted the virus previously, state health officials say the fast-traveling delta variant has once again left Oregon at a crossroads. The answer to that onrush, state epidemiologist Dr. Dean Sidelinger said Friday, is for eligible people to get vaccinated and for everyone to mask up while in indoor public spaces.

“If you’re not willing to do one of those, you need to change your plans or plan on getting COVID-19 and maybe plan on getting very ill,” Sidelinger said in a press conference.

The messaging comes as the nature of the delta variant’s potential is becoming better understood. New data from the Centers for Disease Control and Prevention suggests that even vaccinated people can become potent carriers for the variant. That’s prompted new guidance that people should wear masks in public places regardless of vaccination status.

The data suggests that every case of COVID-19 in the state is now spreading to more than one person on average — 1.58 to be exact — a worrisome scenario that can lead to exponential spread. That’s far slower than experts expect the virus would be spreading without vaccines and other tools, but faster than the state has seen since the last rise in the spread in April.

As a result, new cases and hospitalizations are both on the rise, with hospital occupancy increasing 77% between July 20 and 28, according to the state figures. If the trend goes on unabated, officials believe Oregon will see a daily average of 1,170 new cases between Aug. 4 and Aug. 17. This week alone, the state has already logged more than 1,000 new daily cases repeatedly.

The modeling also suggests hospitalizations could increase to 95 people a day by Aug 17, a daily increase that would account for nearly a third of the total 298 people currently hospitalized for COVID in the state.

In the face of that threat, Sidelinger continued to press Oregonians to get vaccinated and resume widespread mask use in public.

“I’m extremely concerned right now… but extremely grateful that we have the tools to help in this fight,” he said. Addressing unvaccinated Oregonians he added: “You’re at greater risk right now, probably, than at any point in the pandemic if you’re getting together with others.”

Despite the risk, the state has shown little willingness to resume the mandatory mask-wearing or to resume restrictions on business operations and social gatherings. Pressed repeatedly on what might have to happen for that to change, Sidelinger questioned whether a mask mandate would be more impactful for skeptical communities than the recommendations the Oregon Health Authority currently has in place.

“The requirement in and of itself… doesn’t change people’s behavior,” he said. “I need people to face the situation that’s in front of them.”

Sidelinger said health officials would continue to monitor hospital capacity and daily hospitalizations as they decide whether new rules are necessary.

Brown has also been leery about resuming restrictions, though the new modeling suggests that the spread of COVID-19 was quietly increasing even before she dropped the remaining restrictions on June 30. Brown’s administration has opted to put the onus on local health officials to develop restrictions.

“Vaccination is clearly our best defense against the Delta variant,” Charles Boyle, the governor’s deputy communications director, said in an email Friday. “Oregonians have been through so much this past year and our businesses have shouldered huge burdens. While we have learned not to rule anything out, we also know that locally-driven response efforts are most effective at this stage in the pandemic to reach unvaccinated Oregonians.”

Brown has taken some steps in recent days, announcing Thursday that masks would be required in schools when they resume and mandating masks in many state agencies. Boyle said the governor was “examining” actions taken by the Biden administration and the state of California, which both mandated vaccines for public workers. Brown is “determining what further actions can be taken in Oregon,” he said.